They’re making a ‘Flying Boxcar’ plane into a mobile coffee shop. Because it’s too cool not to. 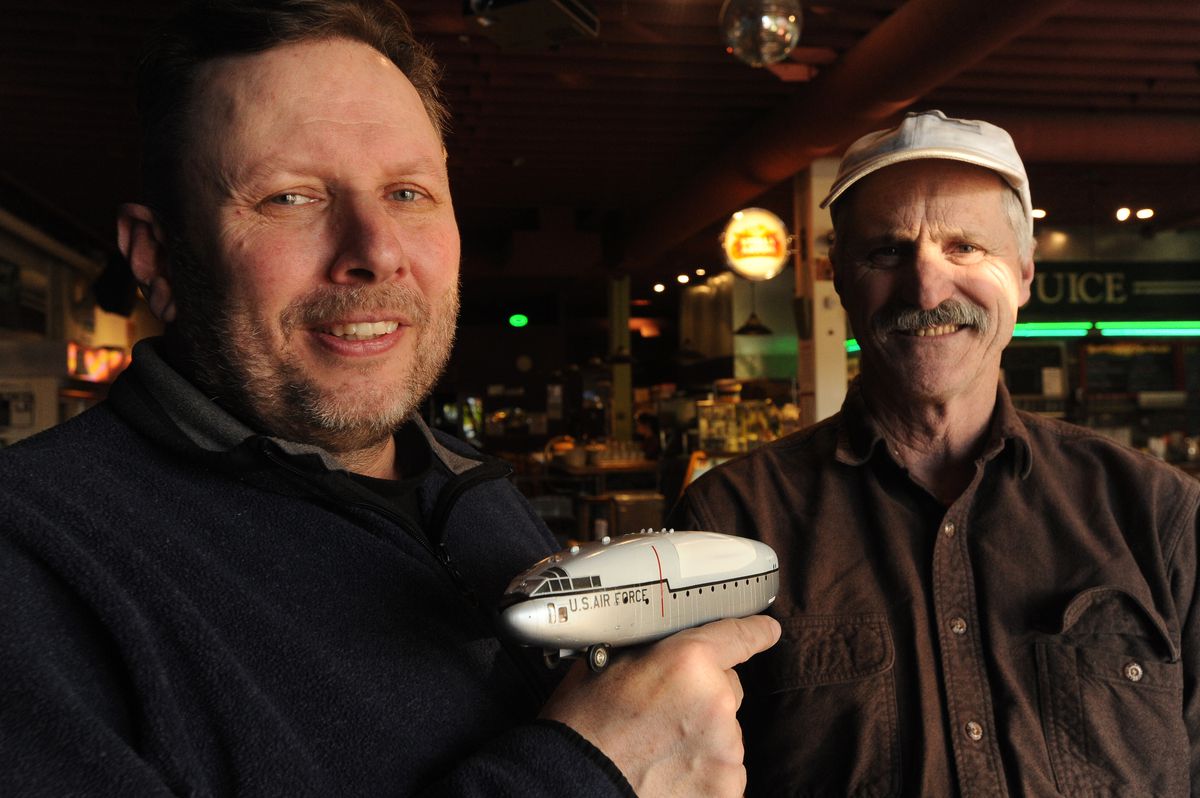 James Morris and John Will show a model of C-119 Flying Box Car they plan on turning into a road legal vehicle with a café and gallery to support veterans at Organic Oasis in Anchorage, Alaska on Thursday, Feb. 8, 2018. (Bob Hallinen / ADN)

James Morris and John Will show a model of C-119 Flying Box Car they plan on turning into a road legal vehicle with a café and gallery to support veterans at Organic Oasis in Anchorage, Alaska on Thursday, Feb. 8, 2018. (Bob Hallinen / ADN)

It started, like so many unlikely tales, with two bored guys sitting in a vehicle.

John Will and Jim Morris run aircraft de-icing equipment, but on this day there was no ice, so they were driving around  the Ted Stevens Anchorage International Airport looking at airplanes, especially an old military cargo plane called a C-119 Flying Boxcar.

It's a humble craft—a big, bulbous rectangle with wings on top—built to carry vehicles, troops or guns, and retired by the Air Force more than 40 years ago.

It was a random comment, but Will said it made his head explode. This had to be done.

I got a variety of answers to that question.

"It's about the only plane you can do it with," Morris explained. "Most planes are round."

"I like building weird things," Will said. "I'm itching to get on this."

Morris explained that the driver's seat would be in the restored cockpit, high above the road.

"That's just the part—we've got to do this," Morris said.

The excitement spread. Now there is an official non-profit corporation, a publicity person and a fundraising plan. Even a mission statement.

"This offers something to catch folks' eyes, and something to bring pride in our history, and it is completely improbable," said Sonya Senkowsky, who is helping out.

Once the airplane is a bus, the group could use it as a mobile café, a gallery, a museum, and a stage for outdoor musical performances. Clam-shell doors open the back, where the jeeps and howitzers would once have driven in.

The plane could tour around Anchorage raising money for military families who need tickets to visit hospitalized loved ones.

A good cause, for sure. But the real reason?

"It's just something that's never been done before," Morris said.

These are the guys to do it.

Will was the crew chief on an Air Force refueling plane, but now he is a musician and, as he puts it, a fabricator.

He built a rolling ball sculpture that stands at the entrance to the Organic Oasis restaurant in Spenard. Billiard balls perpetually spiral and drop through fanciful pathways. You can't stop watching it.

Will made the machine of cast-off things. There's a a satellite dish and trash compactor in there, somewhere.

At his place up the Eagle River Valley he gathers reclaimed materials to weld together into new creations—currently he is making art of an old player piano. A two-car garage that serves as his shop is nearly full.

"There's a lot of stuff around here. I love equipment and weird things and people send them to me, friends and family. Old plow blades and different things I take apart and utilize somehow. All kinds of weird stuff," Will said.

I asked him if he is married. He said he has a long-time girlfriend, but she has her own house. I said that's good. He laughed quite a bit at that observation.

Morris said Will's mechanical know-how will be essential to the job. But he has essential skills, too.

Before Alaska, Morris helped build airplanes at Boeing. When he got here, he worked on airframes for Reeve Aleutian Airways. Some of its planes were so old he had to machine parts to keep them flying.

In recent years, he made his living as an artist. Painting pictures of airplanes.

His photo-sharp images of military aircraft in Alaska settings sell to the National Guard and Air Force. He gets the details right, even dating air base buildings in the background to match the years of the planes.

"If you zoom in on some of his stuff, you can see where some of the paint is worn off where they close the door," Will said.

Morris said, "Every so often you'll get a crew chief who'll say, 'You're missing a couple of fastener heads around the cowling.'"

Morris has drawn plans to mount the 60-foot-long Flying Boxcar on the chassis of an International Harvester school bus, adding extra axles for stability and keeping the whole thing under 13 feet high to fit under the bridges on the way back to Alaska.

I say back to Alaska because it turned out they couldn't buy the plane they saw in Anchorage. Instead, Will found a gutted Flying Boxcar in Nevada that had been used as a firefighting water bomber.

They plan to take off the wings and truck the fuselage to Will's brother's place in California, put it on the bus there, and then drive it back to Anchorage.

In some states they'll need a pilot car, but in others they will be road-legal, parking the pilot car in the back of the plane to drive through.

Step one is getting the money, about $75,000 for the whole project.

Step two, gingerly cutting away the belly of the plane and lifting it onto the bus chassis. Carefully, Morris said, or the whole thing could fold up like a fortune cookie.

Step three, weld it together and attach the steering and other linkages. The bus they chose has its motor up front, which will fit neatly into an engine room below the cockpit that formerly was the wheel well.

Will thought the idea might run into trouble with the Department of Transportation, but he said the guys there got as excited about the project as he is.

The finished vehicle will look like a giant silver egg. No doubt people will want to check it out, and maybe buy a cup of coffee or a print when they do. But the two friends like best imagining a veteran sitting in the restored cockpit and traveling back in time to hear the airplane's deafening roar.

These guys have the same dream. They're matched, even though they met only a year ago, when Will hired Morris to drive the de-icing machine.

Which brings us back to how these things get started.

"We get paid whether we do anything or not, which is a little boring," Will said. "But we have lots of time to conjure up these crazy thoughts."

This column has been updated to correct the spelling of Sonya Senkowsky's name.