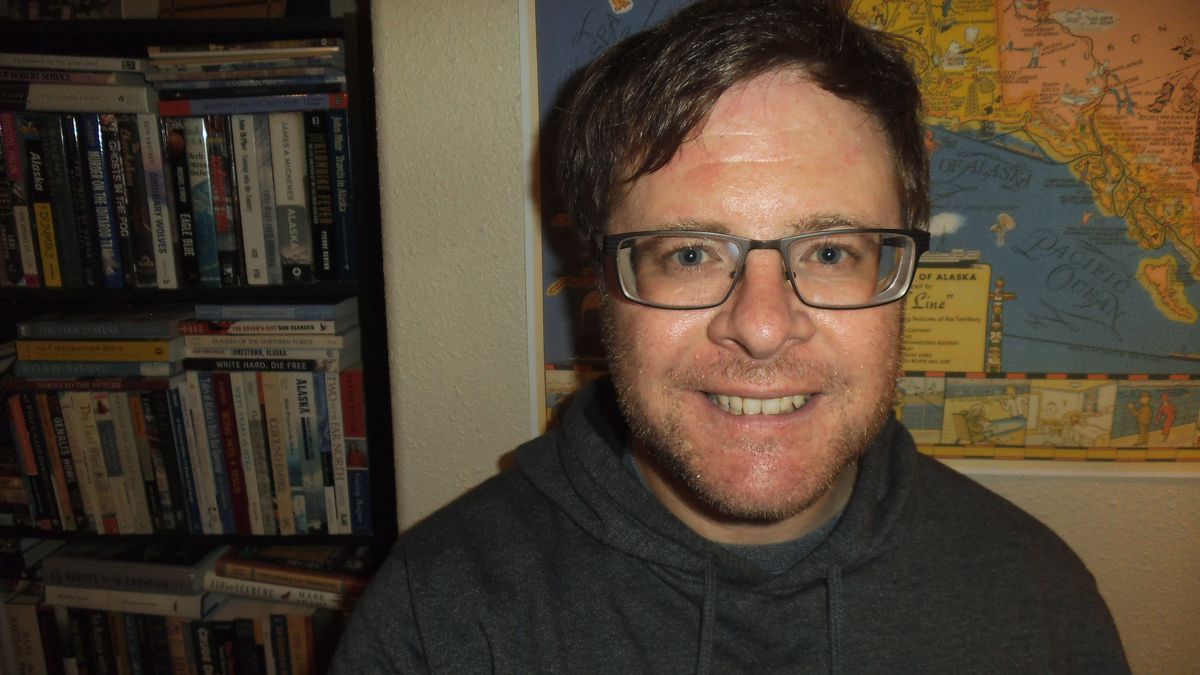 Songwriter Andrew Miller took this selfie at his home in Juneau. His music focuses on Alaska’s funny and odd details. (Courtesy of Andrew Miller)

Songwriter Andrew Miller took this selfie at his home in Juneau. His music focuses on Alaska’s funny and odd details. (Courtesy of Andrew Miller)

Andy Miller was looking for something that unifies all Alaskans for an album of 49 songs about the 49th state. He came up with a ballad about terminal N at the Seattle-Tacoma airport.

He's right. We don't have much in common, but almost every Alaskan reading this column knows SeaTac and would probably agree with Miller's criticism of the food in terminal N. Why is the food so much better in the main terminal?

Miller is a lawyer who does labor negotiations for the state of Alaska. Each spring when the Alaska Folk Festival takes over Juneau for a week, he performs a new set of funny songs. Occasionally, people ask for a recording, so he did an online album. You can find it at bandcamp.com.

I giggled through songs with titles like "The Last Bachelor in Petersburg" and "Back When Wasilla Was Cool" (which, the song says, was when "Walmart was still new") and, about his own town, "The Sensitive Men in Juneau."

None of this would be that funny if he didn't get it exactly right. "Spenard in the 70s," Miller sings, "was sort of like Springsteen's New Jersey / Crossed with Skagway in the 1890s."

In that song he explains: "You didn't need any real education to get a / Healthy paycheck but it got hard to spend it all in Alaska / And that's how we got Spenard."

Miller wasn't there. He wasn't even alive yet. He came to Alaska to work for the Sitka Sentinel newspaper in 2003, right out of college in Madison, Wisconsin. Writing parody songs had been his thing in high school.

But he has a powerful imagination, creating characters like the girl with a tattoo that says "Girdwood is a state of mind" but who now dreams of living in Eagle River, a personality change that has her boyfriend threatening to leave her.

And he created the three teachers from Dillingham on a weekend trip to Anchorage, crammed into a rental car with three empty suitcases, hoping to cut loose, fulfill "some physical needs," and return with stories for Monday morning, "Or at least save some money, on a Costco run."

Miller said there's really only one sincere song on the album, "Nome," which is about missing his own girlfriend, who is a high school teacher there, on the far side of the state. (He also wrote her a love song about a baby musk ox, but she didn't think it was a love song, so that doesn't count.)

Being apart so much is what gave him the time to write all these songs.

Or, I believe that's true. When we talked on Thursday, I couldn't tell when he was joking and when he was serious. Like his songs, with their sad-sack musical narrator, Miller is deadpan all the time. I laughed more when I read my notes from our conversation than when we were talking.

For example, when I asked about attaining the production quality of the recordings — with just his timid voice over a lone guitar or piano — Miller explained, "I moved around the house a little bit, and it didn't make much of a difference whether I was in one room or another."

His goal of writing 49 songs for the 49th state met a sad fate, something similar to what happens in his songs. He simply lost interest after writing 28 of them. The album is called "Alaska in 28 Songs." Even at that, he said, he doesn't expect anyone to sit down and actually listen to them all at once.

But to the 28 songs, he could also add the 15 songs from his previous album, which was about Juneau only. It is even more specific than the Alaska record.

The big opener on the Juneau album is a song about Rep. Justin Parish's beard. In that song, Miller expresses the wish that Gov. Bill Walker would grow a bushy beard, too. He said Walker was in the audience at the folk festival when he sang it last spring.

Rep. Sam Kito was also there, and had recently grown a beard, so Miller changed the lyric to be about his beard. He said Kito stood up and preened after the song was done, but Parish was disappointed.

How particular does he get? There's a song about Andrew Halcro, who served in the Legislature and ran for governor years ago and now runs the Anchorage Community Development Authority.

It starts like this: "If I was Andrew Halcro, I'd go by Andy / And let my hair grow over my ears / I'd still wear tailored blazers and argyle socks / And glasses instead of contact lenses / And if I was Dallas Seavey, I'd hardly care / About anything Andrew Halcro chose to wear."

Why is that funny? I don't know. Maybe it's not. But I couldn't help chuckling as pictures of Halcro and Seavey popped into my mind.

The songs capture something special about Alaska. It's so darned small. That's why these obscure references work. They take you to places and feelings better than any anthem about mountains or wildlife.

For most of us, being an Alaskan isn't about climbing mountains. It's about Miller's topics: dreaming of being MVP Gold 75K on Alaska Airlines, getting excited about seeing bands play that are long past their prime, and answering endless questions about Sarah Palin on trips Outside.

As Miller sings, everyone in Juneau wants to be governor because it's such a good job — you can cut in line at Fred Meyer — and, although half of Alaska's population hates the governor, that's still not very many people.

"There's a very, very, very small market for anyone who is going to be interested in this," Miller said.

But that's why it's so fun.