The stories of war and polar explorers, told by the things they carried 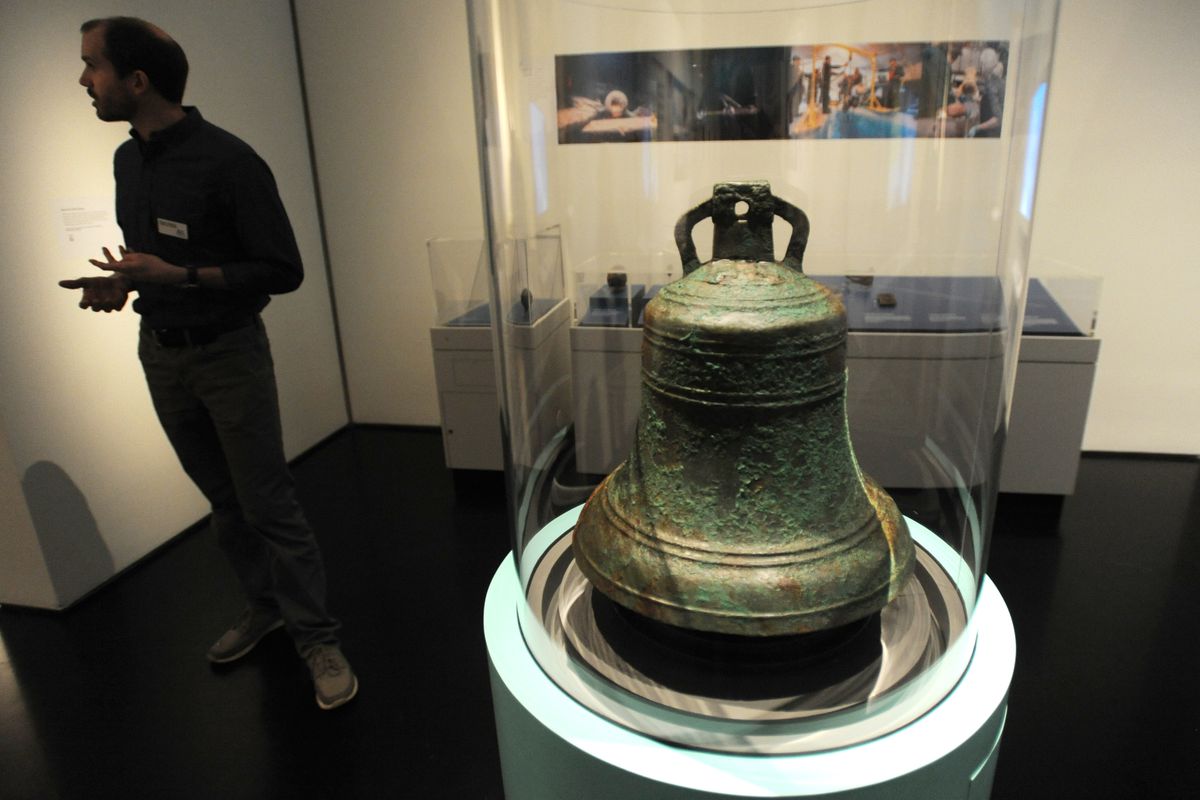 Ryan Kenny, associate director, exhibitions at the Anchorage Museum stands near the first artifact to be raised from the HMS Erebus was this bronze bell on display in the Death in the Ice: The Mystery of the Franklin Expedition exhibit on Thursday, June 6, 2019. (Bill Roth / ADN)

Ryan Kenny, associate director, exhibitions at the Anchorage Museum stands near the first artifact to be raised from the HMS Erebus was this bronze bell on display in the Death in the Ice: The Mystery of the Franklin Expedition exhibit on Thursday, June 6, 2019. (Bill Roth / ADN)

Tim O’Brien’s “The Things They Carried” is one of the best known pieces of fiction from the Vietnam War. Millions of copies of the 20-page story are in print, and it has been read by book lovers, veterans, patients in doctors’ waiting rooms, passengers on buses and, I would bet, prisoners in jail.

The mechanics of the story are uncomplicated. A 17-member American platoon is on patrol in bush Vietnam. One of the men is shot and killed after wandering off to pee. The young lieutenant in command blames himself. He and the platoon are changed forever.

The plot, while shocking, is not what makes the story memorable. Soldiers are shot in stories just as they are in real war zones. The things they carried into this fictional war zone, detailed like an inventory, are the building blocks of this tale, from the men’s government-issue uniforms, boots and rations, to their idiosyncratic good-luck charms, photos from back home and marijuana. Of their weapons, O’Brien says, “They carried all they could, and then some, including a silent awe for the terrible power of the things they carried.”

If their packs were full, so were their heads -- with fears, fantasies, daydreams, wonder.

I thought of “The Things They Carried” as I walked through the Anchorage Museum’s exhibit “Death in the Ice” (on display through September 29). This is the story of the Royal Navy’s Franklin Expedition of 1845 — two ships, the Terror and the Erebus, that disappeared in the Canadian Arctic while searching for the Northwest Passage. None of the 129 men survived.

The death of the men was established for certain by the mid-1850s with the assistance of Inuit villagers who had encountered sailors, weak and starving, after they abandoned their ships and were attempting to make their way over the ice to the Canadian mainland. The sunken Terror and Erebus (named for a Greek god of darkness and shadow) were located several years ago, remarkably well preserved under the cold water of the Arctic.

There has been a widespread belief since the 1850s that the men of the expedition who survived the longest became cannibals. This is now accepted as a certainty.

It is an oddity of history that the Franklin Expedition and the Donner Party of California, both of which shocked the Victorian conscience with cannibalism, were contemporaneous. Both were locked in ice and snow in the winter of 1846-1847.

A walk through “Death in the Ice” is in good measure an exhibit of the things the Franklin men carried, rescued from the ships, cairns and graves, with the aid of the Inuit. There are china plates, tools, pipes, buttons, small stoves, shotguns and one book -- a tiny copy of Oliver Goldsmith’s novel “The Vicar of Wakefield.” Also the ship’s bell from Erebus, which sailors must have rung hundreds of times.

The bell, as a museum artifact, will remain silent. But that is the nature of museum artifacts: They have a cultural or historical value but have lost their original purpose. Museum visitors look at them through glass, study them in a protected setting, engage their imagination in their presence. But nobody is going to read the expedition's copy of "The Vicar of Wakefield," not even the museum curator. It's no longer literature but an objectification of a tragedy.

Sir John Franklin was an experienced sailor, administrator and Arctic explorer. He had been to Alaska’s North Slope in 1826, leading a group of British sailors up the Mackenzie River in Canada. In fact, he named Prudhoe Bay -- after an English baron. He and his men represented the best the British navy had to offer. They were trained, scientifically inclined, curious, careful.

Yet they all died. By the end, probably 1848, these formerly disciplined officers and men had descended into madness.

The search for Franklin was as extensive as any mustered anywhere before 1860. An American, Elisha Kent Kane, captained a vessel and crew that cruised the Arctic looking for Franklin but came up empty. Like Franklin, Kane and his crew eventually were forced to abandon ship. Unlike Franklin, they made their way through the ice to safety, an American ship.

That ship’s surgeon, I.I. Hayes, noted in an official report that the men he treated were weak, frostbitten and sleepless for several days. “They were almost to a man delirious. Keeping (toward)... the vessel as if by instinct ...” Dr. Hayes went on to say that after the men were put to bed, “What had before assumed only the form of the simplest aberration now broke out in raving delirium, and for two days the ship presented the appearance of a mad house. ... Many of them seemed to think themselves out on the ice perishing with cold. ...”

The things they carried — Franklin’s men, like Kane’s, carried the seeds of derangement hidden in their kit.

There’s an old frontier saying my dad, Fabian, liked to quote. “The more a man carries in his head, the less he needs to carry on his back.” This is one of those perfect pearls of wisdom that has survived centuries because it is so obviously true, or so you think after hearing it the first time. Daniel Boone must have lived by it.

But a smooth pearl is not always adequate to the crises men and women actually face. Franklin needed more of everything to survive - more on his back, more in his head — and, critically, more in his imagination.

For these British sailors, the things they carried were not enough.