Why did the veto override fail? Because Alaska’s separation of powers is imbalanced. 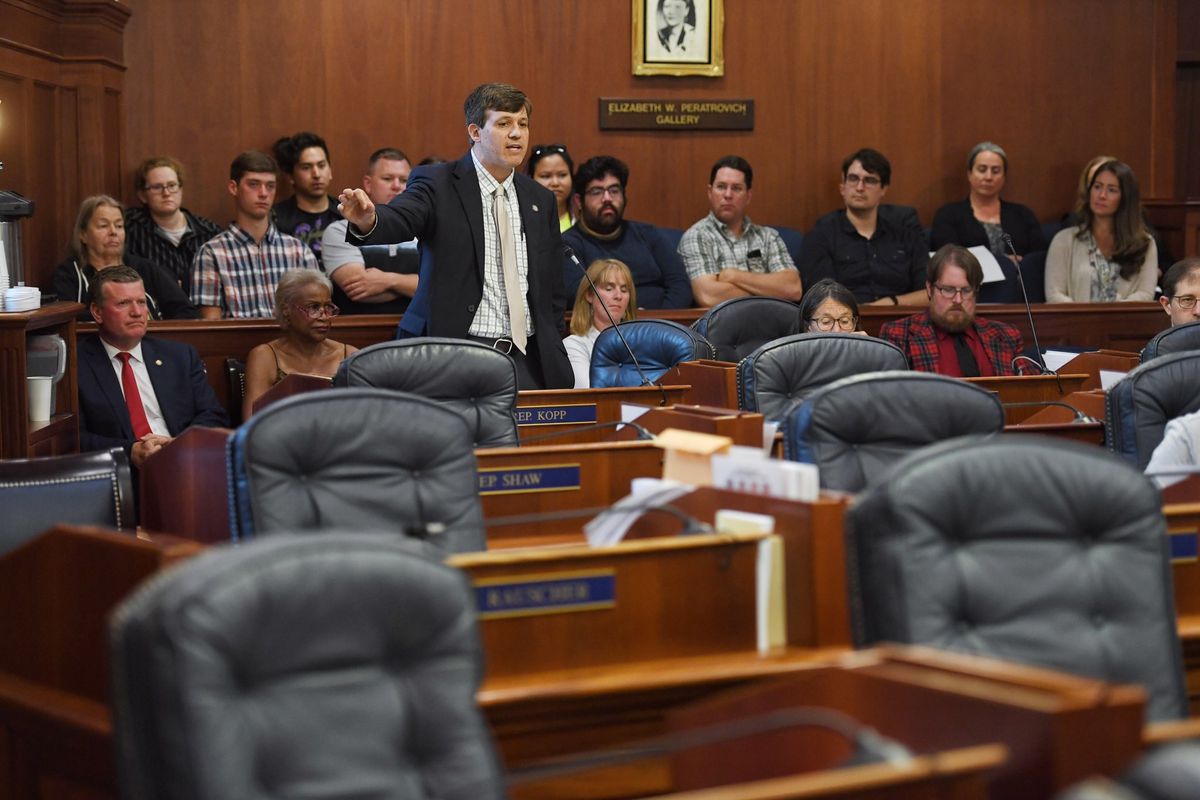 State Sen. Bill Wielechowski, an Anchorage Democrat, speaks in favor of lawmakers overriding Gov. Mike Dunleavy's budget vetoes Wednesday, July 10, 2019, Juneau, Alaska. Nearly a third of lawmakers were absent from the session at the Capitol, opting to meet in Wasilla instead, leaving only 38 members meeting in Juneau. It would take 45 votes to override the vetoes. (Michael Penn/Juneau Empire via AP)

State Sen. Bill Wielechowski, an Anchorage Democrat, speaks in favor of lawmakers overriding Gov. Mike Dunleavy's budget vetoes Wednesday, July 10, 2019, Juneau, Alaska. Nearly a third of lawmakers were absent from the session at the Capitol, opting to meet in Wasilla instead, leaving only 38 members meeting in Juneau. It would take 45 votes to override the vetoes. (Michael Penn/Juneau Empire via AP)

The override failed. The vetoes were sustained. I was not surprised.

I support overriding the vetoes. Most legislators do. (By my count, 38 or so of Alaska’s 60 legislators do.) But that doesn’t satisfy the three-quarters supermajority of legislators required by Article II, Section 16 of the Alaska Constitution.

That’s why the override failed: Getting 45 of the 60 legislators to override a gubernatorial veto is a bar about as tall as our governor.

Why does the Alaska Constitution set such a high, almost impossible-to-pass bar?

I’m morbidly intrigued by this question.

You might be further intrigued by the question, having considered the following three facts:

First, vetoes of “normal,” non-appropriation-related legislation, can be overridden with a more conventional two-thirds supermajority (40 of 60 legislators). Budget (and also revenue) vetoes — such as the governor’s $444 million in line-item vetoes — have a special, higher, three-quarters (45 of 60) “super-supermajority” hurdle.

Second, Alaska is the only one of the 50 United States to have a three-quarters appropriation line-item veto threshold. The only state!

Third, given that Alaska is the only state in the union with a nearly impossible three-quarters veto override threshold, you might not be shocked to know that the Legislature’s success in overriding vetoes is lower than my uninspiring Little League batting average.

The Legislature has considered overriding line-item vetoes 16 times since statehood. Only five of the attempts were successful.

Let me ask the question again: Why does the Alaska Constitution set such a high, almost impossible-to-pass veto-override threshold, when we’re the only state in the country with it, when our already-existing two-thirds override thresholds is more reasonable, and when the override threshold is proven by history to be reliably beyond the reach of the Legislature even on the points of broadest consensus?

The minutes of Alaska’s Constitutional Convention provide the answer. (Warning: it’s not that persuasive.)

George Sundborg, a delegate from Juneau (and as a newspaperman and chair of the Convention’s Committee on Style and Drafting, a primary reason why our constitution is a marvel of economy and measured clarity) thought the three-quarters threshold was a problem:

Steve McCutcheon of Anchorage countered: “You cannot exercise a strong executive arm unless you have a strong control on the purse strings.” Touché.

Sundborg’s motion to create a uniform two-thirds veto threshold failed by voice vote. (If you’re curious as I was, I asked Vic Fischer, the only surviving delegate from the constitutional convention, how he voted. He can’t recall this particular vote, one of hundreds the delegates considered.)

And what we have is exactly what McCutcheon envisioned: a governor with strong, almost unilateral control of Alaska’s purse strings. And we have exactly what Sundborg feared: a veto override threshold where a minority, 25% of legislators, have the power to reshape Alaska against majority will (per a July 3 poll, the governor’s approval rating is 31% and his disapproval rating is 64%).

In sum, the governor is a really powerful office. Since statehood, we’ve had governors, regardless of party or ideology, who have operated within relative bounds of normalcy, and have not exercised these constitutional powers to full, unrestrained, destructive effect.

That changed in 2018. As the Bill Walker and Mark Begich campaigns waged internecine battle for the middle and left of the Alaska electorate from July through October, Mike Dunleavy waltzed and pirouetted all the way until the final 18 days of the campaign without any meaningful public vetting — a gift of a campaign cycle.

The day Dunleavy won was the day the powers our constitution vests in the executive were going to be used to their full and maximum effect, in a way Alaskans have not seen, ever, since the constitution was written.

We got our first taste of the new executive-branch normal on February 13, when the governor released his draft proposal.

Everyone in and out of the Legislature knew we were going to rewrite a new, much less radical, more reasonable budget. We did.

Under this governor, however, the Legislature’s budget process was a Titanic-deckchairs exercise. The next three budget cycles will be even worse. Brace yourself, Alaskans.

Nearly three months ago, on April 15, fearing the day the line-item vetoes would ultimately come, I quietly introduced House Joint Resolution 15 (HJR 15), “Proposing an amendment to the Constitution of the State of Alaska relating to actions upon veto.”

As yesterday’s failed override shows, and with historically unprecedented gubernatorial behavior our founders did not contemplate, the constitutionally granted separation of powers between legislative and executive must be beneficially rebalanced.

Oh, and if you’re curious, I asked Vic Fischer what he thinks about HJR 15. He said he supports it.

I hope the Legislature and Alaskans will as well.