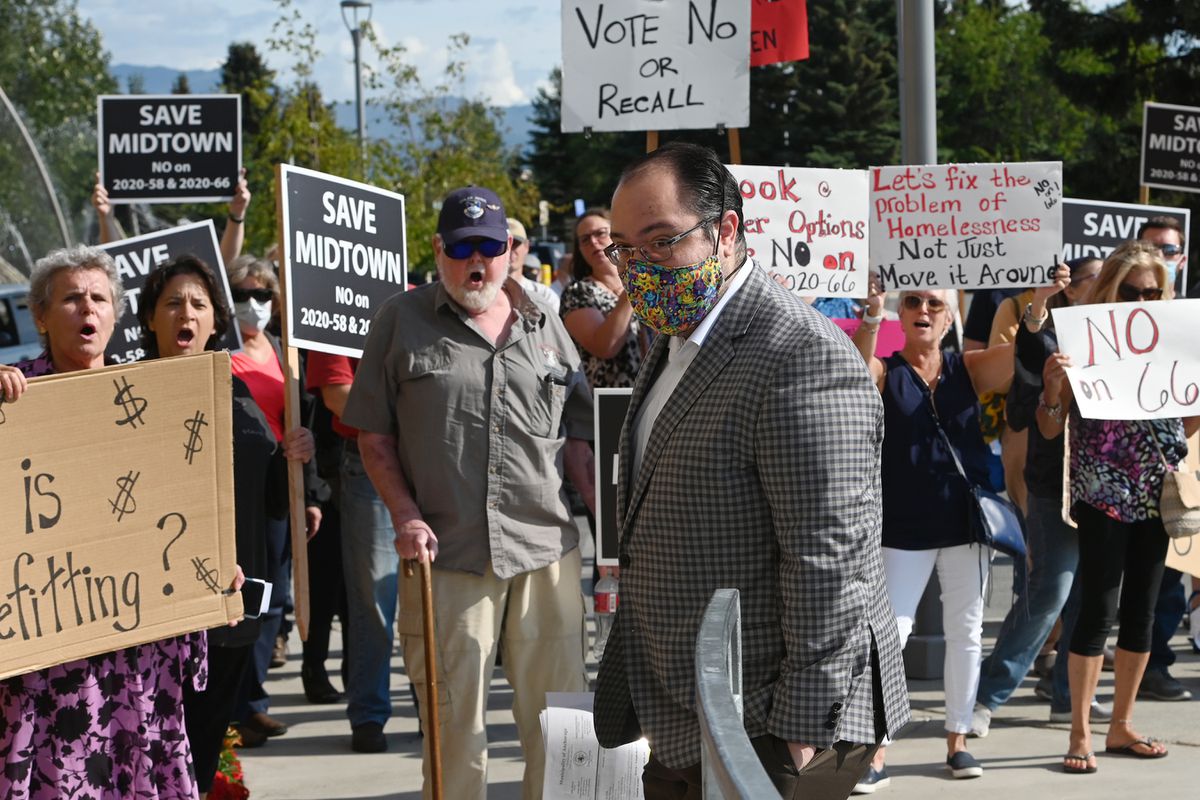 Anchorage Assembly chair Felix Rivera walks past protesters chanting "Vote No" as he arrives for a meeting on Monday, July 27, 2020, on the city purchasing four buildings for homeless services. (Bill Roth / ADN)

Anchorage Assembly chair Felix Rivera walks past protesters chanting "Vote No" as he arrives for a meeting on Monday, July 27, 2020, on the city purchasing four buildings for homeless services. (Bill Roth / ADN)

As someone who has desperately wanted to help people struggling with homelessness, I admit I am sometimes afraid to go down Third Avenue. It’s OK, you can admit it too. I’ve seen so many fights, screaming and tears walking back and forth from Bean’s Café and Brother Francis Shelter. I’ve heard terrible stories of abuse from people seeking emergency shelter. I’ve seen the bedbug bites, the broken bottles, discarded needles and feelings of betrayal on other’s faces.

Yet I myself have only been threatened with murder once. I was walking in Bayshore, a neighborhood in nearly opposite conditions as downtown. The only bottles were soft drinks and beer being consumed by happy families out on their lawns. By all typical standards, I was in a “good neighborhood.” Apparently I walked down the wrong avenue, and as I doubled back, a white woman said she would shoot me if she ever saw me on her street again. Apparently I did not “look the part” of someone supposed to be in her neighborhood. Today, I would prefer to visit the homeless shelters rather than go take a walk alone around Victor Road and 100th Avenue.

I can’t help but think of her face when I see the reaction to the ordinances AO 2020-58 and AO 2020-66. Voices from multiple Midtown neighborhoods are concerned about what is happening in their region of the city. They fear that their living conditions will be negatively affected by having people in recovery so close; that 36th Avenue will look like Third.

I get it. You don’t want the needles in your parks, the shooters on your lawns, or people lost in the throes of abuse and mental illness wandering by your house. You’re worried about how far away from the boulevard your kids can go. And you’re angry that if you don’t support the ordinances, you’ll get called a racist or classist or some related internet jargon. No judgment from me; my only hope is that because I’m trying to reach out to you, perhaps you will consider my perspective as well.

You might be surprised to hear some of the stories of those living on the street. People come from all sorts of backgrounds, from poor and rich households alike. Sometimes people end up on the street because they got dealt a bad hand. Others made choices they thought had to be made, like an acquaintance of mine who ended up houseless after using meth to keep working four different jobs. You might consider how many of them are trying to keep sober, to find housing, and to get back some control over their lives. Some might even tell you how much they also don’t like going downtown, how they’re tired of threats and harassment from violent people in the area.

The fear in our minds is the fear that our conditions will become like those on the street. We can see the excesses of abuse, addiction and debt on those panhandling or drinking on the side of the road. We fear what we don’t see directly but we know is out there. And seeing people stuck in affliction outside our doors reminds not only of what is going wrong in this city, but also of what could potentially happen to our neighbors, our friends or our families. It was the same fear in the eyes of the woman who threatened to shoot me in Bayshore; I was not homeless or struggling with drug use, but she felt an encroachment on her home nonetheless. The negative conditions are heavy upon our eyes. We can’t run away or hide when it’s happening in our neighborhoods.

Once we have recognized our concern, we are left with two options. We can tolerate the problem or we can do something about it. We can end homelessness or we can let it grow. The reality of the situation is that there are no other choices, and we cannot have both congruously. If we do nothing and allow poverty to suck more people down, there will be more tent cities, more people living in danger on the streets and more resulting social problems. If we are to do something to help, there will need to be funds, shelters, medical help and community responsibility allocated for the task.

There will be those who simply blame poor choices for homelessness. Choice is one factor in determining the direction of our lives, without a doubt. It is not the only one. We know this because simply “wanting” to get better is hardly possible without a home, employment, medical services or community support. Whatever we may believe philosophically, policy makers do not have the option of waiting until people find the right state of mind to solve the problems in Anchorage.

Many residents want to have it both ways. They turn down options to help people living in homelessness, and then feel enraged when there are more people in need of assistance. Living responsibly means accepting the consequences of your choices. One year ago, Anchorage residents were demanding an end to tent cities and illegal encampments. And yet now that the Assembly is on the verge of providing a real-world solution to those problems, we are saying “no, not like that.” We now seem to be opting for tent cities again.

Some in the argument insist that we need to provide A before B, that mental health must come before housing. Aside from the logistical problem of trying to treat people living in the woods, I imagine that allocated mental health funds would run into a similar problem. When we are talking about psychiatric care in the budget allotments next year, we will likely hear naysayers insisting we need to spend more on law enforcement instead. There never seems to be room in the budget when it involves the needs of the homeless.

I ask you: What should we be doing instead? We won’t build shelters, we won’t fund mental health, we won’t provide affordable housing and we won’t allow the homeless to camp anywhere. Real human beings are outside right now, dealing with enough life-threatening problems without being shuffled around like cargo. If we are to do something else besides purchasing housing and treatment centers, then let’s put our money where our mouths are. Don’t offer your opposition without giving serious consideration to the existing options.

We are living in two cities, Anchorage. You could probably draw a physical line to demarcate the boundaries. The dissonance is threatening to erode any sense of identity, any sense of pride we have in our communities. Now that the lines are changing, there is public recognition of the division. Don’t look away! See how your neighbors are struggling. If you are concerned, you are starting to recognize the seriousness of the situation.

Ryan Francis is a writer and cook living in Anchorage. His sister, who was struggling with homelessness, was murdered in 2016.