We lost my father, Ted Stevens, a decade ago. Let’s remember his lessons. 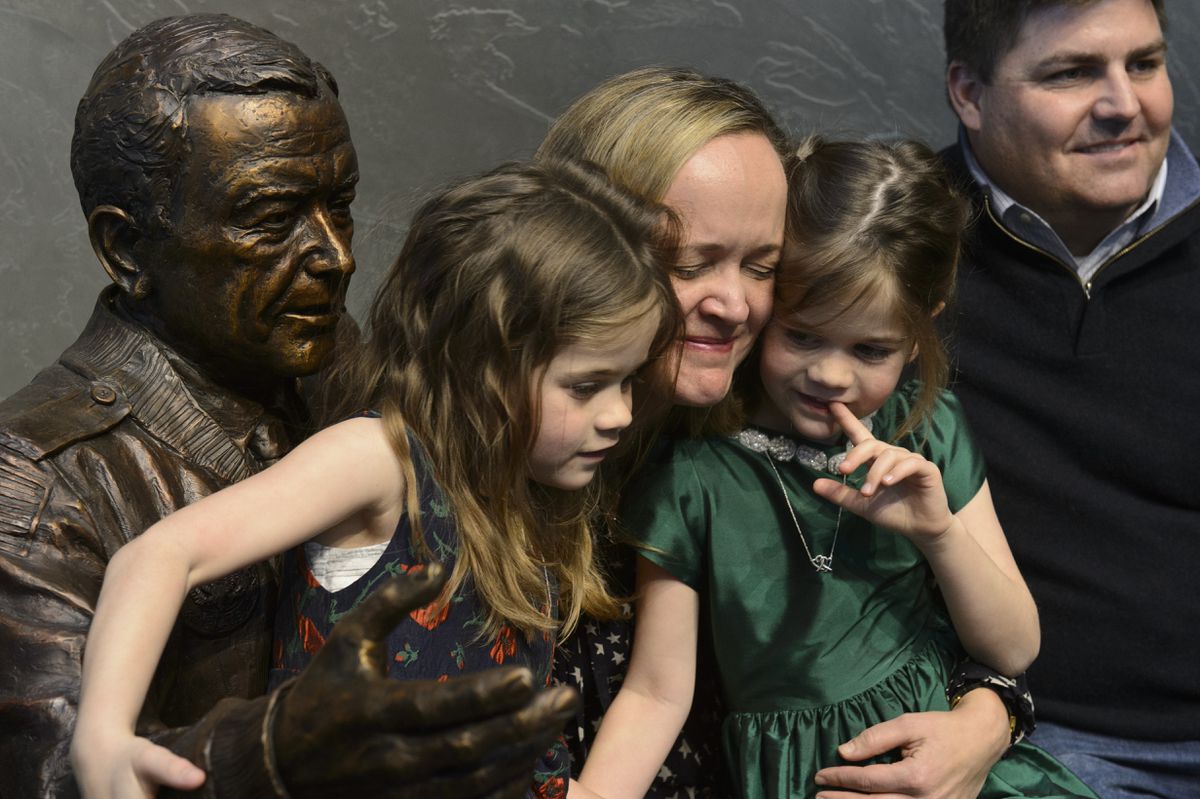 Lily Stevens Becker hugs her 5-year-old twin daughters Megan and Chelsea as they sit with the statue of Stevens Becker's father, Ted Stevens. A bronze statue of Ted Stevens was unveiled during a ceremony at Ted Stevens Anchorage International Airport on February 23, 2019. Stevens, who died in 2010, served in the U.S. Senate for 40 years. (Marc Lester / ADN)

Lily Stevens Becker hugs her 5-year-old twin daughters Megan and Chelsea as they sit with the statue of Stevens Becker's father, Ted Stevens. A bronze statue of Ted Stevens was unveiled during a ceremony at Ted Stevens Anchorage International Airport on February 23, 2019. Stevens, who died in 2010, served in the U.S. Senate for 40 years. (Marc Lester / ADN)

Ten years ago on Aug. 9, the world lost five remarkable people when a single-engine de Havilland DHC-3 Otter went down near Aleknagik: Dana Tindall, Corey Tindall, Terry Smith, Bill Phillips and my father, Ted Stevens. My experience from that day into the blurry ones that followed is one that too many Alaskans have had. The joy that four people survived. The shock, and later, the overwhelming grief.

I was not alone in my grief. In the months that followed, many people would break down sobbing when they saw me, probably because there’s no mistaking who I resemble. I wish now I could remember all of the stories that poured out of people after giving me a hug. As time went on, most of the tears faded, but I would still hear “I wish he were here” or “I wonder what he would think about this” from his friends, former colleagues and former staff. I often hear those questions to this day.

As for me, I wonder how he would help us navigate these unpredictable and frequently scary times. I think about the resilience that came to him so naturally, well before most of us learned it was something valuable to cultivate. He moved from Indiana to California as a young boy after his parents’ divorce in the early 1930s. Strengthened his eyesight after failing a vision exam to become an Army Air Forces pilot. Fought in World War II and came home in December 1945 to complete college and law school on the GI bill. Survived a 1978 plane crash and went on to fly as a pilot and a passenger with no hesitation. Raised six children. Served for 40 years in the U.S. Senate, accomplishing remarkable legislative achievements while in the minority. When I find the “new normal” to be overwhelming — keeping up with a career in the law, administering virtual schooling for my twins, cooking, cleaning, and staying positive in the midst of so much negative news — I think of his resilience, take a breath and keep going.

I have tried to tell myself that Aug. 9 is just another day, but every year at this time, I inevitably reflect on those days after the crash. They are painful memories. But 10 years on, I can hold on to the things I gained after the tragedy. New brothers in the sons of Bill Phillips. The friendships with those who dropped everything to help ease the burden of the post-crash load, or to just be there. Gratitude that I had a loving father who still inspires me daily.

This year, I also reflect on the things I saw Dad do in his life and take them as lessons. Reward true friendship with unyielding loyalty. Commit to a quest of lifelong learning. Listen to people with big ideas and see what you can do to help them. Be respectful of people from all walks of life. Fight for equal treatment. Send handwritten notes to friends and people who have touched your life. Have faith, and be comfortable that others may have a different one. Make friendships with people who do not share your political ideals. Relax and recharge with a book, a movie, a walk, music. Take the stairs, not the escalator. Eat healthy food, especially wild Alaska salmon. Sneak in some dark chocolate or some ice cream every once in a while.

In his farewell address to the U.S. Senate, he ended with: “My fate is in God’s hands. Alaska’s future is in your hands.” He left us with a reminder that while none of us can predict our future, we can all be part of the future of Alaska. In this time of unprecedented crisis, his memory reminds me that by listening, working hard, looking past differences and mustering the courage to think big thoughts, we will emerge stronger. Consider his lessons and let’s forge ahead.

Lily Becker is an attorney and also serves on the Board of Directors of the Ted Stevens Foundation. She is the daughter of the late Sen. Ted Stevens.

Lily Stevens Becker is the daughter of the late U.S. Sen. Ted Stevens.