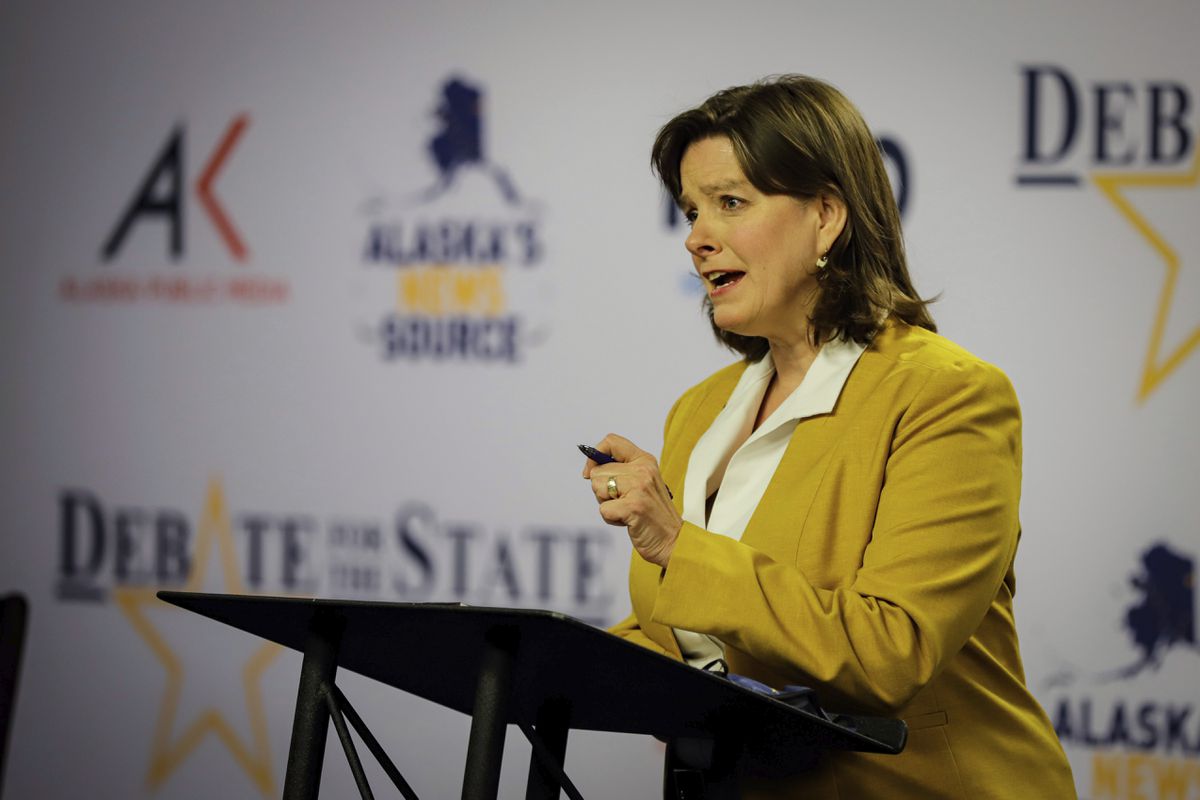 Alyse Galvin, an independent running for U.S. House from Alaska, appears during a debate Thursday, Oct. 22, 2020, in Anchorage, Alaska. She is facing incumbent U.S. Rep. Don Young, a Republican, in the general election. (Jeff Chen/Alaska Public Media via AP, Pool)

Alyse Galvin, an independent running for U.S. House from Alaska, appears during a debate Thursday, Oct. 22, 2020, in Anchorage, Alaska. She is facing incumbent U.S. Rep. Don Young, a Republican, in the general election. (Jeff Chen/Alaska Public Media via AP, Pool)

I have been a member of the International Brotherhood of Electrical Workers (IBEW) for 23 years, beginning as an apprentice and now serving as the Business Manager. Our labor union includes skilled workers in telecommunications, power generation, electricians, linemen, hospital workers, tree trimmers, technicians and more. My job now is to make sure all 4,300 workers are protected, which includes ensuring we have a Representative fighting for us in Congress. IBEW believes that Independent Alyse Galvin is that fighter.

Alyse Galvin will improve the lives of Alaskan working families. She is a strong supporter of organized labor, and, unlike our current representative who has been a politician for 47 years, she knows what it’s like to be a worker in Alaska. She has worked on a slime line, ran two small businesses, and gotten real results through her education advocacy. This is an Alaskan who knows our economy like the back of her hand. Her core policy plans include investing in infrastructure and vocational training to make sure that jobs exist and that Alaskans are prepared for these projects.

This could not be more different than Don Young, who has spent decades lessening protections and opportunities for Alaska’s workers. He has consistently voted against laws that would set fairer pay and working standards for workers, including the Paycheck Fairness Act. After corruption scandals cost him all his committee chairmanships, Don Young fumbled $1 billion intended for building Alaska’s infrastructure, which should have supported countless job opportunities. He recently voted against the HEROES Act, which provides economic assistance to governments at the state, local and tribal levels, the expansion of unemployment insurance, a 25% increase in aid to disabled veterans, and additional funding for individuals, small businesses and employee retention.

Too many workers and friends have been forced to leave Alaska because projects Don Young promised for decades never materialized. Don Young is no longer effective for Alaska and our workers. He’s an obstacle.

Stand with Alaskan workers and vote for Alyse Galvin Nov. 3.

Dave Reeves is the business manager for IBEW Local No. 1547. He lives in Wasilla.