For Anchorage mayor, is this the best we can do? 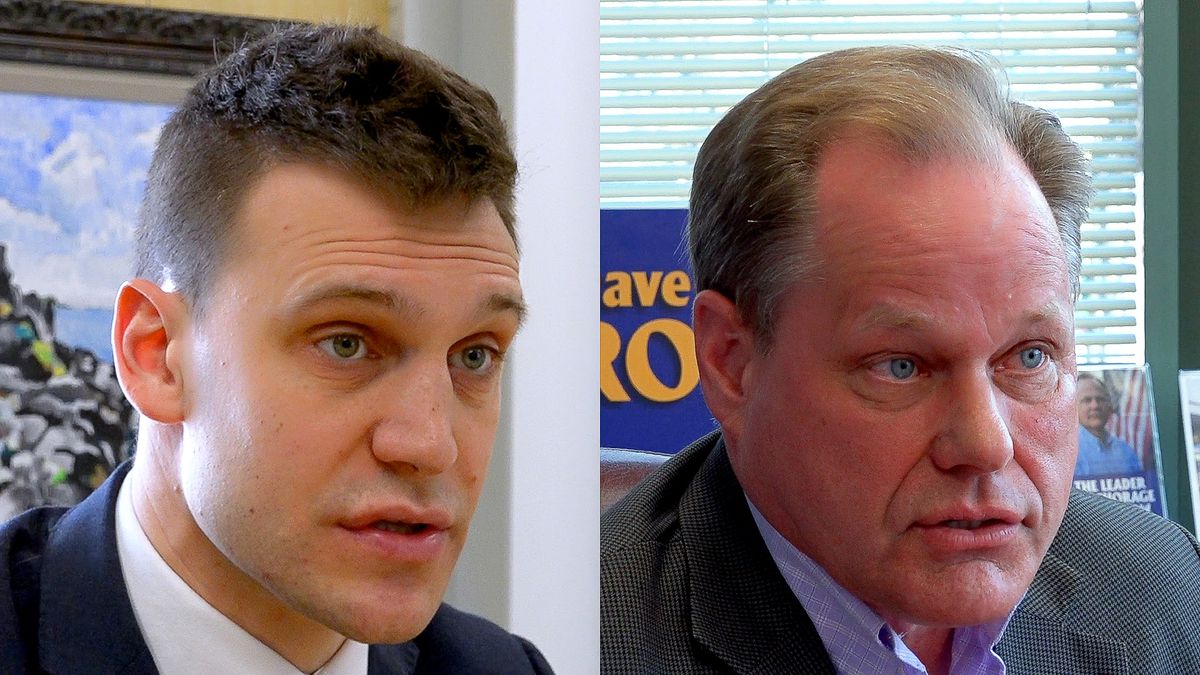 With Anchorage’s mayoral runoff election finishing up Tuesday, it is impossible not to note H.L. Mencken’s sage observation that “Under democracy one party always devotes its chief energies to trying to prove that the other party is unfit to rule — and both commonly succeed, and are right.”

One need only look at Anchorage to see his point.

The contest for the city’s top executive post — with all the snap, pop and sizzle of a sewing bee — pits 36-year-old East Anchorage Assemblyman Forrest Dunbar against 62-year-old retired commercial pilot Dave Bronson.

Dunbar, a corporate attorney and Alaska Army National Guard captain, is a member of our Assembly’s uber-liberal contingent and a failed Democratic congressional hopeful. He says he has a plan for this fair burg: Spend, spend and spend some more. He cannot say it in those words, of course. He would rather enhance, prioritize and diversify.

Bronson also says he has a plan: Cut, cut and cut some more. No real specifics, but, hey, he would not cut police. And he wants to get Anchorage’s economy up and running by lifting the economy-busting COVID-19 emergency restrictions Dunbar embraced until he didn’t.

Neither appears to like the other much. They spend a lot of time and money using each other for punching bags. Bronson is a fringe whacko hooked up with the Anchorage Baptist Temple and the Save Anchorage movement, Dunbar says. The Assembly is a “bunch of idiots” and Dunbar does not have “the sense God gave an anvil,” Bronson claims.

Some of us are left to wonder: How is it this pair is the best we could do? In a city of some 300,000 souls? Really? To some, they are not, and never were, the best of the crowded field that months ago started to run for the job.

Former Assemblyman Bill Evans, with experience and political savvy, and former City Manager Bill Falsey, a technocrat of sorts who acquitted himself admirably after the 7.1 magnitude earthquake in 2018, would have been a doozy matchup offering depth and real policy choices. Not everybody agreed, apparently.

Bronson’s problem — or gift — is that he has no real political record, no bona fides, no bones to pick through. What he has is a seemingly almost cavalier attitude about COVID-19 — says he had it in November — and a lack of specificity. He remains largely a question mark. He is a founder and former president of the Alaska Family Council, a nonprofit focused on conservative Christian values, and says he is a conservative. It is not much to go on.

Dunbar’s cross to bear is that he does have a record.

There are his snarky emails with his pal, Assemblyman Christopher Constant, and the strong-arming of church leaders to support former Mayor Ethan Berkowitz’ plan to spend millions buying buildings in Anchorage for drug treatment and homeless shelters. Then, there is the city’s Coronavirus Aid, Relief, and Economic Security Act funding mismanagement and Dunbar’s immediate and vociferous defense of Berkowitz after he was caught, well, with his pants down. Dunbar called the accusations against Berkowitz “wild and unsubstantiated” — just before Berkowitz resigned. (Despite that, the Alaska Women’s March supports Dunbar. Go figure.)

Then, there is this:

Dunbar repeatedly backed the mayors’ hard, business-crushing restrictions in Anchorage beginning in March 2020 because of the COVID-19 virus, even agreeing with Assembly-selected Acting Mayor Austin Quinn-Davidson that a 70% vaccination rate should be reached before lockdowns could be eased.

Despite public opposition, Dunbar even joined with five other Assembly members April 12 to vote for the eighth consecutive lockdown extension. Then, only days later, on April 27, a switcheroo. Dunbar co-sponsored an ordinance he and his helpful Assembly chums passed that lifted the restrictions at midnight May 3, ta-da, just before the election — while the vaccination rate still hovered at about half the 70% target.

That it was a blatant attempt by our liberal-leaning Assembly in the waning days of the mayoral contest to boost Dunbar’s runoff chances appears inarguable.

The question we now should be asking: Would Dunbar and Co. reinstate the restrictions if he wins the election? Remember, six members voted to retain them as recently as April 12.

The Assembly’s actions for the past year changed Anchorage, perhaps forever. Businesses suffered immensely in the months since Berkowitz locked down this city. Some shuttered forever. People lost jobs, lost their homes. Lives have been changed. Let’s be clear, some of the measures were necessary — up to a point. In recent weeks and months, Dunbar could have worked to undo the mess, lessen the burden, but he did not — until it was advantageous.

This pair, Dunbar and Bronson, prove Mencken’s point, and some of us keep coming back to this:

How is it these guys are the best we could do?

Paul Jenkins is editor of the AnchorageDailyPlanet, a division of Porcaro Communications.