Comey continues to display his lack of credibility 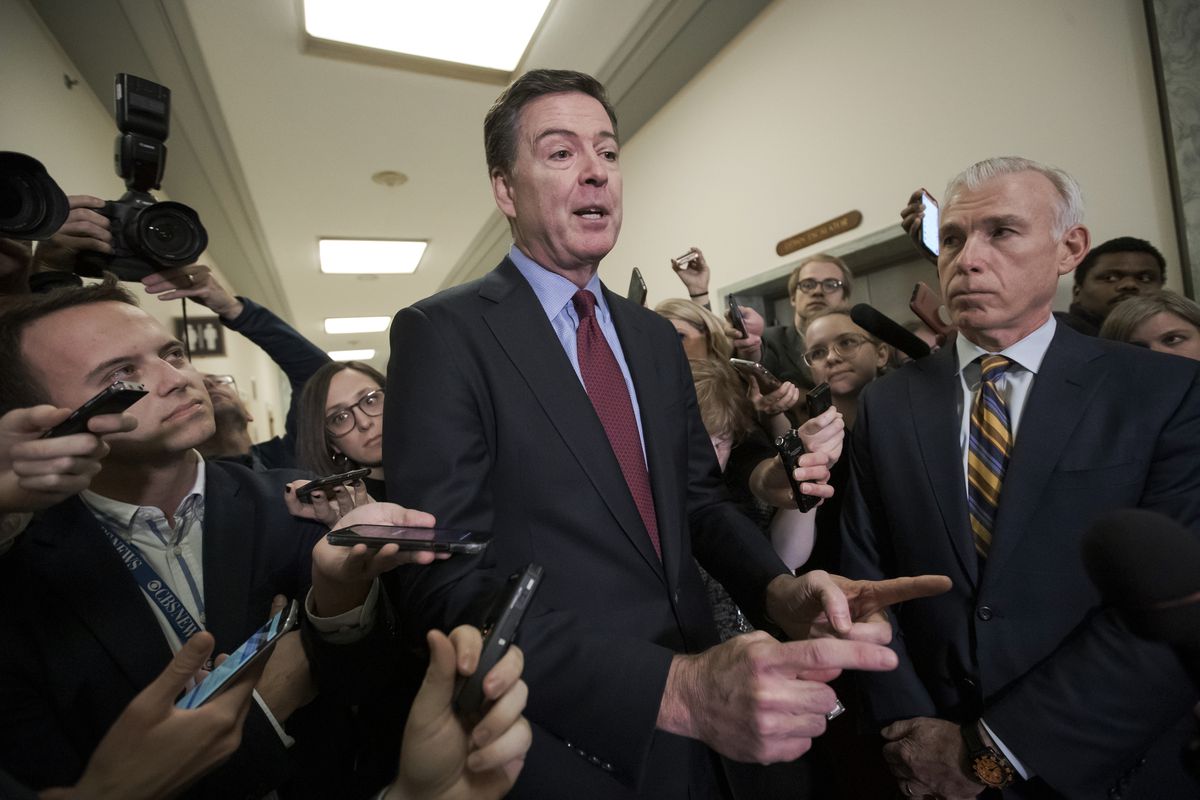 Fired former FBI Director James Comey is at it again.

Last week, Comey testified before members of the House Judiciary Committee and the House Oversight and Government Reform Committee. In a single appearance, Comey, on 245 separate occasions, while under oath, stonewalled questions with "I don't know," "I don't remember" or "I don't recall," according to a congressional interrogator, Rep. Jim Jordan. (R-Ohio).

If any private citizen tried Comey's gambit with federal IRS auditors or FBI investigators, he would likely be indicted for perjury or obstruction.

Why did Comey, the nation's former top-ranking federal investigator, avoid telling "the whole truth and nothing but the truth" while under oath?

The answer is, unfortunately, obvious. Comey has been called to testify before members of Congress on numerous occasions. He has written a long book and gone on an extensive book tour, and his paper trail is long.

He tweets almost daily and is often on television -- and in those venues never seems to admit to any memory lapse. And Comey has been at the center of every major scandal involving the 2016 election.

In other words, Comey is realizing that almost anything he might say will likely be at odds with something he has said, done or written prior -- and could potentially subject him to perjury charges.

So, Comey dodges and hedges.

Oddly, Comey has long posed as a modern-day Jeremiah. He thunders almost daily about the moral lapses of his perceived antagonists -- mostly Donald Trump, the Trump administration and the Republican Party that Comey left.

Comey has tweeted under the pseudonym "Reinhold Niebuhr" -- the celebrated 20th-century German-American theologian and ethicist. Comey apparently wishes to remind us of their similar moral insight.

Comey's memoir is grandly entitled "A Higher Loyalty: Truth, Lies, and Leadership." He writes to remind readers of his sterling character, which has always guided his career. Most recently, the self-righteous Comey said that the interim attorney general, Matthew Whitaker, is not very bright.

What is odd about the professed ethics of the sanctimonious Comey is that his assertions are belied by his own often-unethical conduct.

The Justice Department's inspector general criticized Comey in a report for acting unprofessionally in his investigation of Hillary Clinton's illicit private email server, improperly assuming the role of both investigator and prosecutor. Comey concluded, then opened, and then again concluded the Clinton email case at public press conferences in the midst of a presidential campaign. He drafted an exoneration of Clinton before he had even interviewed her or her top aides.

Comey's testimony about FBI leaks to the press is at odds with his sworn statements from his former deputy, Andrew McCabe.

Comey met with President Trump on several occasions and ensured him that he was not the subject of an FBI investigation -- amid mysterious leaks to the press that Trump was, in fact, part of the probe.

Speaking of leaks, Comey made sure that his memos about his meetings with President Trump were leaked to the press.

Comey said his bizarre behavior was designed to force the appointment of a special counsel, which resulted in the selection of Robert Mueller, a former FBI director and a longtime Comey acquaintance.

A number of high-ranking FBI officials during Comey's tenure have either been fired, forced to resign, retired or were reassigned -- in some cases resulting from accusations of improper conduct or bias.

McCabe was assigned by Comey to oversee the Clinton email scandal even though just months earlier, McCabe's wife had run for a seat in the Virginia state senate with the help of nearly $500,000 in campaign contributions from a political action committee associated with the Clintons.

Comey's FBI is largely responsible for the prominence -- and the leaking -- of the notorious dossier compiled by Christopher Steele. Yet Comey did not reveal to the Foreign Intelligence Surveillance Court that requests for warrants to conduct surveillance on a member of the Trump administration were based on an unverified dossier. The court was never informed that the dossier was funded in part by the Hillary Clinton campaign. Nor was the court informed that Steele, a British citizen, had been dropped as an FBI source for leaking to the press. Comey also misled the court by presenting news stories as proof of alleged Trump-Russian collusion, even though those stories were based on the contents of the unverified Steele dossier.

There has been no explanation from Comey about why, when, where and how the FBI used an informant in hopes of gaining damaging information against Trump.

Comey's sanctimoniousness and misdeeds pose lots of questions. Is Comey a mere hypocrite? Or in guilt does he project his sins onto others? Or does he by design pose as a moralist to help insulate himself from future legal jeopardy?

Or all of the above?

Victor Davis Hanson is a classicist and historian at the Hoover Institution, Stanford University, and the author of "The Second World Wars: How the First Global Conflict Was Fought and Won." You can reach him by e-mailing authorvdh@gmail.com.