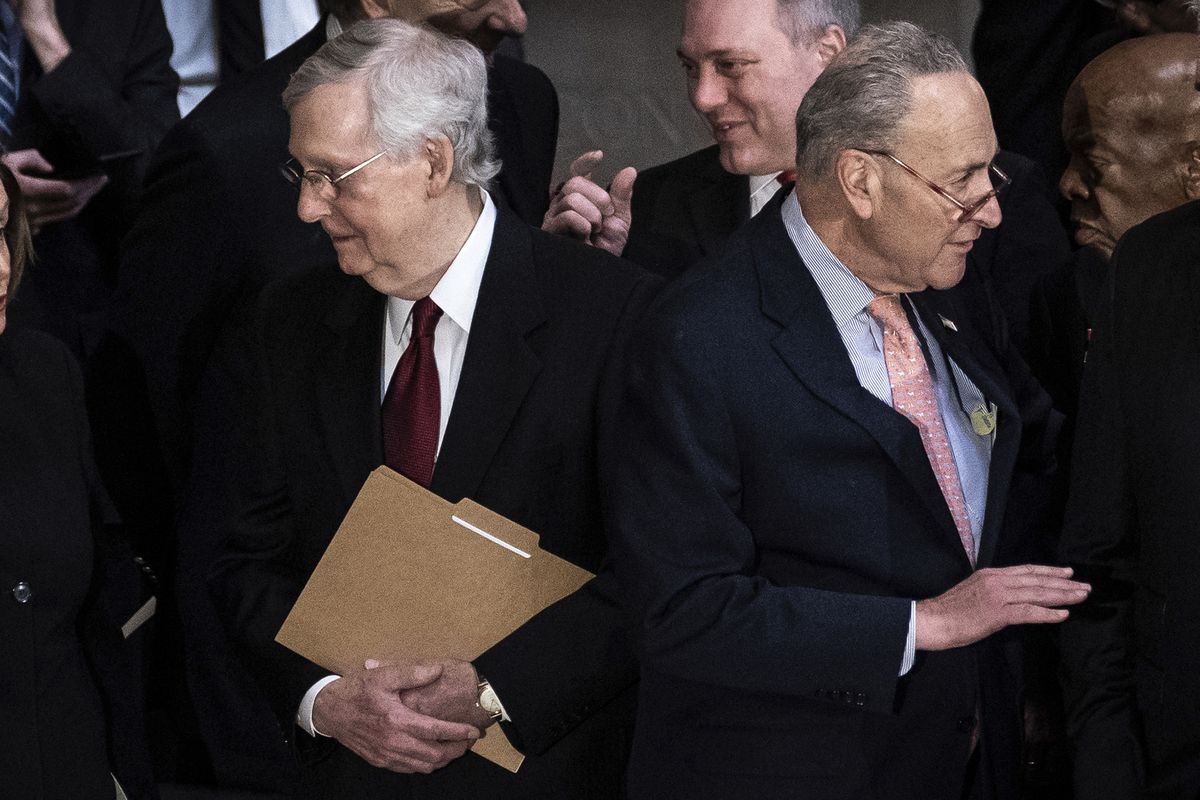 Mann is a senior fellow at the Brookings Institution, and Ornstein is a resident scholar at the American Enterprise Institute.

It is common for Americans to rue the absence of bipartisanship. Even expressly partisan figures like Senate Majority Leader Mitch McConnell, R-Ky., and President Donald Trump have called for more cross-party collaboration. Former vice president Joe Biden has said that “no party should have too much power.” And there is even a prestigious think tank, the Bipartisan Policy Center, dedicated to the idea. The calls may be nothing new, but they have increased in intensity and volume as our times have become hyper-polarized, rendering bipartisanship mythical in many respects.

Myth No. 1: Bipartisanship was the norm through most of U.S. history.

NPR lamented that Republican Sen. John McCain's death in 2018 symbolized "the near-extinction of lawmakers who believe in seeking bipartisanship to tackle big problems." A bipartisan pundit duo wrote in The Hill before the last election that bipartisanship had a "strong record of success," citing President Bill Clinton collaborating with Republicans and President Ronald Reagan working with Democratic House Speaker Tip O'Neill.

But our history is littered with times when partisan rancor was literally deadly. As historian Joanne Freeman’s “The Field of Blood” points out, disputes between the parties included plenty of violence in Congress in the decades before the Civil War. In 1902, a fistfight broke out on the Senate floor when Democratic Sen. Benjamin Tillman was angered that fellow Democrat John McLaurin was even considering siding with Republicans. Physical altercations between the parties abated in the 20th century, at least, but partisan conflict has remained the norm. The period from the 1930s into the 1970s, when a “conservative coalition” of Republicans and Southern Democrats worked together to form majorities, is the exception. And that bipartisanship was achieved at the cost of preserving and protecting Jim Crow.

Myth No. 2: The partisan divide is driven by policy.

In their platforms, the parties have stark differences in outlook and policy. Journalist Jonathan Salant says they are "180 degrees apart." The Pew Research Center concludes that Democrats and Republicans are growing ever more divided on fundamental priorities.

But more than specific policies, strong tribal identities and intense competition for control of government drive our partisan polarization. One psychology study found, for instance, that public views on climate change polarize when Democrats and Republicans are told that the policies they are asked to evaluate were supported or opposed by the other party. The Affordable Care Act was designed to appeal to Republicans by adopting key elements from the GOP alternative to the 1993 Clinton health-care plan and from then-Gov. Mitt Romney’s plan in Massachusetts. The unified Republican opposition was not about policy differences but was part of a deliberate strategy, crafted on the eve of Barack Obama’s inauguration in 2009, to oppose and delegitimize all his major initiatives. On immigration reform, the Senate had broad bipartisan agreement during the Obama years, but legislation died in the House because of a desire to keep the president from securing a victory. Once Donald Trump took office, Republican senators who had supported those reforms turned against them. For example, Florida’s Marco Rubio, one of the key architects of the earlier reform, shifted to back Trump’s more restrictive approach.

From health care to climate to stimulus to deficit reduction to trade, debates where there was long common ground - and where there still is significant overlap - have been superseded by partisan warfare.

Myth No. 3: Bipartisanship is more valued by voters than by politicians.

Voters often express frustration that their elected representatives just won't stop bickering and do the right thing. More than two decades ago, John Hibbing and Elizabeth Theiss-Morse documented in their book "Congress as Public Enemy" that voters have little patience for the actual workings of democracy, its unruly debates and inevitable compromises. As a result, they embrace rhetoric of bipartisanship to avoid the unseemliness of politics. A recent survey from USA Today, Public Agenda and Ipsos found that Americans "are sick and tired of being so divided."

In reality, the voters who are best informed, who comprise less than a majority of voters, are also the voters most attached to parties, reinforced by activists and partisan media, expect their representatives to toe the party line, not embrace bipartisanship. This is consistent with well-demonstrated affective negative partisanship: Voters view the other party as the enemy and don't approve of their representatives consorting with it. The credible threat of a primary challenge is a frequent topic of discussion and concern in the halls of Congress.

When then-first lady Hillary Clinton struggled with the administration's version of health-care reform in 1993, Sen. Daniel Patrick Moynihan said, "Something like this passes with 75 votes or not at all." Sen. Chris Coons has said a reason most of his legislation is bipartisan is that "if you introduce legislation that only has support from one party, it will not last very long."

But the aphorism that major social policy requires broad bipartisan consensus has been belied by a host of examples. It is true that many Republicans joined Democrats in the final votes to pass Social Security and Medicare, and a larger number worked with the majority Democrats on perfecting the legislation and making sure the programs were implemented. The same happened with Democrats' support for implementing George W. Bush's Medicare Part D prescription drug benefit. But bitter partisan warfare and rhetoric marked the lead-up to these programs' passage, and successes came because enough members of the majority party backed those proposals. On Medicare Part D, for instance, initial Democratic support declined dramatically in the face of partisan hardball played by then-Speaker Dennis Hastert and Senate Republican leaders. The New York Times reported the day after the House vote: "A fiercely polarized House approved legislation on Saturday that would add prescription drug benefits to Medicare, after an all-night session and an extraordinary bout of Republican arm-twisting to muster a majority. The Senate opened its debate under threat of a filibuster."

Myth No. 5: The two parties are equally to blame for partisan squabbles.

Democrats and Republicans are often both held responsible for the rise of hyper-partisanship. The term of choice among a minority of skeptics is "false equivalence." After McCain's death, former NBC anchor Tom Brokaw said that "both parties, they're more ideologues than they are authentic people." Howard Schultz's aborted independent effort early in the 2020 presidential campaign also faulted both parties for Washington's problems.

But our research has found that one party bears more of the blame. The bipartisanship that was common in the House through the mid-1970s began to fray as racial and cultural differences came to define the increasingly polarized and competitive parties. Partisan polarization began with these shifts in the coalitional bases of the parties, but Republicans, because of their increasingly homogeneous positions on race, religious traditionalism and other cultural issues, had more incentive to move right than Democrats had to move left. In the 1990s, Newt Gingrich and his allies fomented tribalism, using the House ethics process as a political weapon and uniting the GOP into a parliamentary-style opposition party. They had important and vocal allies in partisan media, starting with Rush Limbaugh and talk radio. Much the same happened a bit later in the Senate, where McConnell turned the filibuster into a weapon of mass obstruction and got his party to unite against every Obama initiative.

Today, Republicans are one of the most extreme (even radical) conservative parties in the democratic world, with no members in the House and arguably barely one in the Senate who would qualify as moderates or traditional conservatives, while Democrats look like a traditional center-left party. Though the "Squad" of Reps. Alexandria Ocasio-Cortez, Ilhan Omar, Ayanna Pressley and Rashida Tlaib receives much attention, a breakdown of voting records shows that the Democratic caucus is populated by more moderates than leftists. The asymmetric nature of this polarization makes bipartisanship almost impossible.

Five Myths is a weekly opinion feature from The Washington Post.