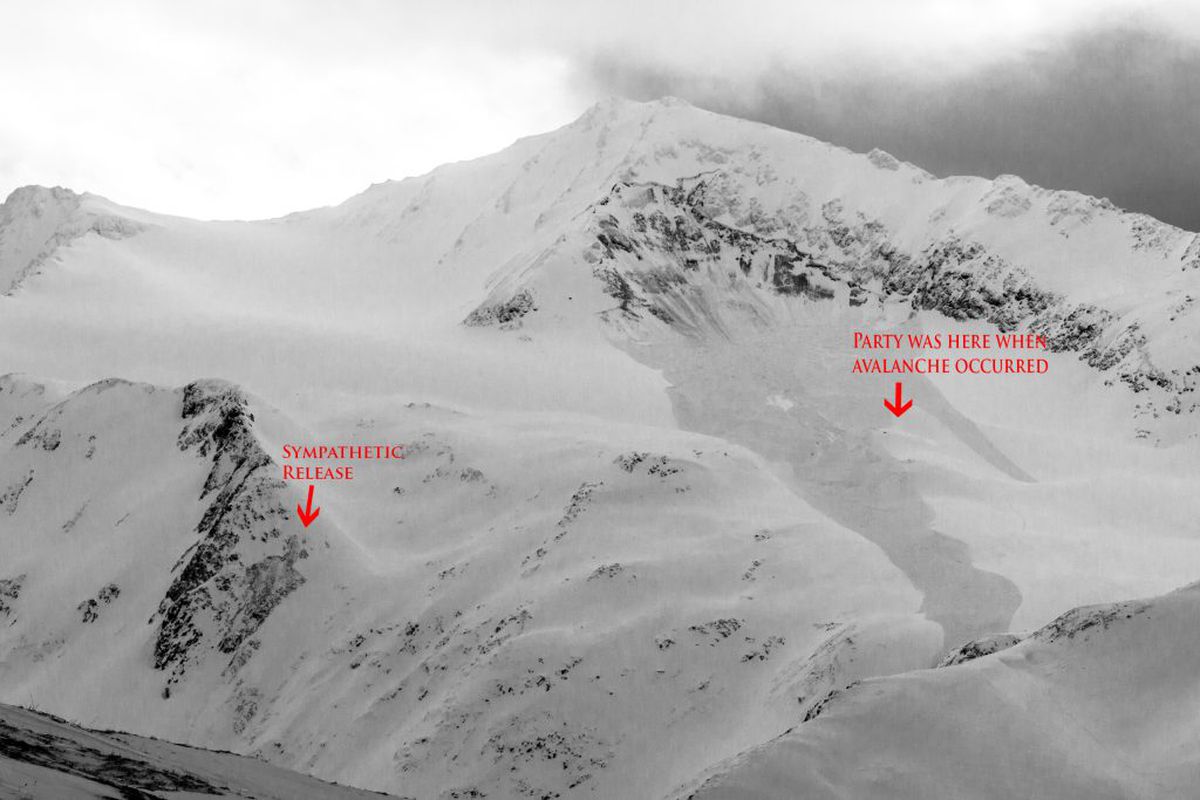 The aftermath of the avalanche on Pastoral Peak (Mike Ausman)

The aftermath of the avalanche on Pastoral Peak (Mike Ausman)

Two skiers in Turnagain Pass on Wednesday triggered a large avalanche they escaped only by running out of the way and taking shelter behind a knoll.

Forecasters say the harrowing near-miss serves as a warning about dangerous conditions in the popular winter destination.

The skiers were climbing a route below Pastoral Peak when Wednesday's avalanche occurred, according to the Chugach National Forest Avalanche Information Center.

"It sounded like a distant explosion when it went. We heard and felt the snowpack below us drop several inches," one of the skiers told avalanche forecaster Aleph Johnston-Bloom.

As the pair watched from a spot at about 3,600 feet, the avalanche began barreling toward them from a massive fracture 600 feet above.

They ran to escape it, the pair later told the forecaster.

"When I realized what was happening, I looked around and saw this small knoll. We headed for it and hid behind it," one told Johnston-Bloom. "While turning around, one of my skis popped off."

He opted to ditch his other ski instead of going back to fetch the first one.

The slide covered the spot where they had stood moments before.

The avalanche measured 1,000 feet wide, 3,000 feet long and roughly 10 feet high at the crown, according to the center. The shudders it sent through the snowpack triggered another slide on a slope about a half-mile away.

The avalanches came as no surprise to Johnston-Bloom, who noted that forecasters warned last week of a "deep persistent slab problem" that could trigger large slides with little or no warning.

"It's a very scary setup," she said in an interview Thursday.

Here's why: A weak layer of sugary snow sits at the bottom of the snowpack combined with a crust from an early November rain. Over that is 3 to 10 feet of heavy snow that's become a stiff slab that can slide all in one big piece.

Added to that risky scenario is the fact that there aren't many indications that the snowpack is so unstable, Johnston-Bloom said.

The skiers told the center they didn't hear or see any of the normal warning signs: no recent avalanches, shooting cracks or loud whumpfs. They saw tracks on the slope from the day before.

This type of slab avalanche can be hard to trigger but when one happens, the slide is so big it has potentially disastrous results, Johnston-Bloom said.

"It's like playing Russian roulette," she said. "You could be fine, but you could also not be fine and have something like this happen."

She recommended against traveling above 3,000 feet in avalanche terrain — slopes steeper than 30 degrees — in Turnagain Pass until the conditions change.

The center issued a moderate avalanche danger advisory above 2,500 feet on Thursday and warned that deep slab avalanches are possible above 3,000 feet. The advisory warns backcountry travelers to evaluate snow and terrain carefully.