Frenzied sled dogs, an eager 4-year-old, and an Alaska rite of passage 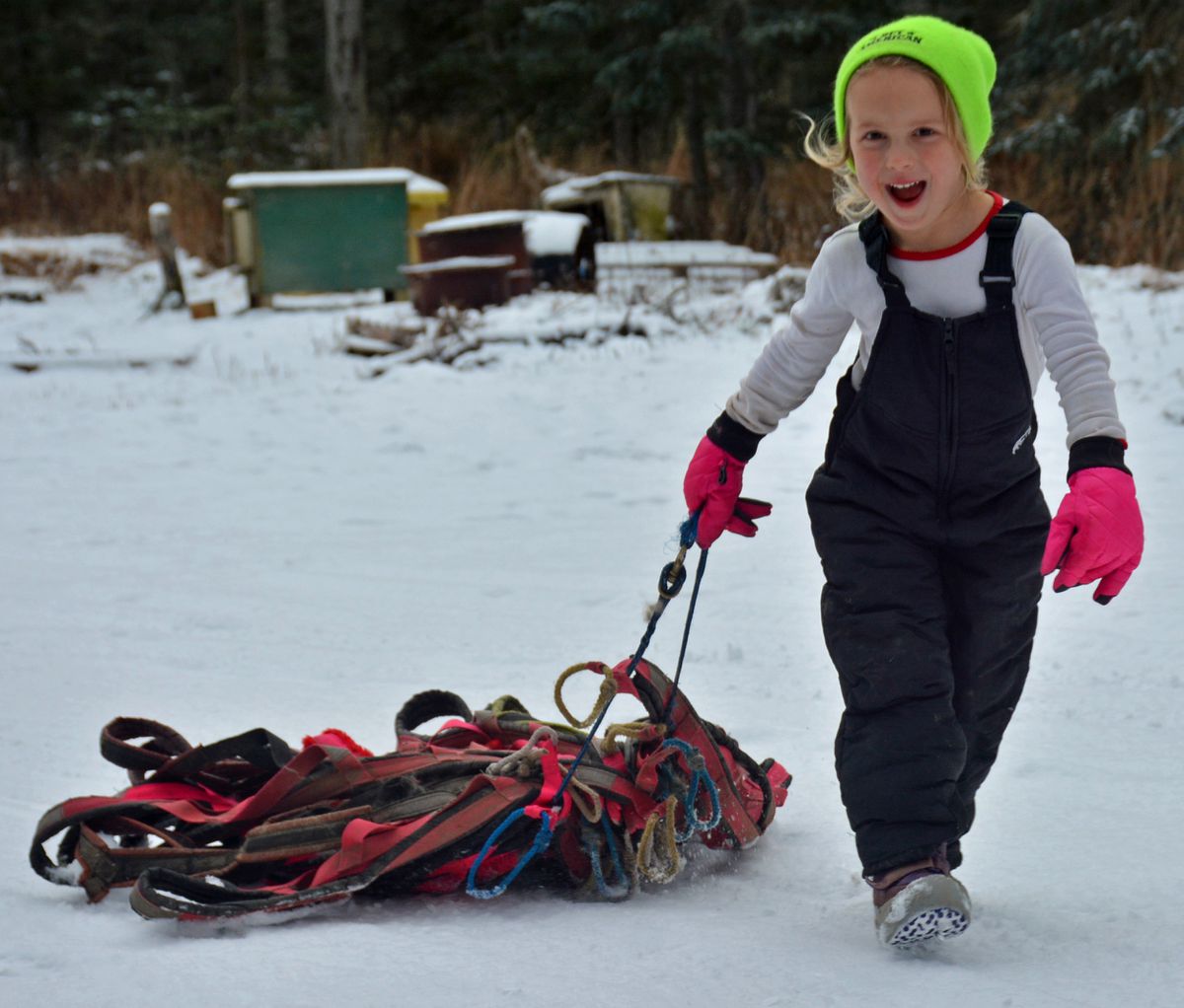 Being a young musher is more than just running dogs; it’s also taking part in all the associated chores, such as gathering up and putting harnesses away, even though the bundle weighs as much as Lynx Robertia does. (Photo by Joseph Robertia)

Being a young musher is more than just running dogs; it’s also taking part in all the associated chores, such as gathering up and putting harnesses away, even though the bundle weighs as much as Lynx Robertia does. (Photo by Joseph Robertia)

KASILOF — The sun was just beginning its short-winter-day slide across the horizon, but we savored the minuscule morning warmth it granted from the few pink rays able to slant through the vaulting and leafless cottonwoods that line the back of our rural Kasilof property. A delicate snow sifted down to earth, the waning of an overnight storm that dropped nearly a foot of fresh powder.

The perfect day for an Alaska rite of passage.

Since Lynx, my 4-year-old daughter, dragged a bundle of harnesses into the yard, our sled dogs — which have a hair trigger that goes off at the first sight of any mushing gear — had been in a literal frenzy. We all set to our usual tasks. My wife, Colleen — an Iditarod and Yukon Quest veteran — and I scrambled to harness and hitch dogs to the gangline while Lynx stood at the front, petting the leaders and muscling the string of huskies taught.

As I plugged the last dog in, I motioned to her to come join me at the back of the sled. Between rosy cheeks, a 1,000-watt smile beamed across the small portion of her uncovered face beneath beanie and above neck gaiter. She shambled as swiftly as she could in her bulky winter boots and layers of clothing. Puffs of her breath steamed in the chilly air.

"Are you sure you're ready for this?" I asked.

Lynx had ridden on the runners with me a handful of times this season, but always on the return leg of a training run, once we were headed home and the dogs were moving at a slower and more manageable clip. This would be her first time taking a fresh team out of the yard, which is at best controlled chaos for the first few minutes. Imagine being shot out of a cannon.

"Then hold on tight, and say the magic word," I said, and with that she shouted "HIKE!"

I pulled the snowhook anchoring us. We instantaneously accelerated, careening down the trail at warp speed, Lynx joyfully shrieking "Weeeeeeeee" at the top of her little lungs and the dogs loping all the faster at the shrill sound of her excitement.

But this was a nexus, these two lifestyles finally interconnecting, and it was by design.

After Colleen's last Iditarod in 2012, our dogs were still at an age she could have gone back a few more times to try to improve on her career-best placement of 21st, but the goal of our kennel was never to exclusively race. Building our kennel from runts, rescues and rejects from other mushers and local animal shelters, we hoped to inspire people to see the inherent worth in all dogs.

We wanted to pass this ethos to our own offspring since it is our belief that children imbued with a matrix of caring for and about animals in their formative years will carry into adulthood the ideals of respecting and cherishing the natural world — a value I find to be seemingly more rare with each passing generation.

So, with the dogs in their prime, we did the unthinkable. We walked away from racing to have a baby and embrace recreational mushing.

This was bittersweet in the beginning, shifting from driving dogs in storms and severely low temperatures for the better part of each day to warming up bottles of milk, changing diapers and fulfilling my other duties as a stay-at-home dad.

The kennel chores didn't diminish, though. My daughter was born into a life of labor: chopping blocks of meat, lugging buckets of gruel, hours of chiseling frozen poop to keep the yard clean, and of course continuing to exercise and mentally enrich the dogs. The racing stopped, but not the need to keep them physically fit and cognitively content.

Since Lynx was just a few weeks old, we wore her in front-facing slings to ignite her senses with all the sights, sounds and smells of the dog yard. Once she graduated to being in a backpack and could hold her own head up, she started riding on my back for fall 4-wheeler training or sitting in someone's lap during winter sled excursions.

She has joined the howling canine chorus since she could first make the sound and she could name all 40 dogs by sight not long after learning to speak. After years of watching the team work — listening to me explain the purpose of each dog's position and monitoring them as they execute their tasks with both individual precision and team cohesion — she intuitively understands these interactions.

She knows when and where to call "gee" or "haw," she comprehends how to govern the speed of team to avoid tangles, and she can recognize a dog off-gait. Her quotidian existence is the realm between two worlds: canine and civilized, or at least as civilized as mushers can get.

She appreciates the details of a single snowflake, demands to be outdoors during the bulk of daylight hours, shows concern for dogs that are ill or injured, and displays compassion beyond her years during those painful moments when a dog takes its dying breath. Our initial goal for her was to learn empathy, responsibility, the foundation of a solid work ethic and commitment to long-term goals, but it's clear so much more is being transmitted to her.

How will this affect her ability to organize information later in life, alter her perception about the relationship of people and animals, impact her self-esteem when confronted with challenges, and ultimately shape her adult personality? I'm not yet sure, but I think the outcomes will be beneficial, and in the meantime the escapades we're sharing as a mushing family are enormously fulfilling.

Standing silently on the runners behind my daughter, my wife in the sled bag, I watched Lynx command the team to break trail. All of us — humans and dogs alike — were doing what we loved most, together. I knew in that moment a memory was being made that would forever warm my heart, and it got even better once we got back to the kennel.

"I can't believe that's what I've been missing this whole time," Lynx said, comprehending — possibly for the first time — the erudite concept that beyond euphoria there is also enlightenment. As one could imagine, this was a life-changing realization for her, as made evident by her next declaration.