A chilly morning, a North Dakota wheat field, a flock of geese and the gift of a lifetime 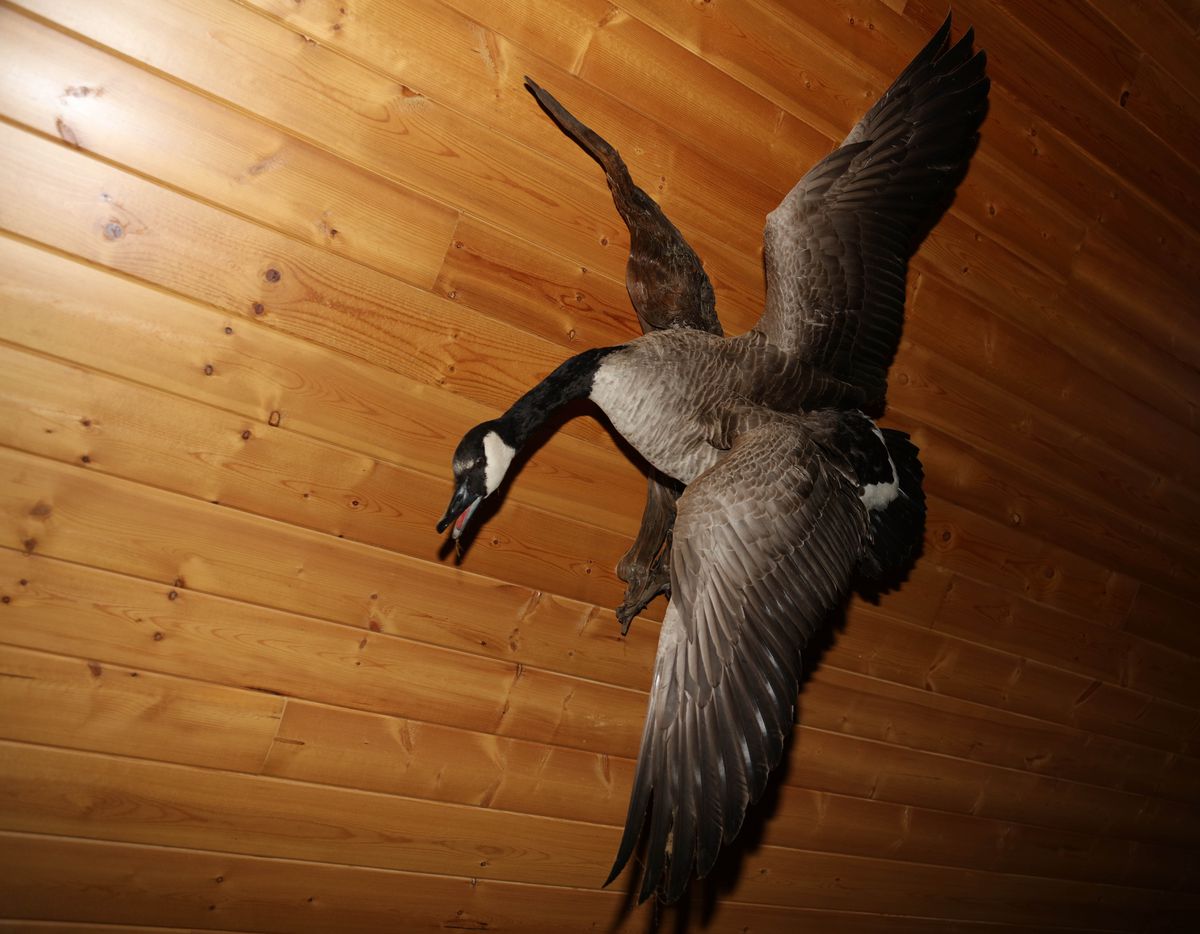 One of the few mounts the author has, the Canada goose is a reminder of when life really began. Nov. 2019. (Steve Meyer photo)

One of the few mounts the author has, the Canada goose is a reminder of when life really began. Nov. 2019. (Steve Meyer photo)

The horizon to the east, with its persimmon cast, promised the sun would yet again appear. Not soon enough, I thought as my frozen fingers sought brief refuge from the cold air that blanketed the plowed wheat stubble field.

The respite lasted a few moments and I was back on my hands and knees following the shadows of my dad and his hunting partner into the field, desperate to keep them in sight under the starlight as the gap between us widened.

The pair ahead of me didn’t look back. The field was a half-mile wide, bordered by a fencerow on the western end, where a pile of rocks stacked over years of the plow turning them up and farm boys following in the wake, tossing them to the pile.

Before we started across the field, Dad explained that he and his partner had scouted the area the evening before. They had spotted a flock of Canada geese settled in for the night on the opposite side of the rock pile. He explained the wind was coming out of the east and that when the geese took flight for their morning rituals, they would fly into the wind and directly over the rock pile. All we had to do, he explained, was get behind the rockpile without being detected and wait for them to fly over.

“Keep your head down and don’t make noise.” The words running through my head as I crawled across the rough field, covered with a half-inch of snow. As the gap widened between me and the hunters, my fears turned to being late for the lift-off of the Canadas. By the time I crawled up next to them, huddled behind the rocks, the cold I had felt before was gone.

The sunrise, obscured by a low hill to the east, began to reveal the flat country before us and the fence line running north and south from our hide. Dad scooted over to me and whispered in my ear, “It’s still about 15 minutes before shooting light, the geese are on goose time, and they’ll fly when they want, just be patient. Just before they fly, they will start talking, you’ll hear them, and you’ll know the time is near.”

I was scared to breathe lest I give away the subterfuge, and that my breathing might drown out the sound of the honks that would announce the intentions of the flock. As the light enveloped the field, and Dad gave me a nod that I interpreted as it being legal to shoot, I wanted to peek, to see the geese. I didn’t.

After an eternity, I heard the first honk, then another, and then it seemed like someone had arranged an orchestra on the other side of the rockpile. As the noise became so loud as to drown out a conversation, had we wanted to have one, I saw Dad and his partner stiffen. In a moment, the first gray and black shape appeared in front of our position, coming our way. “Shoot, shoot,” I thought as more birds came directly over us. Then in an instant, the guns were up and there were geese falling at the shots, and in another instant, it was over, the honks continuing as the big birds went over the hill.

The hunters looked at me and grinned, and Dad said, “Go ahead.” I ran, or tried to run, to a downed bird. Having crawled all the way out, I hadn’t experienced the way plowed soil cakes to boots, and my run turned to a struggle to lift a foot that felt as if it weighed more than me. Picking up the first goose in my path, I stopped and held it in my hands, feeling the warmth of its great body.

Dad came over to me with the three geese he had picked up. He handed me one and said, “Here you go, there’s two for each of us.”

As the men headed back to the truck, I struggled with the weight of my mudded boots and the two geese. I lagged behind and fretted that my arms weren’t strong enough to hold the birds up out of the mud.

When I stumbled onto the old field road where we had parked, the guns were put away in their cases and the hunters were sitting on the tailgate. A thermos and a bottle of blackberry brandy sitting between them, a traditional toast to the game, to the day, to the life that I would come to know.

When I had struggled up the shallow ditch to the road, I watched the men. Looking for approval, terrified my efforts wouldn’t pass. Even the grins spread across their faces didn’t assure me. Maybe they are laughing at me, I thought.

Dad’s hunting buddy got up and took the geese from me, put his hand on my shoulder, and said, “You did good.” I’m not sure if 6-year-old boys can swoon, but I suspect if I could, I did. Dad, still grinning, said, “This hunting is a lot of work, we still have some to do. These birds have to be cleaned when we get home. You still want to be a hunter?”

The grin that threatened to break my face must have been answer enough. “Here,” he said as he handed me his coffee cup, “you get a sip of this, you’ve earned it.”

As the holidays approach, the season for gift-giving, I think of this morning, and I think what a shame it is that we often don’t recognize things for what they are until advancing years prompts reflection.

That morning on the North Dakota prairie, Dad gave me a gift, and now I understand that of all the gifts I’ve received over the years, this gift he gave me was for a lifetime, the best kind of gift of all.