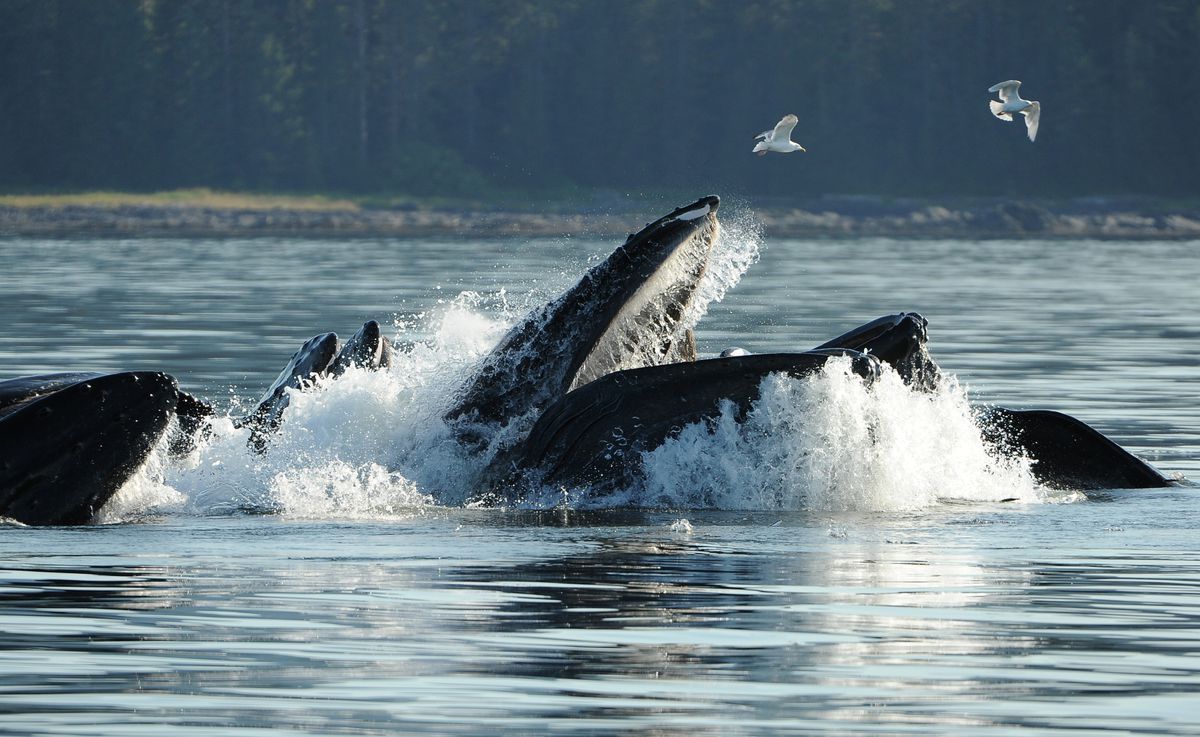 Two kayakers were knocked into the water Monday by a humpback whale. Video taken of the episode indicated that the pair of women, who were shaken but unharmed, were nearly enveloped in the whale’s mouth.

“I’m thinking, ‘I’m dead. I’m dead.’ I thought it was going to land on me. Next thing I know, I’m underwater,” Liz Cottriel, one of the kayakers, told Fox television affiliate KMPH.

What started as a peaceful morning of kayaking turned into a close call for two friends at Avila Beach.
Video shows the pair appearing to almost be swallowed by a humpback whale.https://t.co/dJZulNZedN pic.twitter.com/JEyZibxjxi

Cottriel and a friend, Julie McSorley, were paddling in California’s San Luis Obispo Bay, where humpback whales have reportedly been moving into shallower waters in search of food. Those seeking an up-close view are warned by local authorities to, among other precautions, stay away from large schools of fish, because they attract the whales.

McSorley told KMPH, "I saw the big pool of fish, the big bait ball come up out of the water. I saw the whale come up. I thought, ‘Oh no! It’s too close.’

“The whale was right here in my face, literally,” she said.

“All of a sudden, I lifted up, and I was in the water,” McSorley continued. She was using her phone to take video of the scene at the time, as were others nearby who saw activity by fish and birds and hoped they might soon capture a whale breach, which occurs when most or all of the whale’s body leaves the water.

Some of the other kayakers and paddleboarders came up to Cottriel and McSorley to check on their well-being.

“They thought the whale had the kayak in its mouth,” said McSorley. Fortunately, that was not the case, and the two women were able to paddle back to shore at nearby Avila Beach.

Lucky to be alive: an Avila Beach woman says she is okay after a whale capsized her kayak (shown here). Hear from her and tips for staying safe out on the water tonight at 10&11. (Video: Kellie Balentine) @KSBY pic.twitter.com/WOy4itCzhW

An official with a company that conducts whale-watching tours in the area told KSBY recently that humpback season generally runs from May through November, and that the whales have been active this season. Another pair of kayakers were hoisted upward by a whale in San Luis Obispo Bay last week, but they managed to remain in their boat.

“I thought we were going to tip over for sure,” one of the kayakers, Kathleen MacMahon, told the Fresno Bee. “But we didn’t, and the whale came right up next to us.”

Her companion, Joyce DeLine, described the incident as “thrilling and scary at the same time.” They also came upon a school of fish in Port San Luis Harbor, one of which even leaped into their boat.

“You could tell something was going to happen very close,” MacMahon said. “All of a sudden, the whale came up and we were, like, lifted in the air.”

A news release Tuesday from the Port San Luis Harbor District (via sanluisobispo.com) reminded paddlers and others that “it is illegal to cause a marine mammal to alter their behaviors in any way.” An official with the agency could not be immediately reached for comment on Monday’s incident.

Humpback whales feed on krill, a small crustacean, as well as on small fish, and they are known to travel great distances, up to 5,000 miles in some cases, during their seasonal migrations. According to the National Oceanic and Atmospheric Administration, the whales, which can weight up to 40 tons, have increased in number since a 1985 moratorium on commercial whaling, but four of their 14 distinct population segments are still listed as endangered.

Some whale-watching organizations have suggested that humpbacks appear to breach more often than other species of whales. A 2016 study published by Marine Mammal Science posited that whales breach to use the force of the crash back into the water as a means of communicating over large distances.