Tweed or no tweed, shooting clays for a worthy cause is always a good look 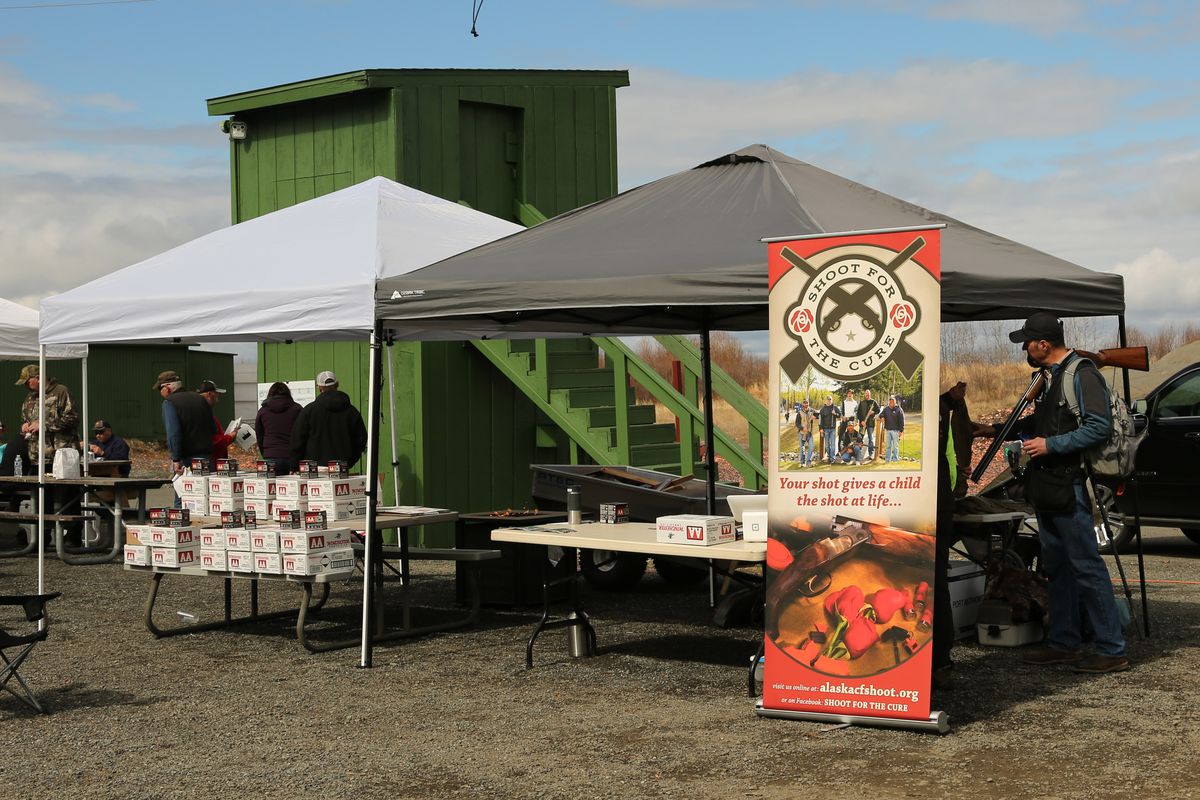 Cases of shotguns shells ready for the festivities. May 2021. (Photo by Steve Meyer)

Cases of shotguns shells ready for the festivities. May 2021. (Photo by Steve Meyer)

“I’ll hazard a guess that you’ve been across the pond and shot driven grouse,” I said to the dapper gentleman approaching me, who had been introduced as one of my teammates a bit earlier while sitting at a table with the rest of the team.

It wasn’t until he approached at full height that I noticed his dress — tweed, breeks, “wellies” and necktie. His attire was a replica of the photographs I had seen from field sports magazines and gun books from the British Isles.

I appreciate the traditions of cultures that occasionally make an appearance on shooting ranges or in the field. Last fall I told Christine that maybe I would start honoring some of those traditions in the field by dressing in three-piece wool tweed, complete with a necktie.

During this exchange, I thought of two things. One, this fellow looks about as classy as anyone I had ever seen on a range, and two, Karen, what have you gotten me into?

A couple of weeks ago, Karen Rey, the driving force for Shoot for the Cure, an organization that exists to raise research funds for cystic fibrosis, sent a message. “Hey,” she said, “we are doing walk-through sporting clays at Birchwood for the spring fundraiser, why don’t you and Christine come up for it?”

Timing being critical to social graces, Karen’s turned out impeccable. We had an awful start to a new year after suffering through 2020. Neither of us wanted a vaccination, but we bit the bullet toward getting back to normalcy and we were ready to interact with folks we enjoy.

Christine is the clay pigeon shooter in our partnership. It isn’t that I don’t enjoy it; I concur with the many folks who have uttered the phrase, “It’s the most fun you can have standing up with your clothes on.” For me, it is too much fun, and my addictive personality demands I enjoy it from arm’s-length, lest I shoot myself into bankruptcy.

“I think I can get Christine to come up,” I responded. “I’ll let you know.” It took no convincing at all. Christine agreed, and I told Karen, thinking it would be Christine shooting and me being the gun-bearer.

A couple days later, Karen messaged and said she put us on separate teams that would shoot Friday afternoon. In distress, I told her I wasn’t much of a clay shooter, I hadn’t ever shot sporting clays, and I didn’t want to mess up a team with my incompetence. She laughed and insisted I needn’t worry as the shoot was to raise funds and awareness, not competition. She knew I wouldn’t back out. “Well played, Karen,” I thought.

A bit after noon, a safety briefing was held for the crowd of shooters eager to get started slapping triggers. The Birchwood range is close to the rather busy local airstrip, so shooters were reminded to watch for and concede the airspace to low-flying aircraft. Only in Alaska.

After the briefing, my team gathered up guns and gear bags and walked down the gravel stretch of road leading to the course. The course consisted of 13 shooting stations with two target-throwing machines at each station, giving us 26 different looks. We would fire six or eight rounds at each location for a total of 100 shots fired to complete the course.

Our team started at shooting station No. 2, and as we walked down the path toward it there were two sobering reminders of why we were there: Posters of real Alaskans who had been afflicted by cystic fibrosis, a rare and debilitating lung disease.

Shoot for the Cure was founded in 2006 by Karen and the late Ronnie Allen. Karen’s daughter struggled with the disease and they came to understand the difficulties people from Alaska faced in getting treatment at a distance. Since both loved shooting sporting clays, they decided to create a sporting clays “funraising” activity.

It started with 10 teams and now has more than 30, with support coming from venues and shooters across Alaska. One must attend one of these events to appreciate the volume of work required to make it successful. Having been around this sort of thing my entire life, I can attest it is as well-run as any shooting event I’ve ever seen. One could only guess at the number of volunteer hours that make it possible.

With a renewed purpose for the day, we strode to the firing area. The gentleman who could have walked in from the Scottish moors stepped to the shooting box and dropped two shotshells into the side by side breech of his British hammer gun. Yep, he paid the ultimate homage to the sport by shooting a shotgun built in the late 1800s, a relic to some, a gorgeous example of the gun-making art for those who cherish the history of wingshooting.

The performance of that old gun and the man behind it did not disappoint. He turned clay pigeons to dust with little effort. When it was my turn, I stepped up with my 28-gauge over/under, wishing I had not let vanity choose, leaving the side by side I don’t shoot so well at home.

Nothing to be done except say “pull.” The thrower released a clay target that rolled out on a smooth ramp and then hit a bump that made it jump into the air. It was my first experience with that sort of target and to my surprise, I hit it. I hit some more and felt decent moving on to station three.

Shotgunners will appreciate those times when you are shooting well, and then you move and can’t hit your butt with both hands. One target out of eight at station three. And so my day went, shoot great, shoot terrible, back and forth, assuring myself I would not step to the winners’ circle. My teammates had shot together and were well acquainted, and they welcomed me despite my erratic performance.

But really, I and everyone else became part of the circle of winners benefiting from this wonderful event that Ronnie and Karen built, and Karen perpetuates.

We left grateful for the invite we had received and to be able to participate. As we walked away, I said to Christine, “Hey, how expensive is that tweed shooting apparel Holland and Holland sells?”

She just looked at me, dressed as usual, looking like I needed to find my horse, and I said, “Well, you know, for next year.”