The little boat that could: 21-foot setnet skiff makes the trip from Ninilchik to Naknek via Cook Inlet and Iliamna Lake 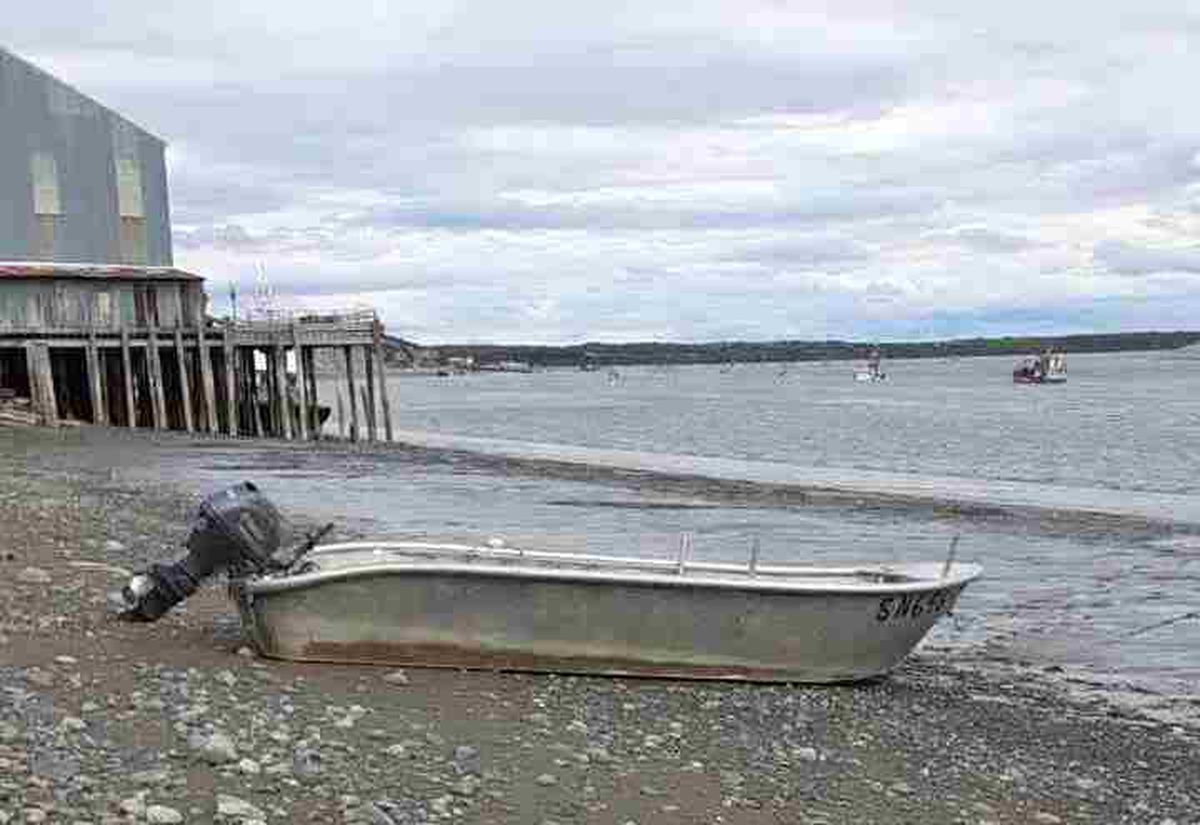 John Schandelmeier's Carlson skiff sits on the beach in front of the Red Salmon Cannery this week in Naknek. Schandelmeier, a commercial fisherman, crossed Cook Inlet and Iliamna Lake in the 21-foot boat in June 2021. (Photo by John Schandelmeier)

John Schandelmeier's Carlson skiff sits on the beach in front of the Red Salmon Cannery this week in Naknek. Schandelmeier, a commercial fisherman, crossed Cook Inlet and Iliamna Lake in the 21-foot boat in June 2021. (Photo by John Schandelmeier)

“You’re going to take that little boat across the Inlet?!?”

That was the prevailing theme around the Ninilchik Harbor when we showed up with a 21-foot open setnet skiff, headed for Bristol Bay.

I have traveled across Cook Inlet from Ninilchik a number of times and never thought much of it, but it had been 20 years since my last crossing. Times have changed.

Boats are bigger and they have far more power. Most people navigate by GPS rather than compass. The 40-mile crossing from Ninilchik to the mouth of Johnson River is obvious, as long as the fog doesn’t roll in. A compass heading is adequate.

Dakota Tennant, Ben Doudna and I motored out of the Ninilchik Harbor at 3:30 on a Wednesday afternoon. The wind was out of the southwest, quartering on our starboard bow.

Twenty knots can be trying in a small skiff, but we knew the closer we approached the mountains on the west side of the Inlet, the better protected we would be.

Our destination that evening was Iliamna Bay. Williamsport lies at the head of Iliamna Bay, the jump-off point of the portage trail into Lake Iliamna. The 15-mile road is the quick way to Bristol Bay.

Each year a couple hundred 32-foot drift boats make the trip from Homer to the bay and back. Skiffs used to regularly make the trip, but not so much anymore.

Fifty years in little skiffs have taught me caution. The ocean is unforgiving to the careless.

Our trip across was uneventful. The seas were at 5 feet 20 miles out of Ninilchik, but avoiding kelp beds slowed us more than waves. Once we reached the shelter of the big mountains on the west side, we were able to open up our 40-horsepower Yamaha and roll right along.

The crossing was completed in three hours. The remaining 50 miles to the portage seemed to go quickly with the tide in our favor and a following sea.

The mountains along the western coast are spectacular. Ten-thousand-foot Mount Iliamna is the jewel, but the cliffs below Chinitna Bay and Oil Bay have their own attraction.

Oil Bay is the head of an old road that leads up the ridge to the site of Alaska’s first oil well. It was abandoned decades ago for various reasons. I visited there in the late ’60s and it was overgrown then, and the equipment left behind was rusting into the ground.

The rain and mist that had been plaguing us the entire trip hit us with renewed vigor in Iliamna Bay. We hung at anchor until the tide was high enough to reach the portage landing. Dinner was Pilot bread and peanut butter.

The Iliamna portage road was pushed in just before 1920. Carl Williams showed up in 1934 and established a landing at Pile Bay, on the Iliamna Lake side. He portaged the first boat across in 1938.

The Williams family has maintained the business since then and formed the Iliamna Transportation Company, which provides much-needed services to individuals and businesses on both ends of the 15-mile road.

The portage has improved considerably since my first trip across in 1974, but it is still a bit of a goat trail coming up along the cliff on the inlet side. It is mostly used for commercial business. It’s surprising the tourism industry has not utilized this shortened route into Alaska’s largest lake.

Iliamna was flat and beautiful when the three of us left Pile Bay with 160 miles between us and the fishing town of Naknek.

Lake Iliamna is 90 miles long and 40 miles wide. We planned to travel the east side en route to the village of Igiugig and the head of the Kvichak River. The Kvichak has historically been the most productive of Bristol Bay’s sockeye fishery, which is the largest in the world.

Our calm lake gradually dissolved into whitecaps. A cold northeast wind barreled off snowcapped peaks and slapped us with spray as we crossed Kahonak Bay halfway down the lake. Protective cover was spotty for 15 or 20 miles, slowing our progress.

Not far out of Igiugig, Iliamna decided we had had enough and began to calm.

The entrance to the Kvichak was a welcome sight. Our fuel supply seemed more than adequate, but it isn’t fun to be watching the fuel gauge. We added some $9-per-gallon gas and continued our journey.

The only town on the Kvichak River is Levelock, near the Bristol Bay coast. Tidal effect from Kvichak Bay reaches 10 or 15 miles above Levelock, and as we neared Levelock it became apparent we were at the wrong stage of the tide to make a comfortable run all of the way to Naknek.

We spotted a good brush pile near the Levelock landing and pulled in to camp and enjoy a fire. Our first hot meal in two days was more than welcome.

A three-hour nap ended with the incoming tide. Fog shrouded the shoreline out of our camp, but high tide made it easy traveling. Soon we were clear of the fog and pounding into a stiff Naknek breeze.

Two hours of steady travel brought us into the entrance to the Naknek River, and a few miles upriver we anchored at the Red Salmon cannery. Our journey was complete.

Yes, we took that little skiff across Cook Inlet. And along Lake Iliamna.

Truth is, it was an uneventful trip, as all trips should be. Adventures are the result of mistakes made in preparation and execution. Water is an unforgiving medium. Whether one is crossing Cook Inlet or floating down the Kenai River, preparation should be adequate for the trip, and safety should be the foremost consideration.

May your next outing be a memorable but uneventful one.