When a friend asks to go moose hunting, an ‘avid hunter’ wonders how much ignorance to share 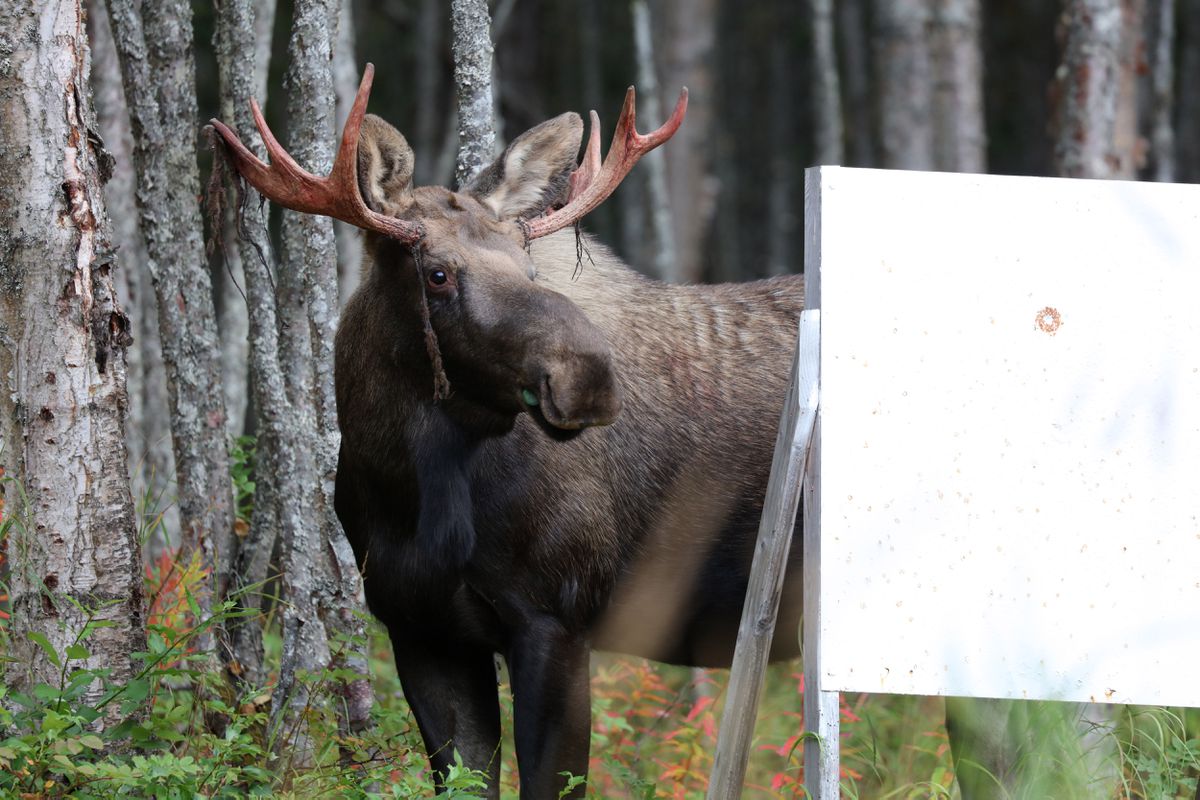 A moose behind a target stand - for most of Alaska this would be an illegal bull moose to shoot. (Photo by Steve Meyer)

A moose behind a target stand - for most of Alaska this would be an illegal bull moose to shoot. (Photo by Steve Meyer)

Before committing to taking a friend moose hunting for the first time, it was important for me to stress all the reasons that it might be a terrible idea.

The limits of my knowledge are too numerous to list, but as applied to moose hunting, my limitations begin where hunters often say “the real work begins” — my experience with moose has involved processing meat more than finding a suitable animal.

The conversation started when a friend called to ask if I would take her moose hunting for the first time. Several people had promised to take her, but it had never worked out. She liked the idea of self-sufficiency and filling the freezer with organic meat.

In most circumstances, the idea of leaving your comfort zone with empowering thoughts of success is something you really want to support as a friend. I want to be the friend that says, yes, let’s do it! And off we go on a grand adventure.

Instead, I wondered how much of my ignorance to share. Would it be most helpful for her to know that I was not one of the rare and rugged individuals who has singlehandedly shot and packed out a moose before spending a week in the shed alone butchering it for my winter’s meat?

A cartoon image of me with a 1,500-pound moose strapped to my backpack came to mind as she asked me if I was still on the line.

I’m here, I said. I was just thinking that moose hunting is serious business. I mean, it’s like raising a child. It takes a village.

She pointed out that she knew we could do it, and I promised to think it over a bit and get back to her.

It's been a few days, and I'm still thinking about it.

My first thought was that a good approach would be to share my wealth of inexperience and a collection of stories about things that could go wrong to convince her we might want to add someone to our hunting team who actually knows more about moose hunting than getting put on hamburger duty again.

Another thought was to suggest we sign up for the roadkill list. Our chances of receiving a moose hit by a car through the Alaska Department of Public Safety program might be greater than the odds of two novices finding a legal bull. Working on a salvage team could be a great experience in processing an animal that often requires a winch, trailer and battery-powered reciprocating saw.

As I pondered my approach, I also thought about my motivations as a hunter. I have benefited from moose hunters my entire life, and I've provided a notably small amount of help with the work involved.

But, procuring moose meat as a hunter is often much harder than one might think, and I wasn’t sure if my friend knew even less than me about exactly how hard it could be.

People might compare it as a healthy alternative to the grocery store, especially if it looks like a full freezer of individually wrapped meat in butcher paper. But the grocery store generally keeps its product in stock. And you aren’t charged for the opportunity to shop if you don’t find what you’re looking for.

Perhaps she thought I would be a good hunting partner because I’m a self-professed “avid hunter.” It doesn’t matter that my days per year of hunting are primarily for waterfowl and grouse. She doesn’t see those days when Steve and I just sit and watch ducks on a pond or wander the mountains with an appreciation of where ptarmigan live and how they might fare in a given year. I haven’t spent the time to develop that same relationship with moose.

Hunters as a group of people are as vulnerable to generalizations as any other group. Differing stereotypes can exist within the group — a sheep hunter with mountains in the distance looks different from a duck hunter in waders or a moose hunter with elbows to knees in a camp chair.

I couldn’t help but think of Patrick McManus’ description of the “avid hunter”: “There are probably more avid hunters than all the deer and elk hunters combined.” There being no such animal as an “avid.”

This thought led me to wonder how my friend pictured our moose hunt. Did she think we would fly into a location by bush plane, load up the ATVs and head to an established moose camp, or spend time scouting or driving around remote gravel roads on the weekend hoping for a lucky chance?

I wasn’t sure I could afford a fly-in trip, and I don’t have an established moose camp — finding such a spot is often the reward of years of dedication. Did she plan on scouting, and would she consider it offensive for me to ask a long list of questions that kept coming to mind, about planning, gear and experience?

This summer, I have spent every spare day in the field with Steve. We’ve taken the dogs we hunt with on outings to keep them in shape and refresh their training. I’m most excited about taking Rigby, a young Lab, on his first duck hunt this fall.

I count my days afield as a hunter as every moment I spend outside. This includes when times are tough for animals and game birds in the winter and when times are rich in the fall. Every bit of that time goes into the relationship. Just like being part of a family or being a friend isn't about single actions or results.

It wasn’t easy to share all of these thoughts with my friend because it was not a clear yes or no to her suggestion that we shoulder our rifles and bring home the moose bacon. It’s never fun to be the one to say let’s recognize our limitations and be reasonable in our approach. Let’s ease into this idea of moose hunting and commit to it for all it’s worth.

It’s not like going to the store, and that’s the best part.