The Iditarod’s Iron Lady, DeeDee Jonrowe, says the 2018 race will be her last 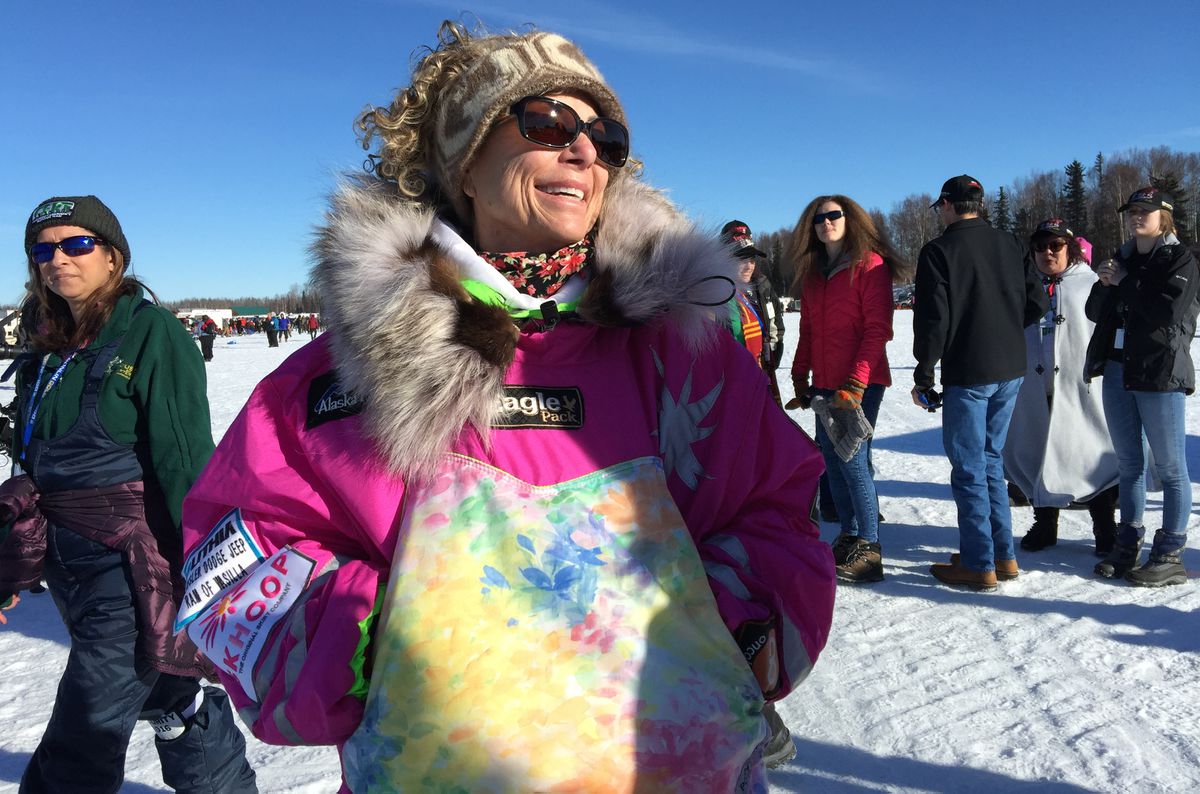 DeeDee Jonrowe spent 363 days, 13 hours, 40 minutes and 3 seconds on the Iditarod trail — and that's just counting the races she has finished.

Since her first 1,000-mile race to Nome in 1980, the iconic musher and her fleet of sled dogs have returned to the Iditarod starting line nearly every year. Despite a serious car accident, despite her cancer, despite the deaths of her parents and despite the wildfire that turned her Willow home to cinders, Jonrowe was there.

And once again, in March 2018, Jonrowe will return to the starting line, wearing her trademark pink parka, with her dogs in matching pink booties.

It will be her 36th time starting the Iditarod and also her last.

"I just felt that it was time to step back," Jonrowe, 63, said in an interview Monday, the day after she announced on her social media accounts that she would retire from the Iditarod after the 2018 race.

Jonrowe said she wants to travel across Alaska by sled dog team one last time, to thank all of those who have supported her physically, emotionally and financially during her dozens of years competing.

"It's important to me to have the opportunity to thank the people of Alaska," she said. "I want to let them know how much they're appreciated."

Jonrowe said no one thing led to her decision. There are her frostbitten fingers, the cost of the race and her husband, Mike. The couple recently celebrated their 40th anniversary, she said, and she would like to spend more time with him — time not always devoted to planning for a race.

"Iditarod is all-consuming, and it can be even a selfish endeavor because it requires such a commitment," she said. "He's always been there."

Then there's her health. In August, Jonrowe had emergency surgery to remove a part of her small intestine — a complication from injuries suffered in a 1996 car accident. What if that sharp pain had started during the race, she wondered aloud. What if her injuries prevented her from taking care of her dogs?

"I've always said that if I was afraid that my dog care was going to possibly be compromised because of my abilities, I would see that as the time to withdraw from 1,000-mile racing," she said. "And that's where I'm at."

Iditarod mushers and race officials spoke of Jonrowe as a tough, kind and dedicated musher.

Aliy Zirkle, of Two Rivers, described Jonrowe as the face of the Iditarod, while Martin Buser, of Big Lake, called her "the ideal Iditarod ambassador."

"Her face and spirit are recognized anywhere you go in Alaska," said Buser, a four-time Iditarod champion.

Zirkle said she remembers watching Jonrowe during the 2003 Iditarod "in awe." Jonrowe started that Iditarod just three weeks after completing chemotherapy treatment, and she placed 18th.

"She's probably the toughest person I know out there," Zirkle said. "And besides just being a heck of a tough individual, she's always been pretty much a happy, upbeat person out on the trail too, which is fun to be around."

[Photos: DeeDee Jonrowe through the years]

King, a four-time Iditarod champion, said Monday that he talks about Jonrowe each time he gives a tour at his sled dog kennel near Denali Park. He tells the visitors about the "remarkable" and "tenacious" person who survived breast cancer, major surgery and a wildfire that destroyed her home, and who kept mushing through it all.

"She's on a short list of Iditarod greats for sure," he said.

She's also one of the few mushers that people know by first name only — she's just DeeDee, said Mark Nordman, Iditarod race marshal and race director. Nordman praised Jonrowe's good attitude and dedication. She always takes the time to talk to people, he said, and she has long been one of the mushers everyone comes to see.

"If you want to have a crowd at a venue or function, you ask DeeDee to come," he said.

Jonrowe said it's tough to pick just one standout memory from her Iditarod career. She will always remember the time her lead sled dogs navigated the team around a charging bison, the time she was stuck on Norton Sound ice for two days near the Shaktoolik checkpoint and her first race when she tried to find the trail with about a half-dozen other teams.

"We would lay our dog teams down in the Farewell Burn, and then we would all fan out and look for the trail marker," she said. "Then we would go back and get our dogs."

Jonrowe said she feels the race is left "in some really good hands."

After the 2018 race, she said, she doesn't plan to give up dogs. This winter, she started agility training with her Labrador retriever, Phoenix, and she said she hopes to continue and expand that work. She is also interested in training dogs for search and rescue and raising money for more training for K-9 units, she said.

And she said she will keep busy tending to her 45 or so sled dogs, four Labradors and 15-year-old Pekingese. She said she has no plans to sell any of them when she retires from long-distance racing.

"They're my family," she said.