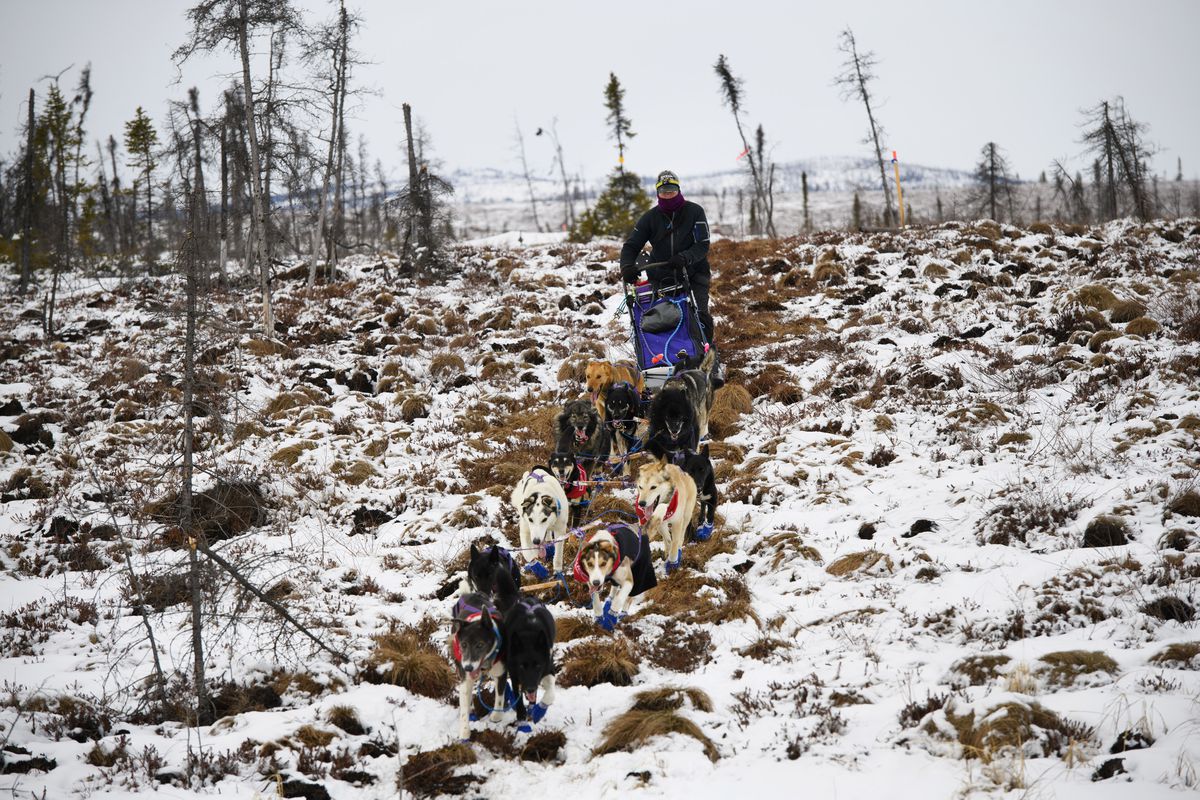 It was about 4:50 p.m. Thursday and he had just parked his sled dog team at the remote checkpoint here.

“Yeah, now we know why Aliy was going 4 and 5 mph,” Fairbanks musher Jessie Royer called over to him. “That’ll rattle your nuts and bolts loose.”

Tussocks. That was the problem. A tussock-studded 80-mile run from Ophir to the ghost town here, on a trail with little to no snow.

It was “like mushing over bowling balls,” Kaiser said. Or “running over a mogul patch,” Royer said.

The Iditarod veterans swapped grievances about the difficult trail as they tended to their dog teams here, at Mile 432 of the 1,000-mile race. Temperatures were around 35 degrees, so warm that frozen meat mushers had sent to the checkpoint ahead of time had started to thaw.

As they talked, Two Rivers musher Aliy Zirkle woke up from a nap and walked over to her dog team.

When asked about her run to Iditarod, she responded with a high-pitched voice, as if speaking for her dogs, about how the race was unfolding: “We thought we were the only dogs in the race, what happened? All these teams came in and left."

Zirkle and her 14 dogs pulled into Iditarod at 1:38 a.m. Thursday for their 24-hour mandatory stop. They beat everyone to the checkpoint here, but not without issues.

Most mushers take their daylong break earlier on the trail. Zirkle is one of just two mushers who pushed all the way to Iditarod this year. Zirkle said she knew it was a risk, but she didn’t have the fastest team going into McGrath, so she “kind of had to try something.”

She traditionally takes her 24-hour stop in Takotna, back at Mile 329, she said. She had 140 pounds of dog food waiting for her there.

“It sounded like the conservative way, Aliy way, to go,” Zirkle said. “I would have been, what, like fourth or fifth into Takotna probably — I can’t remember now, it was a million years ago — and I would have been fourth or fifth going out of Takotna. Not that fourth and fifth is bad, but this was a little bit more of a gamble and it was an adventure.”

At best, Zirkle will be in third place when she leaves Iditarod; at worst, Royer, Kaiser and a half-dozen other mushers could leave before her. Zirkle can’t go until early Friday morning.

As of 7:30 p.m. Thursday, only Leifseth Ulsom and Nic Petit — last year’s winner and runner-up, respectively — were on the trail to the next checkpoint: Shageluk, 55 miles away.

Petit, who took his 24 hours in Ophir, wasted no time in Iditarod, stopping only long enough to check in and check out. He was back on the trail at 12:22 p.m. with a full team of 14 dogs, but according to the race’s GPS tracker he stopped about 10 miles away from the checkpoint for a long rest of about five hours. While he was resting, Leifseth Ulsom passed him.

Leifseth Ulsom spent about four hours in Iditarod before leaving at 4:52 p.m. He left behind one dog — Olive, a leader from his championship team a year ago — and is down to 11 dogs.

Olive got hurt in the tussocks, Leifseth Ulsom said. He thinks she pulled a muscle in her shoulder. He had previously sent home 6-year-old Jompa and 6-year-old Suggen.

“They all finished with me last year. So that’s a really big bummer,” he said. “They were really important dogs.”

Leifseth Ulsom described the trail into Iditarod as the worst he had ever seen. He was fixing his brake before leaving the checkpoint. The bumpy trail rattled the bolts loose.

Zirkle had a rough ride all the way from Takotna.

She said her team slogged through about 6 inches of fresh powder out of Takotna and broke trail out of Ophir. Then they got into tussocks and lost their way in a sea of trail markers. In the dark, she said, she couldn’t tell which markers were for the race and which weren’t.

“I was doing circles actually,” she said. “I wasn’t entirely sure which way to go.”

Eventually, she saw a light about a mile or two away. It was coming from the checkpoint. She headed that way, but not before crashing her sled.

As the first musher to reach the halfway point, Zirkle had her choice of either $3,000 in gold nuggets or an iPhone with a year’s worth of service. She picked the gold, she said, because she wanted to split the prize with her husband, Allen Moore.

Zirkle, a three-time Iditarod runner-up, still doesn’t know if a 24-hour layover in Iditarod was the right call.

“If I’m way behind them now, then it was a very poor choice, which it might be,” she said. “If I’m the same as I was going into McGrath then it was, eh, a wash, and obviously I’m not ahead of them so it’s not a boom, but it’s not a bust yet.”