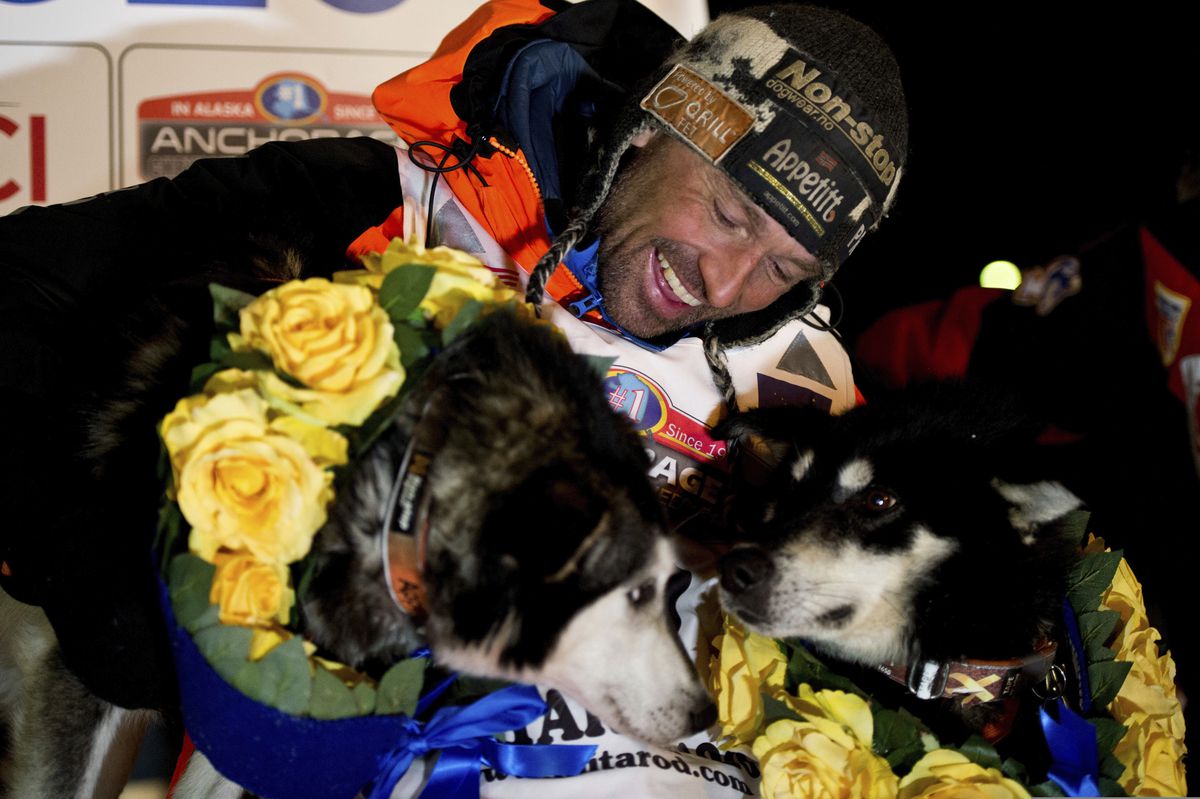 A mid-race romance in the 2014 Iditarod Trail Sled Dog Race led to victory six years later for a sled dog who got his start early one morning in the small Yukon River village of Ruby.

Bark, the product of an unexpected mating between two dogs in the 2014 race, is the co-winner of the Lolly Medley Golden Harness Award, presented each year to an outstanding lead dog or dogs.

This year’s award is shared by Bark and K2, co-leaders of Thomas Waerner’s victorious team. Named after the late Lolly Medley, a harness maker and one of the first women to run the Iditarod, the Golden Harness Award usually — but not always — goes to the champion’s top dog.

This year, Bark and K2 guided Waerner’s team through deep snow to gain an edge in the 1,000-mile race. Waerner won in 9 days, 10 hours, 37 minutes, 47 seconds, reaching the Nome finish line about six hours ahead of runner-up Mitch Seavey, a three-time champ from Seward.

Moments after winning the race, Waerner said he thought his chances of victory were good when he saw lots of snow was in the forecast.

“I knew my dogs were really good in tough conditions,” he said.

He went on to tell Bark’s origin story.

In 2014, Waerner loaned some dogs to Robert Sorlie, a fellow Norwegian who won the Iditarod in 2003 and 2005. One of the loaner dogs was Kelly, who went into heat right about when Sorlie reached Ruby.

Sorlie took his mandatory eight-hour Yukon River layover in Ruby, but eight hours stretched to about 8 1/2 when Kelly and one of Sorlie’s dogs “had a little fun,” as Waerner put it.

“And that’s actually Bark, so he was made in Ruby,” Waerner said.

K2 was born and bred in Norway but has strong Alaska roots. He came from a dog Waerner bought in 2007 from Interior musher Ramy Brooks.

“He had something great about him as a pup,” Waerner said of K2, described as smart and almost analytical.

Bark, he said, “is more like an old Viking,” willing to take on any challenge. Together the two were a winning combination.

Waerner finished the Iditarod with 10 dogs in harness, and they impressed him with their ability to pick up their pace near the end of the race.

“The dogs are incredible athletes,” he said. “It’s amazing how they can perform. And they were happy.”

This is the first time since 2011 that two dogs have shared the Golden Harness Award. Nine years ago, Velvet and Snickers were the co-winners for leading John Baker to victory.

Since the award was first presented in 1976, there have been co-winners 11 times.