Murkowski on DeVos: 'This nomination is very difficult for me' 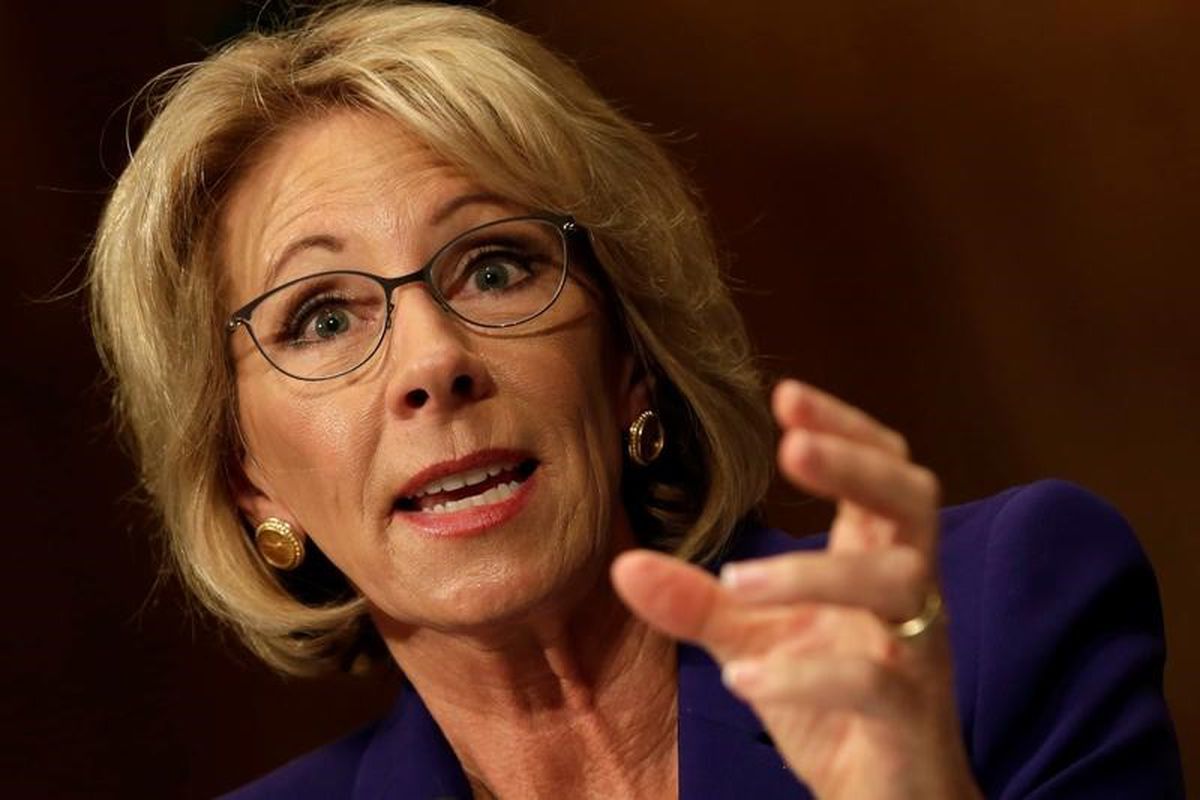 Betsy DeVos testifies before the Senate Health, Education and Labor Committee confirmation hearing to be next Secretary of Education on Capitol Hill in Washington. (Yuri Gripas / REUTERS)

Betsy DeVos testifies before the Senate Health, Education and Labor Committee confirmation hearing to be next Secretary of Education on Capitol Hill in Washington. (Yuri Gripas / REUTERS)

WASHINGTON — Alaska Republican Sen. Lisa Murkowski voted Tuesday to move Betsy DeVos' nomination to be education secretary to a vote of the full Senate but said the billionaire school-choice advocate shouldn't yet count on her for another yes vote.

The Health, Education, Labor & Pensions Committee passed DeVos' nomination by a vote of 12-11, after prolonged partisan disagreement over committee rules about a proxy vote. Murkowski and Sen. Susan Collins, R-Maine, both said they would vote for the nomination in committee but were not certain to vote for confirmation.

Citizens opposed to DeVos have waged a widespread campaign to upend her nomination, including protests and calling lawmakers in likely unprecedented numbers. Murkowski's office has been overwhelmed with Alaskans and others from the Lower 48 calling, writing and visiting — pushing her to oppose DeVos' nomination.

Galvin said she and other members of the nonpartisan coalition planned to keep fighting against the nomination of DeVos as a "supremely unqualified" cabinet member and a threat to public education.

"This is a marathon and we're in it for the long haul. We can't tell our kids we gave up because of just one vote," Galvin said.

The senator made clear Tuesday that she has not made a final decision on the matter.

Murkowski said she would vote "yes" on Tuesday because she wanted the rest of her Senate colleagues to have the chance to vote on DeVos' nomination, and to give broad deference to the president's selection, as she has done with past administrations.

"But do know that she has not yet earned my full support, and when each of us have the opportunity to vote, aye or nay on the floor, I would not advise that she yet count on my vote," Murkowski said at the committee meeting.

"This nomination is very difficult for me," Murkowski said.

But the senator is not sold.

She said Monday that she felt DeVos was trying to understand her perspective. And "I absolutely believe that Betsy DeVos cares deeply for kids," Murkowski said Tuesday.

"And I think we all recognize that a woman of her position could choose to do many many things with her time her energy and her considerable resources, and I admire her for choosing to spend them on children to be able to access a better education when she could have really chosen to do anything."

But Murkowski said she had to recognize the "thousands" of Alaskans who have gotten in touch with her to oppose DeVos' nomination. Their "concern centers on Mrs. DeVos' lack of experience with public education and the lack of knowledge that she portrayed at her confirmation hearing," Murkowski said. "They're not satisfied that she would uphold federal civil rights laws in schools that receive federal funds. They question her commitment to students with disability rights.

"So I continue to have concerns and I think that Mrs. DeVos has much to learn about our nation's public schools, how they work and what challenges they face. And I have serious concerns about our nominee to be secretary of education who's been so involved in one side of the equation, so immersed in the push for vouchers that she may be unaware of what is broken in our public schools or how to fix it," Murkowski said.

Already, opponents of DeVos are urging their followers to make more calls to Murkowski's office, which has been overwhelmed with tens of thousands of voicemails a week, in addition to answered calls, emails, personal visits and petitions.

It is unclear when the Senate will take up DeVos' nomination, but Murkowski's and Collins' votes will be crucial. Republicans have a 52-48 majority in the Senate, and nominees require 51 votes for passage.