Do you smoke? Work for an oil company? Care about crime? Alaska lawmakers just passed bills that could affect you. 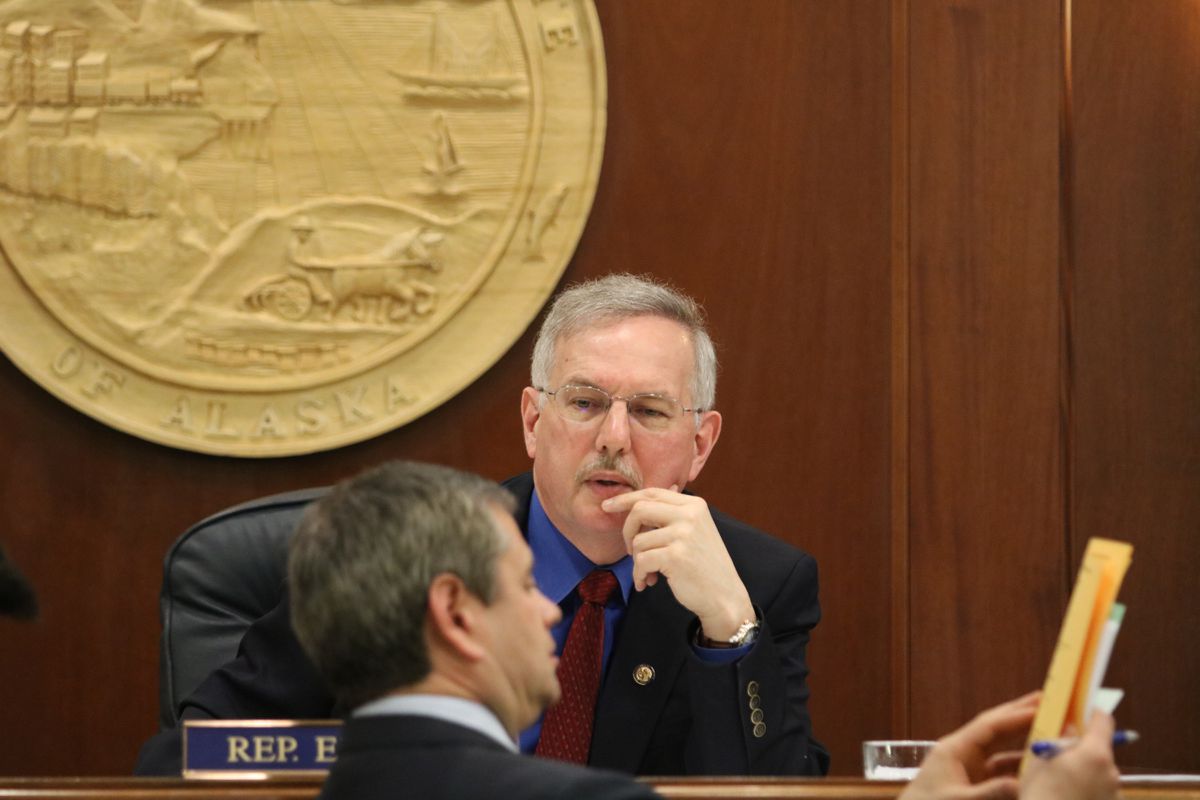 JUNEAU — Alaska lawmakers late Saturday appeared on track to gavel out of their annual session, which would be the first time in four years that they've finished with their work before June.

In the process, they've passed an array of bills over the past few days, tackling subjects that range from crime to smoking, government ethics, oil policy and state budgets.

A committee of House and Senate leaders announced a deal Thursday on the state's annual budget, which is $5.4 billion in unrestricted state general funds and $10.4 billion when federal cash is included. The two chambers both voted to approve the measure late Saturday, with each one, crucially, reaching a three-fourths majority threshold needed to spend money from the state's primary savings account, the Constitutional Budget Reserve.

The agreement settles an array of differences between competing spending proposals advanced by the House's largely-Democratic majority caucus, which generally favors higher spending levels, and the Senate's mostly-Republican majority.

The deal gives the state university system a $10 million increase, or about 3 percent, from the current year, a figure that's between the two numbers approved by the House and Senate.

It includes many of the new public safety jobs that Gov. Bill Walker's administration wants to create, including positions for prosecutors, sex crime investigators and an aircraft pilot.

It pays for 20 new positions in the state health department to help tackle a backlog of applications for assistance programs like Medicaid and food stamps. That move follows a scathing report released Monday that said the department isn't complying with state law that requires it to process applications within a certain amount of time.

The deal rejects a request by Walker's administration involving the state-owned corporation charged with developing the proposed 800-mile natural gas pipeline from the North Slope.

Walker's administration asked legislators for power to spend money that the corporation raises from outside investors, if it can find any to put up the cash. But Senate majority members said they were skeptical about ceding control of the project to unidentified investors.

[Related: Alaska's gas line corporation wants to raise cash from outside investors. Not so fast, says the state Senate.]

Lawmakers did allow the corporation to transfer $12 million between two different accounts, as it requested, and its chief executive, Keith Meyer, issued a prepared statement saying the corporation would continue to advance the project.

The House Finance Committee, meanwhile, unveiled its initial draft of a $1.5 billion capital budget, $280 million of which is unrestricted state general funds.

Among the most controversial items is $25 million for a pair of proposed state megaprojects previously thought to be defunct: the bridge from Anchorage across the Knik Arm and the plan to extend Juneau's roads closer to the rest of the nation's road system.

Walker announced in 2016 that he was shutting down work on the billion-dollar Knik Arm bridge and the $600 million Juneau Access project. Much of the cash for those projects could have come from the federal government, but the state would be responsible for maintenance and Walker said the projects didn't make sense given the state's huge deficit.

Backers of the projects, both inside and outside the Legislature, haven't stopped pushing for them. Supporters of the Juneau road project have been running radio ads and recently commissioned a poll.

A spokesman for Walker wouldn't say if the governor will veto the money for the projects. But he said that as long as the state remains in a deficit, it will be difficult to advance them.

The House Finance Committee's draft capital budget was still stuck in the committee Saturday evening. Members were expected to unveil a new version before the end of the night that incorporates multiple amendments, before sending the spending bill to the floor.

The Senate then must agree on any House changes to their draft of the plan before sending it to Walker's desk.

Among the amendments expected to be considered in the Saturday evening version of the spending bill:

• Adding $20 million, or slightly less than 2 percent, to spending on Alaska's public schools. The increase would be a one-time grant, and slightly less than the permanent, $100 boost to the state's per-student spending formula that many House majority members have pushed. But a separate bill already passed by the Legislature allows for a $30 million increase the following year.

[Related: Here's what flat funding has meant for Alaska's schools]

• $48 million to keep the Medicaid health care program for the poor and disabled from running out of cash before the end of the state's fiscal year June 30. Walker's administration has been warning that it faces a shortfall and that without the cash, it would have to stop making payments to doctors, hospitals and other organizations until the next fiscal year starts July 1.

• $7 million for maintenance, renovation and repairs at the state university system.

• $20 million to help pay for reconstruction of Anchorage's port.

Smoking ban finally gets a vote

The House, after a two-year wait, passed legislation Saturday to establish a statewide workplace smoking ban, which will include places like offices and bars. The vote was 32-7.

Senate Bill 63, sponsored by Soldotna Republican Sen. Peter Micciche, had been stuck in a committee chaired by Anchorage Republican Rep. Gabrielle LeDoux for more than three months. LeDoux also blocked a similar bill at the end of the 2016 legislative session, defying a grass-roots advocacy campaign.

State law already makes smoking illegal at schools, public meeting rooms, health care buildings and elevators. Nearly a dozen cities and towns also have their own workplace smoking bans, according to the state Department of Environmental Conservation. Those include Anchorage, Juneau and Palmer — though not Fairbanks, Kodiak nor Sitka.

SB 63, if Walker signs it, would make the ban effective statewide. Walker tweeted his support for the bill late Saturday.

The state Senate on Thursday unanimously passed a wide-ranging, rewritten House bill aimed at responding to Alaskans' recent outcry over rising crime, particularly in Anchorage. The House approved the rewrite in its own vote Friday.

House Bill 312, originally sponsored by Anchorage Democratic Rep. Matt Claman, started as a narrow proposal to make it easier for police to arrest people accused of assaulting medical workers — and to toughen penalties.

Before passing it, a Senate committee opened up the legislation and crammed in three other crime-fighting ideas that previously were standalone bills sponsored by Walker.

One would give the attorney general authority to restrict new types of illicit drugs — a step that otherwise requires legislative action. Another boosts fees paid by people convicted of crimes.

The third bill was a high-profile proposal to fix what Walker's administration says is a loophole opened by the 2016 criminal justice overhaul law, Senate Bill 91.

That bill forced judges to release certain suspects from jail while they await trial, even if they have long out-of-state criminal records. Walker's proposal, which was included in HB 312, will change the state system for setting bail so that it accounts for out-of-state criminal history.

During the Senate's floor debate Thursday, members also approved an amendment to undo other provisions of SB 91, with the effect of giving judges more flexibility to hold in jail, before trial, people who are accused of certain crimes.

The Senate on Friday passed Walker's proposal to allow the state to borrow hundreds of millions of dollars to pay cash tax credits that Alaska owes to oil companies.

The legislation, House Bill 331, now heads to Walker's desk for his signature.

The bill aimed to clear a nearly $1 billion tax credit liability from the state's books. That debt had cropped up as oil companies spent money looking for oil and developing projects, which entitled them to partial cash reimbursement from the state.

State lawmakers paid more than $500 million a year at the program's peak, until the onset of Alaska's budget crisis in 2014. But when that crisis developed — in large part because of a crash in the price of oil — the state found itself owing, in credits, an amount expected to be more than half of its annual oil-related revenue.

The state has since phased out nearly all of its cash tax credit programs. But there's still about $800 million in credits claimed by companies that the state hasn't paid, which, the oil industry argues, is thwarting investment and stopping companies from hiring Alaskans.

HB 331 allows Alaska to issue bonds to pay off the companies all at once, with the state gradually paying back the bonds over time.

The House on Friday approved government ethics legislation that's similar to a citizens initiative that was set to appear on the November ballot.

The bill, House Bill 44, was rewritten by Senate majority members to mirror language in the initiative; the Alaska Constitution says an initiative is void if the Legislature adopts a "substantially" similar measure.

The initiative bans "foreign-influenced" corporations from spending money on Alaska's elections for individual candidates, they said in a prepared statement.

HB 44 restricts that spending only to the extent required by federal law, they said. Federal law has no restrictions on spending by foreign-influenced corporations, so that provision of the bill "has no effect," they said.

The Senate's version also weakens a requirement in the initiative that legislators' foreign travel "benefit the state," saying instead that it must have, simply, a "legislative purpose," the two legislators said. Multiple majority senators have taken trips to foreign countries in recent years, including Kodiak Republican Gary Stevens and Bethel Democrat Lyman Hoffman.

State law tasks the lieutenant governor — who supervises elections — and the attorney general with deciding whether a bill and initiative are substantially similar.