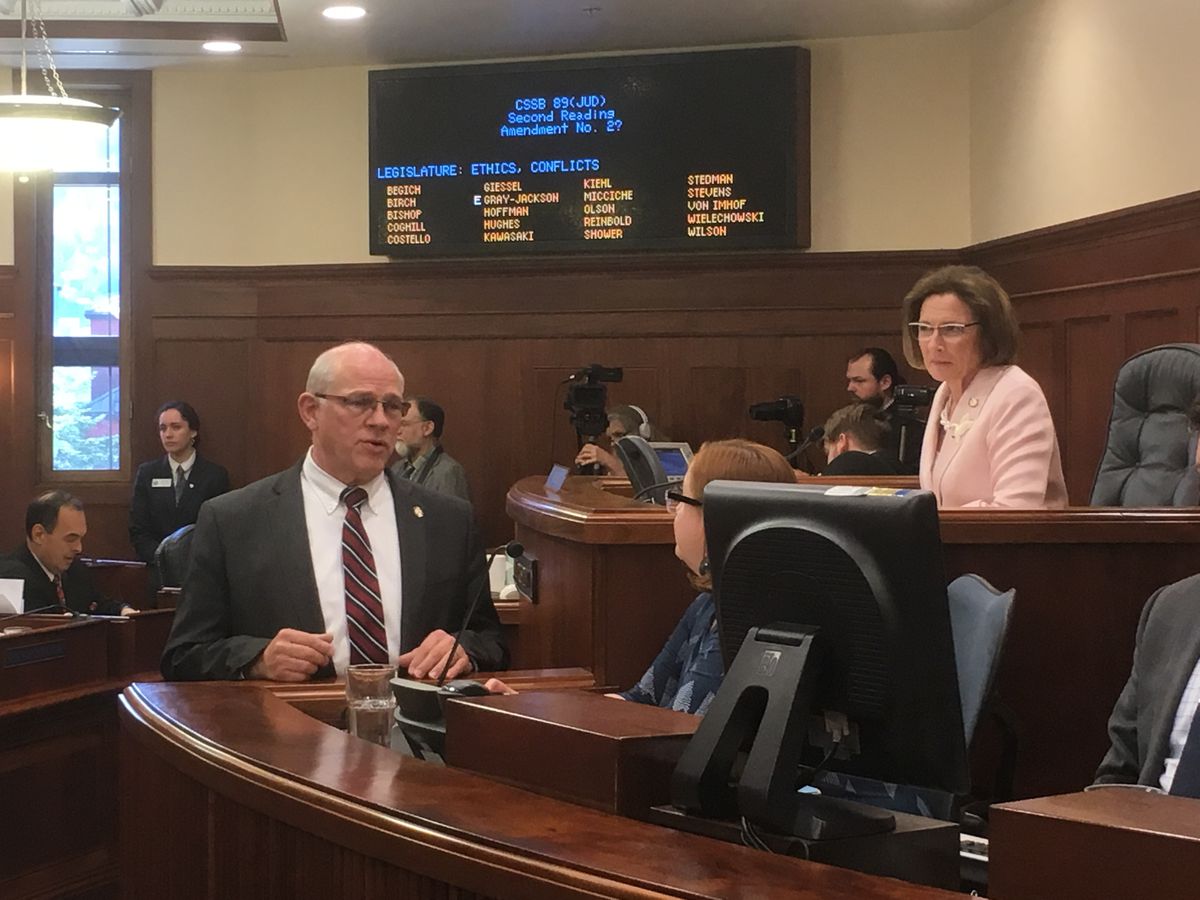 Sen. John Coghill, R-North Pole, and Senate President Cathy Giessel, R-Anchorage, are seen during a break ahead of a vote on an amendment to Senate Bill 89 Wednesday, March 27, 2019 in the Alaska Capitol. Coghill was the prime sponsor of the bill, which would roll back a portion of ethics legislation passed by lawmakers last year. (James Brooks / ADN)

Sen. John Coghill, R-North Pole, and Senate President Cathy Giessel, R-Anchorage, are seen during a break ahead of a vote on an amendment to Senate Bill 89 Wednesday, March 27, 2019 in the Alaska Capitol. Coghill was the prime sponsor of the bill, which would roll back a portion of ethics legislation passed by lawmakers last year. (James Brooks / ADN)

JUNEAU — The Alaska Senate has voted to roll back portions of a legislative ethics law it approved last year.

Senate Bill 89, approved 15-4 Wednesday, repeals a portion of last year’s House Bill 44. That measure, introduced at the urging of former Rep. Jason Grenn, I-Anchorage, strengthened the Legislature’s conflict-of-interest guidelines and changed the rules for foreign campaign contributions, lobbyist dinner gifts and the ability of lawmakers to accept per diem expense payments in a longer legislative session.

After the bill was passed, lawmakers found this year that its implementation made legislative work much more difficult.

“Once this portion got interpreted to us, it was unworkable,” said Senate Rules Committee chairman John Coghill, R-North Pole and the bill’s sponsor, shortly before the vote.

That means a legislator like Sen. Mia Costello, R-Anchorage, whose husband is a commercial cargo pilot, can’t discuss aviation legislation in private with her constituents. Speaking on the Senate floor, she said that is a problem for her, one of the two lawmakers representing Ted Stevens International Airport and Lake Hood floatplane base.

“I need to be able to talk about aviation,” she said. “I believe the corrections we’re making here allow the public to be represented.”

The bill had been proposed as a ballot measure, but because lawmakers approved it as a law, they are able to alter it. If it had been passed as a measure, lawmakers would have been forbidden from repealing it for two years.

SB 89 now goes to the House for consideration. If approved there and signed into law by the governor, it would roll back the portions of the ethics reform law that cover conflicts of interest. The remaining portions of the law — those covering foreign contributions, per diem and meals with lobbyists — would remain on the books.

The only “no” votes Wednesday in the Senate came from four members of the Senate’s Democratic minority.

Senate Minority Leader Tom Begich, D-Anchorage, dissented from that group and voted in favor of the bill. Under the ethics laws, Begich is restricted from discussing education legislation because his wife is executive director of the Coalition for Education Equity.

In separate action Monday, the Senate voted 19-0 to reauthorize the Alaska Vaccine Assessment Program, which had been scheduled to expire in 2021.

The program, created in 2014, allows the state to buy vaccines in bulk and distribute them to health care providers. The program is funded by a fee levied on some healthcare services.

“Alaska’s immunization program is an innovative public-private partnership that ensures Alaskans a healthier future at the lowest possible cost,” Senate President Cathy Giessel, R-Anchorage and the bill’s sponsor, said in a prepared statement. “The department reduces vaccine-preventable diseases, and providers have improved health outcomes for their patients and easier vaccine stock management. The insurers pay less to vaccinate individuals, and we all save more money in the long-run due to decreased medical costs from vaccine-preventable diseases.”

Senate Bill 37, which passed the Senate as a measles epidemic spreads across the United States, now goes to the House for consideration.

Both men were state troopers shot and killed in 2014 while responding to an emergency in Tanana.

The naming is not yet official. The legislation naming the bridges, House Bill 34 and House Bill 88, respectively await Senate approval. Rep. David Talerico, R-Healy, wrote each.

Correction: An earlier version of this article misstated the bill number for the vaccine assessment program renewal. It is Senate Bill 37, not 89.