SPONSORED: From theories to folklore, discover how stockings came to be “hung by the chimney with care” Learn the origins behind this beloved holiday tradition, and spread a little cheer in your community this season.

“The stockings were hung by the chimney with care, in hopes that St. Nicholas soon would be there,” the iconic line from Clement Clarke Moore’s “A Visit From St. Nicholas,” more commonly known as " ‘Twas the Night Before Christmas,” paints a vision of a popular holiday vignette and tradition.

The poem, originally published anonymously on Dec. 23, 1823, is cited as the first written mention of Christmas stockings. It’s notable because the origin story of how we came to display stockings on our mantles - and subsequently pack them with presents - has no clear single source. Historians simply can’t agree on where the tradition started, largely because there is little written that has survived the passage of time.

There are, however, a few theories, as well as similar traditions worldwide:

According to Gerry Bowler, a history professor at the University of Manitoba and author of “Santa Claus: A Biography,” the tradition began roughly 900 years ago.

“Starting in, we believe, the 1100s, nuns spread the notion of a magical night visitor who comes and leaves gifts for children,” Bowler said in a YouTube video made for the University in 2010.

That visitor, you may have guessed, was Saint Nicholas, the inspiration for Santa Claus. However, the presents wouldn’t have been left on Christmas Eve - like we know today - but rather on the eve of the Feast of Saint Nicholas, celebrated on December 6 in most western European countries.

As Bowler explained, kids were encouraged to leave out their shoes so that little gifts would be left inside.

“So the shoe precedes the stocking as the receptacle for either gifts, toys, fruits, candies, that kind of thing, or something bad, if the kid has been bad,” Bowler said, adding that the undesirable leavings included coal, sticks, sawdust, oats and manure.

But, how the tradition evolved from leaving shoes outside to hanging socks - and later, oversized elaborately decorated socks often bearing the name or initials of the giftee - by the fire isn’t clear.

The most pervasive story is of a poor widower who worried that his three daughters would never be able to marry. Because there were no funds for their dowries, they were destined for spinsterhood.

Saint Nicholas heard of the family’s plight and, knowing that the father was too proud to accept charity, found a way to sneak the girls some gold coins.

In some versions, the former monk Nicholas shimmies down the chimney to deposit the gold in their drying stockings. In others, he’s caught lobbing the coins down the chute or through a window. There are even some iterations that claim he left three gold balls in each girl’s stocking, which is why, in some cultures, oranges are left in stockings to this day. There is one common element in every variation: the girls live happily ever after.

It’s also possible that the tradition stems from Norse mythology, specifically a tale relating to Odin, one of the principal gods. As the folklore goes, children would put carrots and sugar in their boots to leave out for Odin’s flying horse, Sleipnir, to snack on during the pagan Yule celebration - usually around Winter Solstice. In turn, Odin would pay back their kindness with gifts and candy.

It’s thought that elements of this Norse mythology have influenced the stories we tell today during the holidays. For instance, Odin’s eight-legged, airborne horse may be the inspiration for Santa’s eight reindeer. The carrots and sugar left out could be why children today leave out a plate of cookies and a glass of milk before they go to bed on December 24.

Stories Around the World

Aside from the ritual Moore wrote about, the tradition of receiving gifts from a magical man or creature in December has variations around the world:

In Holland, children leave wooden clogs by the fire, usually filled with straw. A man named Sinterklaas and his assistant Zwart Piet (Black Pete) land in port cities by boat and ride through town on a white horse and a mule under the cover of darkness to trade the grains for gifts. Similarly, in France, children put carrots in their shoes and leave them by the fire for Père Noël’s donkey. When they wake up, they find their footwear has been filled with candy and money.

In Ecuador, kids put their wish lists inside their shoes and Papa Noel brings new shoes, along with the gifts requested.

In Puerto Rico, tots put freshly cut grass in boxes underneath their beds on December 5. The belief is that the three wise men come in and take the food to feed their camels while leaving a small gift behind.

In Iceland, shoes are left on the windowsill for 13 nights. Each night, a different elf comes to leave them something.

Whatever the reason, stockings have remained a beloved holiday tradition and a way to spread joy.

This season, as decorations go up and stockings are hung around the house, there are many ways to share the tradition within your community. Local toy drives, including Denali Family Services and Catholic Social Services, in partnership with Anchorage Daily News’ Operation: Stocking Stuffer drive, are a great way to spread holiday merriment to local families. 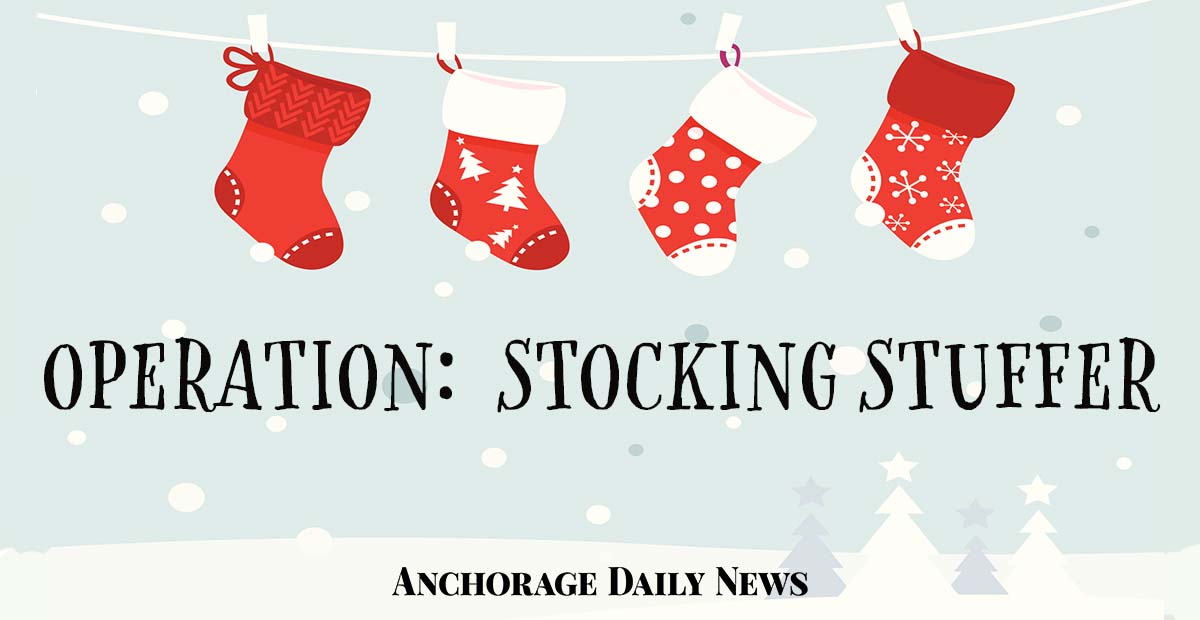