SPONSORED: Big Ray’s creativity and commitment to Alaska are key to the company’s success.

For 75 years, Big Ray’s has done whatever it takes to bring Alaskans the best outdoor gear on the market, embracing creativity along the way.

In the 1980s, the local outfitter devoted an entire section of its catalog to serving the state’s most remote communities. Later, Big Ray’s created an entire line of snowsuits tough enough for Alaska’s kids.

“That’s just part of being an Alaska business,” said Big Ray’s owner Jessica Rostad. “This state is so unique.”

For Big Ray’s, providing quality outerwear is about more than business – it’s about serving Alaska’s way of life and protecting those who work and play in the rugged outdoors. After 75 years, Big Ray’s thrives today thanks to its commitment to Alaska’s communities.

How Big Ray’s got its name

In 1947 two WWII veterans, Glenn Miller and Howard Cruver, began selling military surplus supplies out of the back of a car. Soon they opened an Army-Navy Surplus store on Fourth Avenue in downtown Anchorage, selling everyday goods like cutlery, socks, and jackets.

In the 1950s, owners decided to expand to Fairbanks. They asked their friend Milan Raykovich, who stood 6-feet, 7-inches tall, to run the Interior shop, and said they’d name the store “Big Ray’s” after him.

Raykovich was an alumnus of the Alaska Agriculture College and School of mines, later known as the University of Alaska, Fairbanks. He agreed to run the store. In 1957, he struck rich with oil investments and left the company. But the name Big Ray’s stuck around.

When Big Ray’s founder Cruver grew ill and passed away, his brother, Dick Cruver, stepped in to help run the store.

Today, Big Ray’s has five locations: Two in Anchorage, two in Fairbanks, and one in Kodiak. The original Fourth Avenue store is still open today, with the original Army Navy sign still proudly mounted outside.

A mail-order catalog made for rural Alaska

In the 1950s, Big Ray’s started a mail-order catalog which quickly became a lifeline for Alaskans living off the road system.

“For many people in these communities that was their only source of getting clothing and winter wear,” Rostad said.

The first catalog was a single page and had 2,000 printed copies. A few decades later, at its peak, the catalog reached nearly every Alaskan’s mailbox.

But for some remote Alaskans, finding the right fit through mail order was challenging.

“They would draw pictures of their hands and feet because they couldn’t figure out what size gear they should order,” said former owner Mark Cruver.

In the 1980′s, the company added a whole section to the catalog in order to help rural Alaskans find the best fit. Customers could trace an outline of their foot, rip the page from the catalog, and send it to the store.

“Via mail, we’d be able to pick out a boot for them,” Rostad said.

Today, Big Ray’s mail-order catalog remains an impactful part of the company’s seasonal outreach and is delivered to all mailboxes in rural communities across Alaska.

In-house outfitting: ‘That really put us on the map’

In 1975 the construction of the Alyeska Pipeline was in full swing. Alaska’s economy was booming, and so was Big Ray’s. Yet as the pipeline era faded, the company needed to pivot in order to survive.

“We were really under a great deal of pressure,” said owner Monty Rostad.

“That really put us on the map,” Jessica Rostad said.

Alaska was in an economic downturn in the late 1980s. Meanwhile, national sporting goods franchises were moving in, threatening the livelihood of local businesses like Big Ray’s.

In the 1990s, a woman from Delta Junction came into the Fairbanks store and purchased four snowsuits for her two children. The suits weren’t warm enough, she explained, so her children wore two — one layered on top of the other.

“This started to percolate in my mind,” Monty Rostad said.

Having the right clothing in Alaska is “life or death, pretty much,” said Fairbanks Store Manager Steve Johnson. At the very least, it’s the difference between “being miserable or having fun.”

Realizing there was no gear on the market warm enough for Alaska’s kids, Rostad decided Big Ray’s would design its own. In 1998, the company released Activ8. Developed to be the warmest outdoor gear on the planet, the line is sold exclusively through Big Ray’s.

The company went on to create an adult clothing line of premier outerwear known as Kavik. After the success of Kavik and Activ8, they expanded into custom fly-fishing gear fit for the unique needs of anglers in Alaska, and next year, Big Ray’s will be releasing a new line of fishing waders for men and women.

“We’ve developed brands that Alaskans were asking for,” Rostad said.

In 2001, Big Ray’s celebrated another success when it was honored as the largest Carhartt retailer per capita in the world. The company sold 50,000 pieces of Carhartt gear that year.

“It has been an honor to be part of the Big Ray’s family of brands for more than 70 years,” said Carhartt sales representative Kiki Haar.

In 2008 Big Ray’s expanded to Kodiak with the purchase of Mack’s Sports Shop. In 2015, all five stores were rebranded as Big Ray’s.

Jessica Rostad and Jesse Glamann became the newest owners in 2019. Glamann lives in Kodiak, a world-class hunting and fishing destination. Glamann’s own experience in Alaska’s unforgiving elements has taught him the value of having the right gear — and what to recommend.

“There isn’t a single piece of clothing that’s on me, with the exception of my wedding band, that’s not bought from the store,” he said.

Today, Big Ray’s is upgrading its online systems, and recently completed a massive renovation of its midtown Anchorage location. The new storefront has double the floor space and a new wooden interior showcasing locally-sourced timber.

“We wanted to keep it as local as possible,” Rostad said. “That’s very important to us.”

More renovations are underway in Fairbanks and Kodiak, with the goal of “making sure our stores are exciting and shoppable,” Rostad said.

The company’s continued investment in Alaska has allowed it to adapt over the decades, and ultimately, Alaska’s community is the key to Big Ray’s success.

“To see generations continuing to shop at our stores, that is what keeps us around,” Rostad said. “We’re proud to be part of Alaska’s history.”

Big Ray’s celebrates this milestone thanks to the continued support of our customers, communities, and dedicated employees. We’re proud to be part of Alaska’s history and look forward to another 75 years. 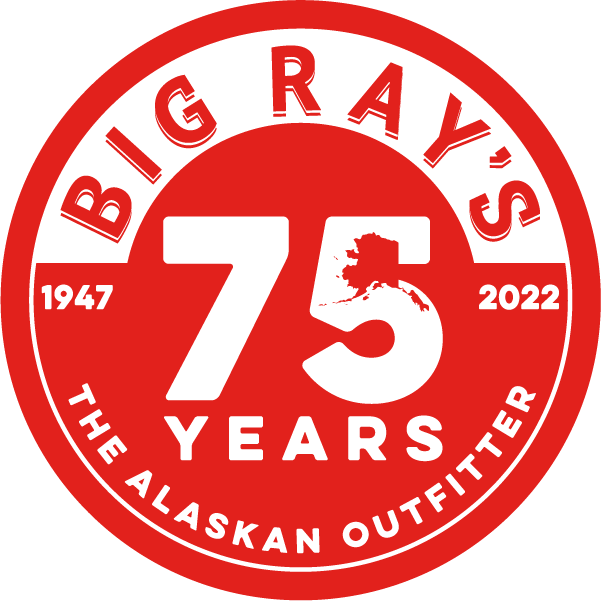 This article was produced by the sponsored content department of Anchorage Daily News in collaboration with Big Ray’s. The ADN newsroom was not involved in its production.