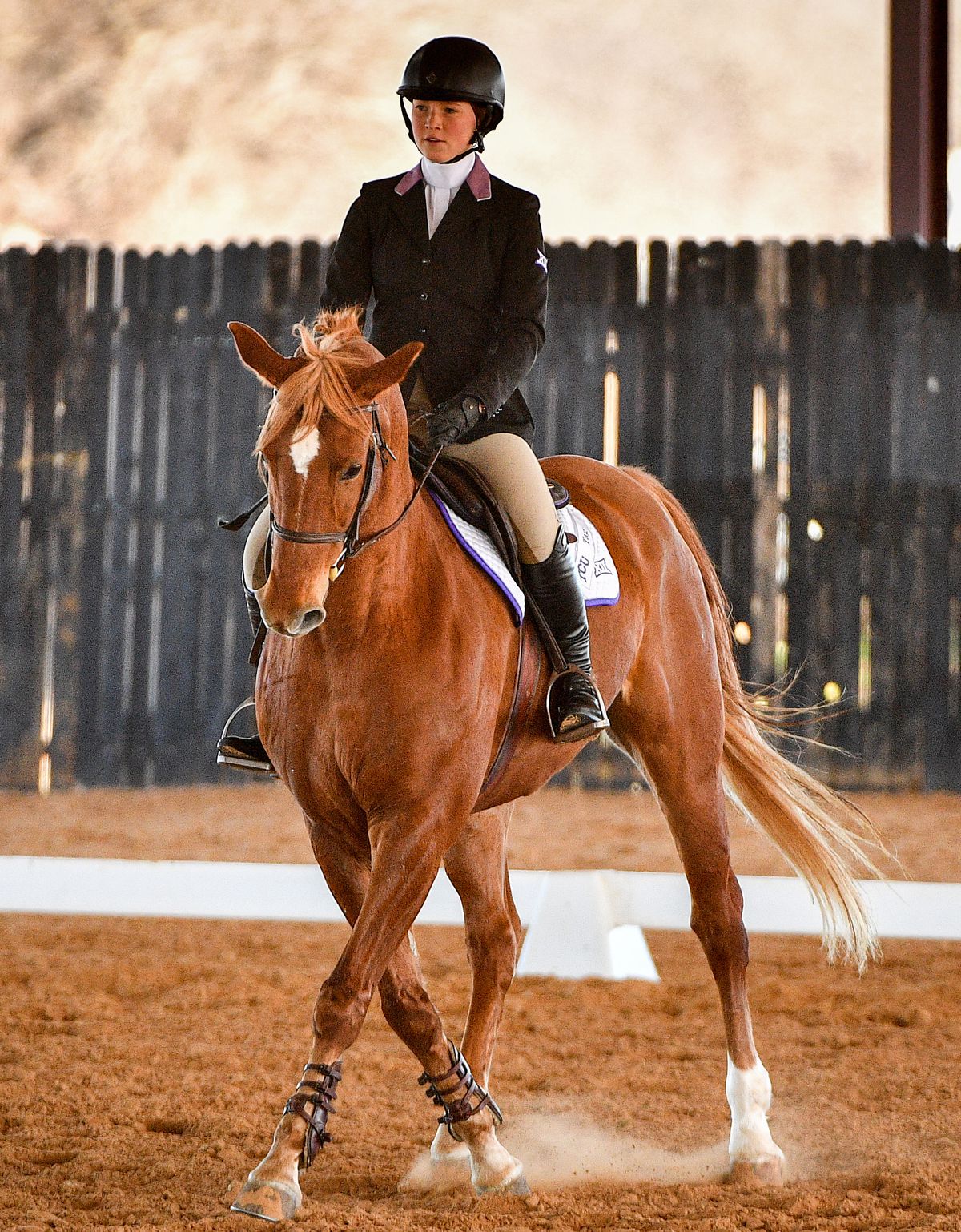 Anchorage’s Kari Hancock competes for TCU in a home meet against Baylor earlier this year at the Turning Point Ranch in Springtown, Texas. (Photo by Michael Clements)

Anchorage’s Kari Hancock competes for TCU in a home meet against Baylor earlier this year at the Turning Point Ranch in Springtown, Texas. (Photo by Michael Clements)

Kari Hancock is no dummy. She knows why she got a chance to join the equestrian team at Texas Christian University as a freshman four years ago.

"I was an academic trophy," she said.

Hancock realized as much during her senior year at South High, when she traveled to Fort Worth to interview for TCU's coveted Chancellor's Scholarship — free tuition for four years. While she was there, she met with equestrian coach Logan Florentino.

"I told her, 'You get that scholarship and you're on the team,' '' Florentino said.

Hancock got the scholarship. And she got a spot on the team, knowing she owed it as much to her GPA and test scores as to her command and composure in the saddle. Sure, the coaches saw video of Hancock winning awards at Alaska horse shows. But she was a complete unknown outside Alaska.

"I came there as a nobody," Hancock said, and with modest expectations. "… I hoped I would compete once as a senior."

When Hancock, 21, graduates in May with a degree in biochemistry, she will do so as one of TCU's top students — and one of its top athletes.

This summer she and her horse Nick — who traveled with Hancock from Anchorage to Texas — will head to California. Armed with an NCAA postgraduate scholarship and an array of other academic awards, Hancock is headed to the UC-Davis School of Veterinary Medicine.

During her freshman year at TCU, teammates were surprised to learn Hancock was from Alaska. "What did you ride on?" they would ask in amazement. "Yeah, I grew up riding moose," Hancock would tell them.

Hancock's first horse was actually a vault. The youngest of Anne and James Hancock's two daughters, she started gymnastics as a toddler, following the lead of sister Brittany.

Things were great until Hancock hit Level 6 at age 9, which is when she said she fell out of love with gymnastics.

"Level 6 is where you have to flip backward on the beam," she said. "I didn't like the idea of going backward without seeing my hands."

So she asked her mom about riding lessons. All it took was one for Hancock to fall in love with a new sport.

Sure, sometimes she got tossed in the air by a horse — but she was never flipped backward. She felt at home on a horse, where the balance and body control she learned in gymnastics helped make her a natural rider.

She was 10 years old when she got Nick, a bay thoroughbred with a black mane and tail. Together they learned how to succeed in Alaska show rings.

Florentino ticked off the qualities that make Hancock a star in the classroom — focus, drive, work ethic, discipline — and said she brought the same qualities to the barn every day of every season.

She also brought a willingness to listen and be coached.

"I knew I was low man on the totem pole and it was really up to me to decide what my future would look like," Hancock said. "So I was really dedicated to listening to my coach and doing everything she asked. The coach knew I would listen, she knew I would make corrections, she knew I would think critically about how I would ride."

Florentino, who spent three years coaching at the University of Georgia before becoming a TCU coach six years ago, said she's never seen anyone like Hancock.

Other women on the team took notice, she said. They saw how Hancock accepted feedback and how she applied it — not just once, but again and again. "She really became a leader," Florentino said.

Hancock spent the first semester of her freshman year practicing. It wasn't until the second semester that she got a chance to compete — well ahead of her initial goal to get in one meet before her college career was over.

In her debut, she was named the meet's Most Outstanding Performer.

"From then on, there was no looking back," Florentino said. "She competed for us in every meet from that day on."

She earned her first All-America honor as a sophomore and set a national record as a junior.

Hancock's event is hunt seat equitation on the flat, which requires a rider to maneuver her horse in nine set patterns using a variety of gaits. Each pattern is worth a maximum of 10 points and another 10 points are available for the rider's appearance and effectiveness. A perfect score is 100 points.

During her junior year, Hancock rode a Texas Christian horse named Carmeline to a score of 98 points to set a National Collegiate Equestrian Association regular-season record, a Big 12 record and a TCU record.

As a junior and senior, Hancock helped the Horned Frogs to their best seasons on record. In her junior year, they were the national runner-up; this year, they lost to eventual champion Texas A&M in the semifinals.

For Hancock, the success all started with that debut victory her freshman year.

"It gave me a lot of drive to push through a lot of hard times — the early morning workouts that make everyone want to puke, getting yelled at to the point where you feel like you don't know how to ride.

"It made me trust the process."

Part of the process is powering through endless days and constant aches and pains.

Hancock's typical school day began at 6 a.m. and ended at 10 p.m., with practice consuming four to five hours each day.

On her way back to campus, Hancock often stopped at the barn where she keeps Nick to practice by herself for another hour, always applying the feedback Florentino gave her during practice.

She dealt with an injury every year at TCU, including two in the last 12 months.

As a freshman, she had back pain that trainers traced to her legs, which are different lengths. As a sophomore, she dealt with a torn labrum (shoulder). As a junior, it was plantar fasciitis (inflammation across the bottom of the foot) — "A horse tried to murder me," she said.

The summer before her senior year she had a tibia fracture, and currently doctors are trying to discover the source of the tingling and numbness in her left leg.

"Pain is basically background noise to me," Hancock said. "It's tough on your body. You fall off a lot. You're working with a 1,200-pound animal and they step on your feet all the time – I've had a permanent bruise on my foot for eight years.
"I've been kicked in the gut and dumped in the dirt more times than I can count. There's a lot of wear and tear on the body trying to move a horse around."

Soon she will get a chance to recover. Hancock's equestrian days are winding down, at least for the next several years.

Hancock will take Nick to California, but the horse is 17 now, has bad knees and is retired from the show ring. Besides, Hancock doesn't expect to have much free time once she begins veterinary school.

Her plan is to earn a DVM in equine orthopedic surgery and a phD in biomedical chemistry. She wants to research cartilage regeneration so someday she can help injured horses, and Florentino, for one, has no doubt Hancock will make it all happen.

"One thing about Kari," she said. "If she has a goal she will not just meet it, she will crush it."