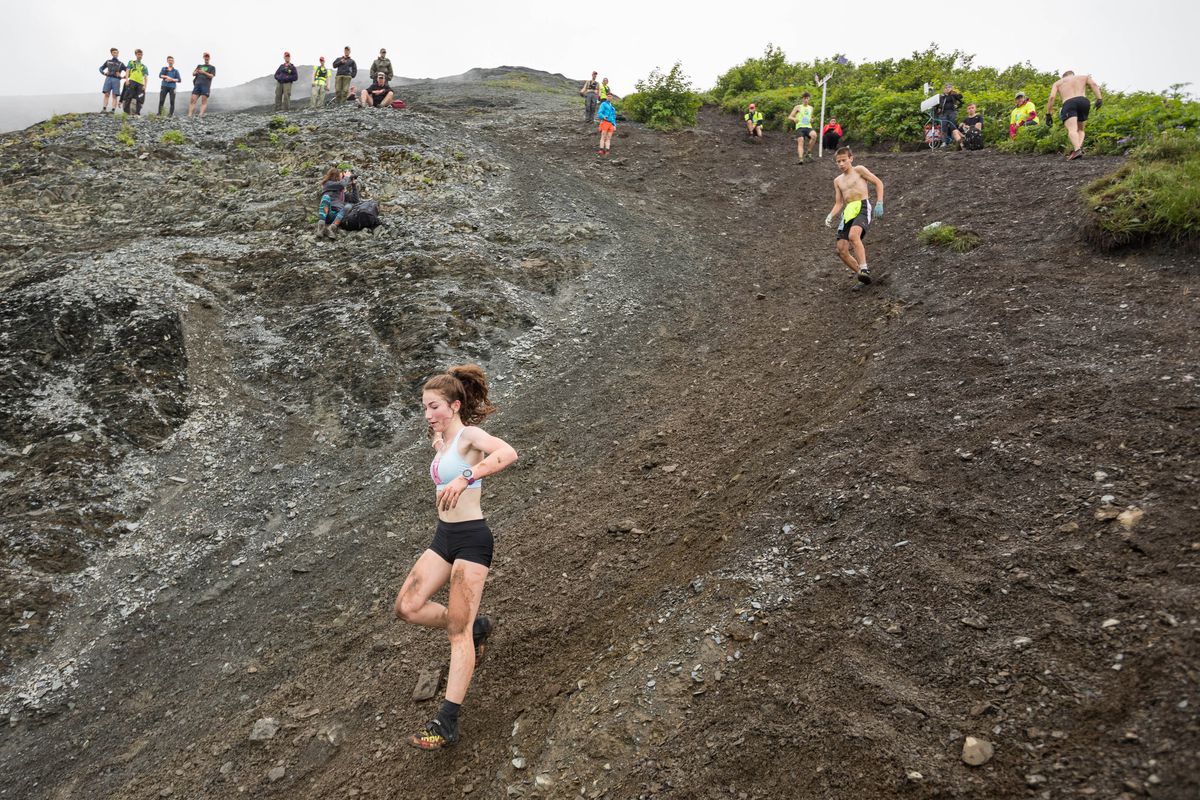 Molly Gellert runs down the mountain after rounding the halfway point. Gellert is the girl’s winner of the 2017 Mount Marathon junior’s race in Seward on Tuesday. (Loren Holmes / Alaska Dispatch News)

Molly Gellert runs down the mountain after rounding the halfway point. Gellert is the girl’s winner of the 2017 Mount Marathon junior’s race in Seward on Tuesday. (Loren Holmes / Alaska Dispatch News)

SEWARD — As Luke Jager stood in the finish corral Tuesday morning and accepted congratulations for his third straight boys title at Mount Marathon, he glanced down at third-place finisher Ali Papillon and shook his head.

"The future, man,'' said an incredulous Jager, nodding at Papillon. "Don't even get me started.''

Jager closed his junior career Tuesday — he'll age out next year and move into the men's division for runners 18 and older. Given the talent of an up-and-comer like Papillon, Jager's departure comes none too soon.

He called Papillon "the next Allie Ostrander.'' That's high praise — Ostrander, the Kenai runner who's gone on to win an NCAA steeplechase title — won six consecutive junior girls races from 2009-14.

Jager and his West High friend and teammate, Molly Gellert, 17, swept the junior titles for the second straight year.

Given slippery conditions, Jager and Gellert said they weren't too concerned with time — both knew they were unlikely to beat the personal records they established last year.

"It was super-frustrating, like bear-crawling all the way up,'' Gellert said with a smile.

Jager said any faint notion of threatening Bill Spencer's 1973 junior record of 24:30 went out the window when he saw conditions on the mountain.

"Bill Spencer's record will probably be there until I die,'' he said.

Gavin Block of Palmer finished second among boys in 29:32 and Papillon took third in 30:00, slashing 1:24 off his time from last year.

Ruby Lindquist of Moose Pass claimed second among girls in 33:55 and Kendall Kramer of Fairbanks earned third in 35:06.

The junior race takes runners halfway up the mountain course that race officials still say peaks at 3,022 feet — even though recent surveys pegged the race peak at 2,974 feet — and back into town to the finish line.

Papillon said he's been to the top of Mount Marathon 24 times since May 8 "to make the junior race seem like a piece of cake.''

Jager will race the full mountain in the senior division next year, when his rivals will likely include race record-holder David Norris and Scott Patterson, both of whom ski for APU.

"I see David and Scott every day at practice, and I talk a lot of smack,'' Jager said. "At some point, I'm going to have to live up to it.''