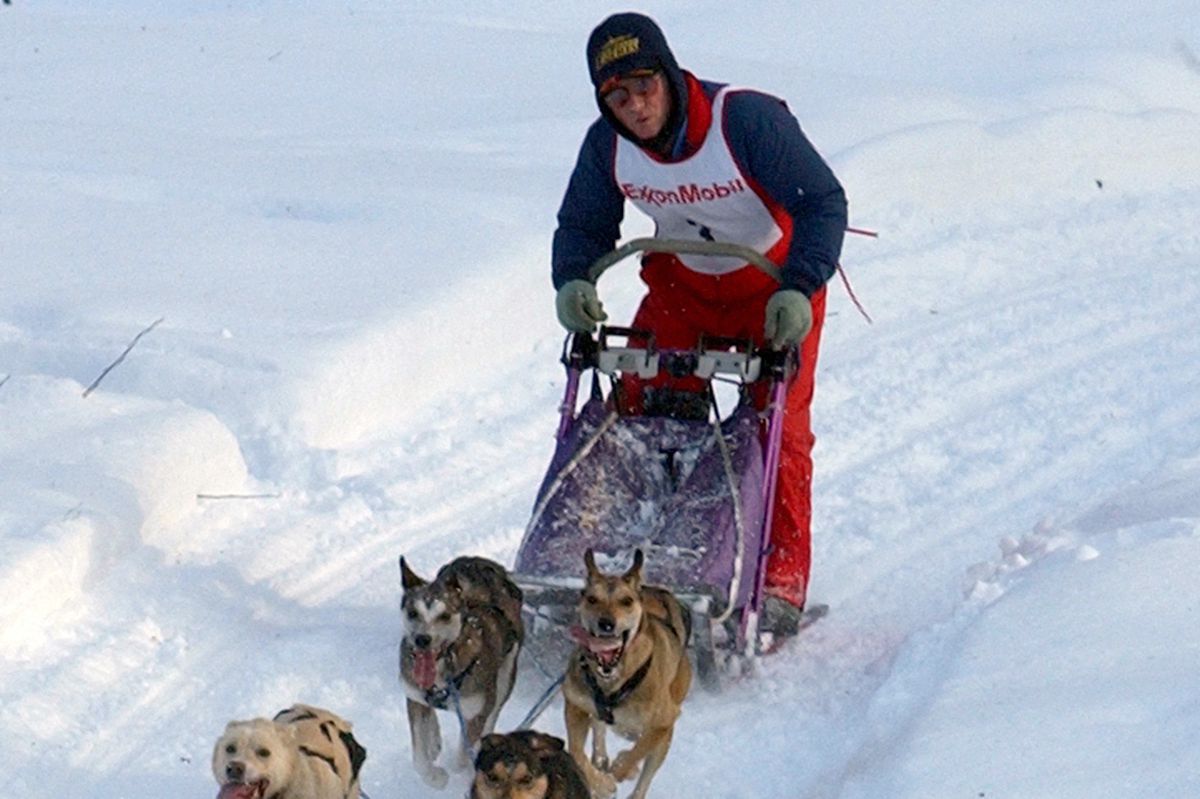 Joee Redington drove his team to a second place finish in the Exxon Mobil Open at the Tozier Track on Sunday, Feb 8, 2004. (Bill Roth / ADN archive 2004)

Joee Redington drove his team to a second place finish in the Exxon Mobil Open at the Tozier Track on Sunday, Feb 8, 2004. (Bill Roth / ADN archive 2004)

The oldest son of one of Alaska's most beloved citizens, Joee Redington Jr. made a name for himself by doing what he knew best and loved best – turning huskies into champion sled dogs.

Redington, 74, died Monday in Fairbanks, according to the Iditarod Trail Committee.

He was the son of Joe Redington Sr., known throughout Alaska as the father of the Iditarod.

He spent his life raising and racing sled dogs, first in Knik and later in Manley Hot Springs, where he and his wife, Pam, made their home.

But it was his work as a breeder and a trainer that earned Redington Jr. the respect and admiration of fellow mushers.

"He was one of the greatest if not the greatest dog man ever seen in Alaska," said Arleigh Reynolds, a Salcha veterinarian who won two Fur Rondy titles and two North American Open titles.

"Joee's dogs still to this day are the most versatile dogs in Alaska — the kind of dogs that run in top-finishing Iditarod teams, (championship sprint teams) and dogs in stage-stop teams.

"He's the only one with that old line of versatile huskies who can do everything. … There's a lot of great dogs in Alaska, but I don't think there's another kennel with that kind of versatility."

Four of Redington Jr.'s dogs ran on the team Roxy Wright drove to victory in this year's Fur Rondy and North American races. A 2-year-old female named Pale, bred and trained by Redington Jr., led Wright's team on the final day of the Rondy and all three days of the North American Open, Reynolds said.

As a sprint musher, Redington Jr. raced for more than four decades.

He won his only Rondy title in 1966 while a member of the U.S. Army. He represented Fort Richardson in the race, and because he was racing on behalf of the government he was unable to receive any prize money, according to a 2005 Anchorage Daily News article.

Nearly 40 years later, at the age of 61, Redington Jr. placed fourth in the 2005 Rondy and third in the 2005 North American. In the final heat of that year's North American, he and his dogs recorded the day's second-fastest time.

"That's pretty good for a guy who had four bypass surgery a couple years ago," Redington told the Fairbanks Daily News-Miner.

On the three occasions the 1,000-mile Iditarod started in Fairbanks, Redington Jr. was instrumental in establishing a checkpoint at Manley Hot Springs, the Iditarod said in a statement Wednesday.

This year, the Manley checkpoint won the race's Golden Clipboard Award, presented annually to "the checkpoint that goes above and beyond during the race."

Redington Jr. knew just about everyone in the mushing world, Reynolds said. He was a fan, and then a competitor, of great sprint mushers like George Attla and Doc Lombard. Later he became a mentor to a generation or two of younger mushers, including Reynolds.

"He'd go to bed and dream about training dogs; he'd get up and water the dogs and then train them; he'd have lunch and think about dogs, and then he'd go out and train them again," Reynolds said.

"He had 74 years of experience like that. There was nobody like him. Fortunately, he passed a lot of that on. He was really free in sharing the information. A lot of guys hold onto their secrets, but Joee passed his along. He wanted to help the young guys and girls.

"… I know my ability to become a champion was attributable to my time with Joee."

Redington Jr. was the oldest son of Joe and Vi Redington. His survivors include his wife, Pam, and their two children, Heather and Joee Ray.

The funeral is scheduled for 1 p.m. Monday at Manley Hot Springs. A potluck will follow at The Hangar. Viewing and visitation will be Sunday night and Monday morning at the Tribal Hall.