Last-minute advice for Fur Rendezvous rookie mushers: Be ready to run under your own power 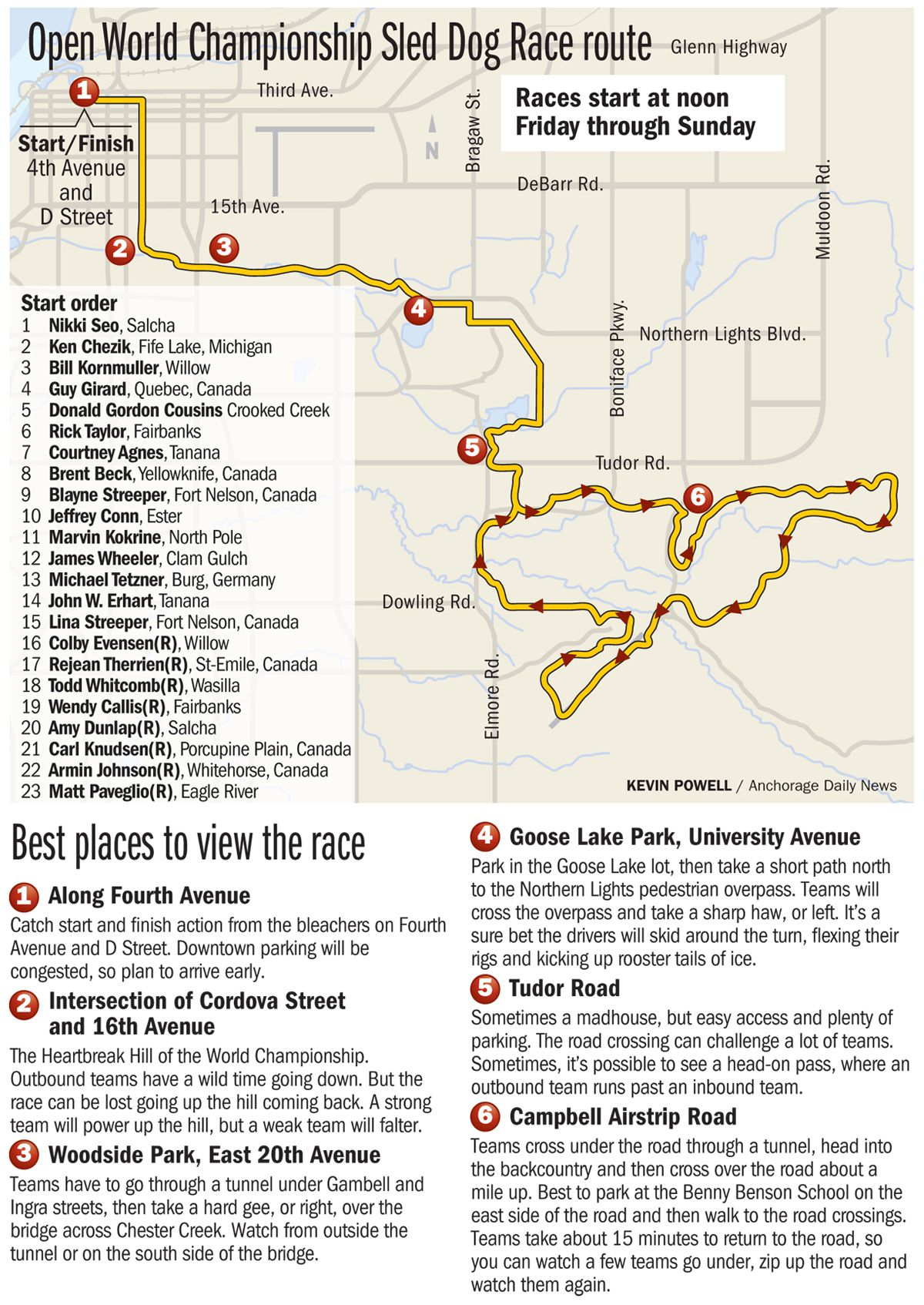 Less than 24 hours remained before Colby Evensen’s rookie run in the Fur Rendezvous Open World Championship sled dog championships, and school was still in session for the 18-year-old Willow musher.

Evensen and his mentor, 60-year-old veteran dog driver Bill Kornmuller of Willow, were standing in the Tozier Track parking lot Thursday afternoon after checking out a section of the Rondy race trail. Temperatures were in the 20s and the sky was as blue as a husky’s eyes — perfect conditions for dogs and fans, Kornmuller noted.

“That hill” is the Cordova Street hill, a popular spot for fans. Outbound teams can create excitement by gathering great speed going down the hill; inbound teams can create drama if they struggle up the hill. Inbound drivers often try to avoid a Cordova slow-down by hopping off their sled and running alongside their dogs — a move that lightens the load for the dogs.

With that in mind, Kornmuller offered Evensen some last-minute advice.

“You can’t wear bunny boots,” Kornmuller said with a glance at the heavy winter boots Evensen was wearing. “You’ve gotta run up that hill.

Kornmuller and Evensen are among 23 mushers entered in the three-day race that starts Friday. Kornmuller is one of 15 veteran racers and Evensen is one of eight rookies.

“I’m extremely encouraged by that,” race marshal Janet Clarke said. “To have one-third of the field be rookies is very encouraging.”

“There were some places on the trail that were a little iffy or bumpier than we’d like, but these last few little snowfalls filled those in,” she said.

A snowstorm predicted to dump several inches Wednesday and Thursday failed to deliver much more than one or two inches, which was a relief for Alaskan Sled Dog & Racing Association race organizers.

“There’s no way we wanted to be working with eight inches of new snow,” Clarke said.

Dogs will race 25 miles each day, with heats beginning at noon at Fourth Avenue and D Street. Mushers will leave downtown in two-minute intervals; on Friday, veteran Nikki Seo of Salcha will leave first and rookie Matt Paveglio of Eagle River will leave last.

Two past champions are among those competing for a $65,000 purse — defending champion Blayne “Buddy” Streeper of Fort Nelson, British Columbia, and 2012 winner Ken Chezik of Fife, Michigan. Streeper is a six-time champion who is chasing George Attla’s revered record of 10 Rondy championships.

Evensen, who started mushing dogs with Kornmuller about three years ago, doesn’t harbor dreams of winning as a rookie.

“I just want to make it to the end and have a good time,” he said.

He’ll drive a team of 14 dogs from Kornmuller’s kennel, including a lead dog named Linda.

Kornmuller said he named Linda after a sister who lives in Boston. He also named a dog after his other sister, Elsa, who lives in South Carolina.

Among the dogs Kornmuller will drive is one named Biter, who earned his name for obvious reasons. Biter is a good sled dog, but “he’s gotta be with the right guy every time,” Kornmuller said — otherwise he will constantly nip at the dog running next to him.

Kornmuller said he found a suitable teammate for Biter in a dog named Henry.

“They’ve reached a little bit of a consensus of how it’s gonna be done,” he said. “They don’t monkey with each other.”