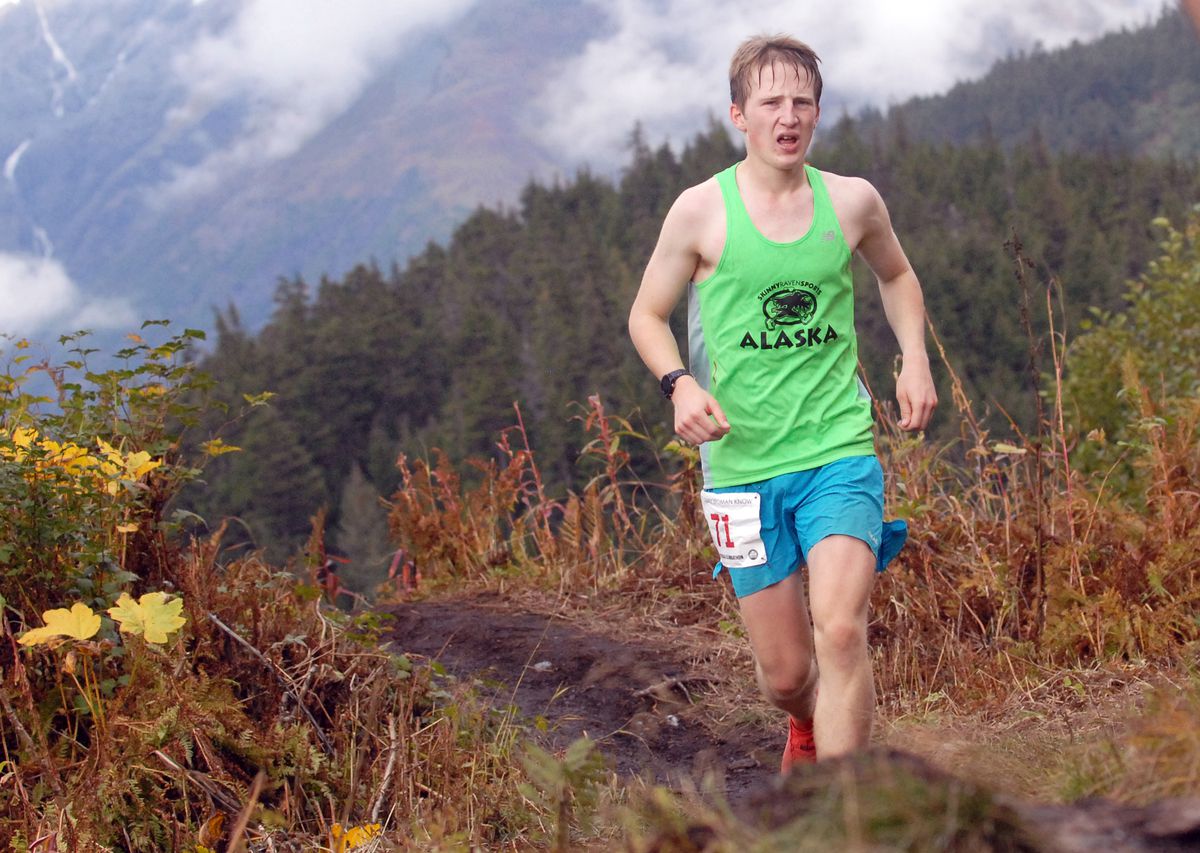 There’s no quit in Mikey Connelly.

“You’ve gotta make the impossible possible,” Connelly said after crushing the Alyeska Climbathon record Saturday by becoming the first person to complete 13 trips up the mountain’s North Face trail in less than 10 hours. “Nothing’s impossible -- you can always do it.”

The win was Connelly’s third straight at an event he’s literally grown up with. But heading into Saturday’s race the 17-year-old mountain running prodigy from Eagle River said he told friends he didn’t think a lucky 13 was in the offing.

“You know, 13 laps -- I didn’t think it was possible,” he said after polishing off a cheeseburger, fries and a slice of cheesecake at the Sitzmark Bar and Grill in Girdwood, where the post-race awards were handed out Saturday night. “I never thought 13 laps. Everybody asked me yesterday and today, ‘Can you get 13 laps? And I said, ‘Look, we’d need like, a European to come over to do 13 laps.”

As it turned out, the only European making noise in the mountains Saturday was Connelly’s mom Claire, a native Irishwoman whose distinct brogue rang up and down the steep slopes as she cheered her boy from the deck overlooking the North Face. Young Connelly said he could hear his mom yelling encouragement most of the 10 hours he spent climbing the slope again and again and again.

“I heard her from all the way down below,” he said.

Connelly’s mom was the lead member of a support team that included close friends, family and coaches. The group included Eagle River’s Chris Kirk -- who tied Connelly for the championship last year -- Connelly’s mountain running coach Jerry Ross and Connelly’s friend Sean Clapp. The men took turns running with Connelly during stretches of the race to keep him sharp as he turned in endless sub-40-minute laps from the Hotel Alyeska to the top of the tram.

Ross joined Connelly for the final two trips up the mountain and said the Chugiak High senior seemed amazingly fresh even as the 7 p.m. finish time drew near. He finished with time to spare, completing 13 laps in an unofficial time of 9 hours, 38 minutes.

Whether it’s climbing, training, talking or eating, Connelly is a an almost endless stream of energy. After he finished his 12th lap, friends tried to slow him down by pointing out he had plenty of time to catch the next tram down. Connelly ran up the stairs to the station anyway.

“We did a 35-minute lap on lap 12,” marveled Ross, the Alaska Endurance Project coach and current Lost Lake wilderness run record-holder. “He was pulling away from us.”

Conditions were good for speed, with a damp course that wasn’t overly muddy and weather that went from cool fog in the morning to spectacular sunshine in the afternoon. Connelly’s run wasn’t the only impressive feat of the day. Second-place Ryan Beckett of Anchorage knocked off 12 laps in 9 hours, 17 minutes and 39 seconds -- which would have been a new course record had Connelly not already obliterated it by doing a dozen laps in 8 hours, 51 minutes.

And Anchorage’s Lisa Anglen won her first women’s title, completing 10 laps to edge out Amanda Tuttle, who also completed 10 trips to the top.

Race organizers said 323 Climbathon participants set out starting at 9 a.m. Saturday with the goal of climbing the North Face as many times as possible over the next 10 hours. The annual event is a fundraiser for gynecological cancers. Alyeska Resort’s Brian Burnett said this year’s race was on pace to raise more than $90,000, of which 75 percent goes to the “Let Every Woman Know” nonprofit and 25 percent goes to the Girdwood Health Clinic.

“All of the money stays right here in Alaska,” Burnett said.

For many racers -- like U.S. Sen. Lisa Murkowski and her husband Verne Martell -- one lap was enough, while others went for as many trips as their legs could handle up the rugged trail into the Chugach Mountains.

“Is there any more spectacular hike that you could come do?” asked Murkowski, 62, after she and her husband received a warm greeting from the crowd at the top. “And for a good cause.”

The couple made the hike up in about 80 minutes said Murkowski, an avid skier who said she’s shredded the 2,000 vertical feet, double black diamond North Face downhill on skis but had never before hiked up the slope in summer.

“It was wonderful to see Christmas and New Year’s chutes and get a different perspective on it,” she said.

The event has grown from 42 racers during its inaugural year in 2008 to filling all 400 race spots in a matter of hours this year. With each racer averaging about four to five laps each, that’s a lot of trips up the mountain.

“Basically about 1,400 people came up the trail today,” Burnett said. “That’s quite a bit of effort when you think about it.”

No one put in more effort than the human Stairmaster called Mikey Connelly.

“We’re lucky to watch a young athlete like that develop,” Burnett said. “And not only is he a strong athlete, he’s just a really good kid.”

Ross said the thing that separates Connelly from the crowd is the teen’s work ethic and attitude. A mountain running fanatic who has been a fixture on the Alaska racing scene since he was a small child, Connelly’s appetite for uphill may be the only thing that matches his hunger for hamburgers.

“With Mikey he worked so hard the last year, I think very few people are working as hard as he is year-round,” Ross said.

In a uniquely sisyphean race like the Climbathon -- in which racers hike up the mountainside only to catch a tram to the bottom and start all over again -- Ross said a strong will is the most important attribute an athlete can have.

“It’s so mental,” he said. “In Mikey’s case he’s been doing this since he was 6-years old, so he’s almost a little calloused to the mental effort that it takes.”

Ross said Connelly’s feat -- more than 26,000 feet of climbing over nearly 29 miles -- is hard to put into perspective.

A former Jr. Mount Marathon champion who won a bronze medal at the Jr. World Skyrunning Championships earlier this year in Europe -- Connelly said the Climbathon is his favorite mountain race precisely because of its relentlessness.

“There were a couple laps I felt like I wanted to drop out, but that’s every year,” he said. “This race is more a mental race than it is a physical race. And it’s more mentally strengthening than it is physical. You’ve gotta want to do this. You’ve got to keep pushing through that mental barrier in your head.”

Each lap up the mountain is named for a different peak with an equivalent number of vertical feet Burnett said. For example, 10 laps -- 20,000 feet -- is the equivalent of climbing Denali. A dozen laps is named Chamlang after the 24,152-foot peak in the Himalayas. For being the first to reach 13 laps, Connelly gets to pick the name of the next peak. But there’s just one problem -- he’s running out of mountains, as there’s only approximately 18 peaks on the planet that tall or taller.

“Maybe if I can stack two mountains,” said Connelly, who said he hadn’t yet given the naming conundrum much thought.

He said anyone who tests themselves against the full 10 hours of climbing will be rewarded with the knowledge they’re capable of more than they thought possible.

After finishing his final lap Saturday, Connelly collapsed into a heap near the finish line, his famously boundless energy finally sapped after burning through enough calories to power a small city.

“I left everything out there. And then when I crossed the line I just felt miserable, that’s the best I can sum it up for you,” he said.

But Connelly’s death stare quickly turned into a grin when friends and fans began covering him in food, and for the next couple minutes he seemingly attempted to set a competitive eating record as he devoured a sandwich, banana, potato chips, cookies and soda pop simultaneously. He’d add more at the post-race awards.

Although most of his thoughts were on food Saturday night, Connelly admitted he’s already looking forward to next fall. After doing something he never thought possible, the young king of the mountains said the sky remains the limit.