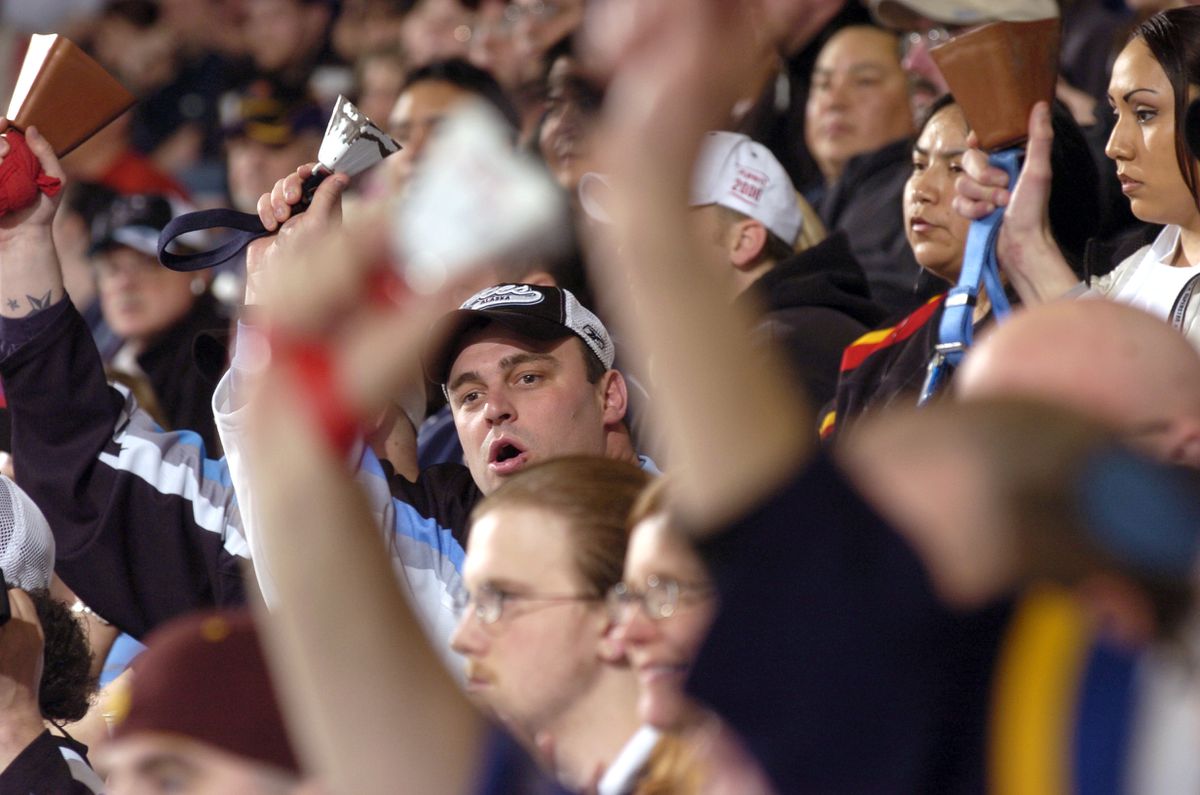 The “cowbell crew” rings for the Alaska Aces in their 3-2 loss to the Fresno Falcons in Game 1 of the National Conference finals at Sullivan Arena on May 8, 2006. (Bill Roth / ADN archive 2006)

The “cowbell crew” rings for the Alaska Aces in their 3-2 loss to the Fresno Falcons in Game 1 of the National Conference finals at Sullivan Arena on May 8, 2006. (Bill Roth / ADN archive 2006)

Friends won the jersey in a raffle and Lake, Joy's favorite player, hand-delivered it with a special note after Joy underwent successful emergency open-heart surgery.

"These players that come up here are good, honest, genuine people," Gilbert said. "They become part of our lives more than just watching them on the ice."

Aces fans since the mid-1990s, the Gilberts are among the many fans saddened by the loss of Alaska's only professional sports team.

Gilbert, 47, better known as "Bluebeard" by Aces fans, is easy to spot at Sullivan Arena with his long, bright-blue beard. Even more recognizable is Bobby Hill, an Aces Hall of Fame member who is touted as the team's No. 1 fan.

Hill, a 37-year-old Special Olympian and Aces fan for the past 16 years, performs his signature "Horseman" routine at every home game. Announcer Bob Lester will yell, "What time is it? It's Bobby Hill time!" and then Hill appears on the video board, high-fiving fans as he gallops around the arena with a hockey stick to the sound of the "William Tell Overture" and the cheers of the crowd.

"It started, like, in 2005 when they played the 'William Tell Overture.' He just stood up by his chair and just danced," said Bob Hill, Bobby's father. "The next year, he went down a little bit and danced, the year after that he went back and forth without a hockey stick. And then, like, the fifth year, somebody gave him a hockey stick and it went on from there."

[Photos: The Aces through the years]

Bob, 71, said he can't imagine winters without the Aces.

"Everybody knows (Bobby), and nobody would've known him before the Aces," he said. "It (will leave) a big void."

Flori Hamilton, a 71-year-old retired elementary school secretary, said she was shocked when she first heard the Aces might be folding, but she said when she thought about it, it wasn't a complete surprise.

During a preseason meet-the-players night, she said, Aces managing member Terry Parks revealed to Hamilton and other season ticket holders some of the financial problems the team has dealt with the last couple of years, and said it was critical to get more people in the seats this season.

The Aces are averaging 3,400 fans per game this season, according to ECHL attendance numbers — well below their peak of 5,152 fans per game during the 2006-07 season.

"There's a lot that goes into having a team here, and there's a lot going on in the economy right now, so people are having to make choices," Hamilton said. "But it's really sad that the demise of the Aces (is) one of those sacrifices.

"I have no idea what I would do every weekend from September to, well, hopefully June, that we are watching hockey. It has just become such a part of our lives and our grandkids' (lives). I don't bake cookies, so I know I wouldn't be doing that."

Brian Sison, a 26-year-old retail manager, said he's made more than a hundred friends at Aces games over the last decade. He considers many of them family.

"Over the few years, we've met and became close with a lot of the fans to the point where we started to call them family," Sison said. "It's always something that we look forward to — seeing each other during the wintertime."

A lifelong Alaskan and Aces season ticket holder since 2009, Sison said the demise of the Aces is surprising. He said if it was going to happen, he expected more advance notice — not an announcement in the waning moments of a season.

"For it to come out of nowhere and to randomly hear that it's not the following season but it's this season — that's the part that shocked me," he said. "That it was so immediate."

Now, Sison and other longtime fans wonder how they will spend their winter nights in the future.