They came to Alaska as exchange students - and became hockey players 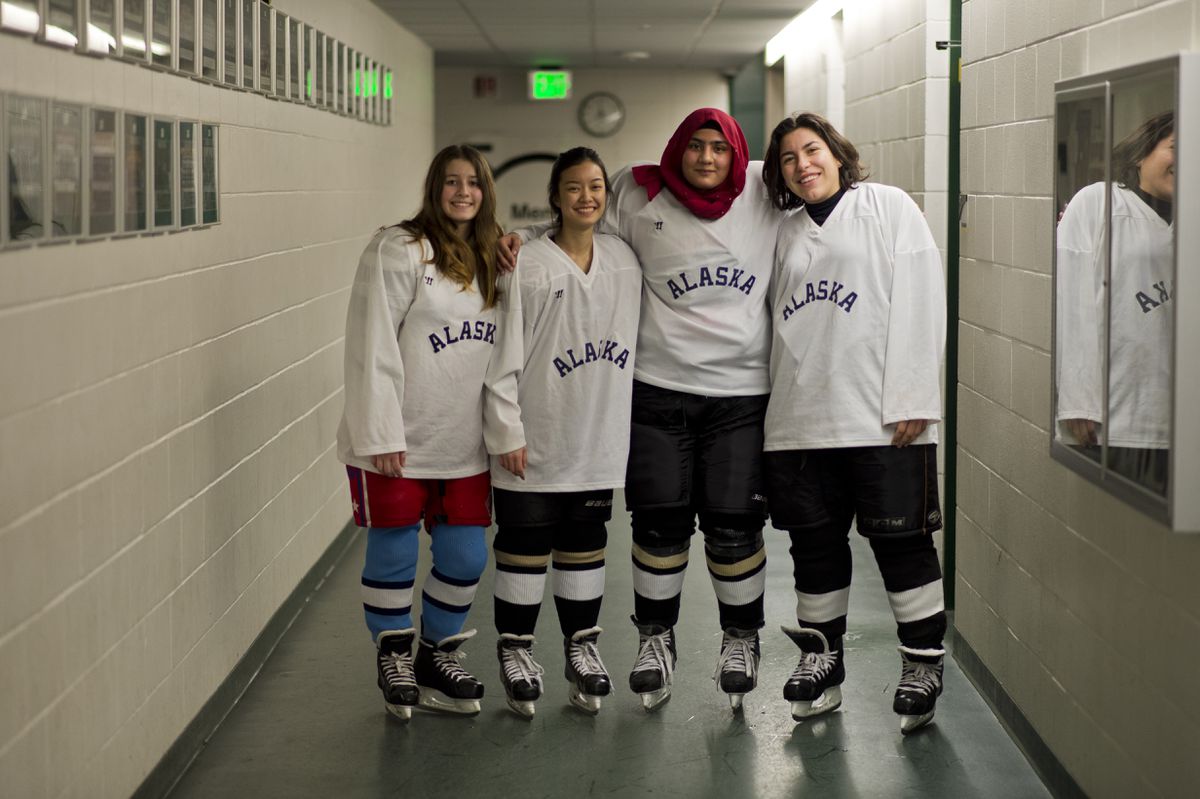 It’s Senior Night for the Anchorage high school girls hockey league, and among those being honored at Dempsey Anderson Arena are the league’s four foreign exchange students.

Three of the four are wearing silly tiaras. One, a 16-year-old from Pakistan, puts hers on top of a dark blue hijab headscarf that matches her blue and gold South/Bartlett sweater.

Girl power, it turns out, does not get lost in translation.

The four players come from all over the globe — Brazil, Thailand, Spain, Pakistan. Hockey is their new frontier, one they’ve ventured into fearlessly.

“Ice hockey is something different, and my goal was to do different things that I’ve never done,” said Leena Tarar of Khewra, Pakistan, who knew how to rollerblade but had never been on ice until she joined the South-Bartlett team.

Giulia Brunetta, a 15-year-old from Curitiba, Brazil, decided hockey would be her new sport on her second day in Anchorage, when she went to Westchester Lagoon with her host family.

None of the girls knew how to play before they came to Alaska, although all were involved in sports. Alicia Prieto, a 16-year-old from Galicia, Spain, came to Eagle River High School as an experienced rollerblader and was able to adapt those skills to the ice. She scored four goals in a junior varsity game two weeks ago.

Jom Pukkanavanich, a 16-year-old from Bangkok, had never been on blades, skates or ice before and is still developing confidence as a skater. But she’s having a blast. “I want to keep playing,” she said.

She’s in the right place.

Girls hockey has been in Anchorage high schools since 2003 but, like Pukkanavanich, it is fledgling. Participation is low, and everyone is welcome.

The four exchange students are among 73 girls playing this season, said Brian Gross of the Anchorage Hockey Association, which took over the league this season.

In 2013 the Anchorage School District cut girls hockey and the Scotty Gomez Foundation stepped in to run it, and two years later Dick’s Sporting Goods donated $200,000 to keep the league going for three more seasons. That money ran out last season, and the league was in danger of folding until the AHA stepped in.

Gross said it cost $56,000 for the season, including coaching stipends. Players paid $225 participation fees and sold raffle tickets to help pay for it.

“We think there’ll be a little left over for next year, so we can be back next year,” Gross said. “Hopefully next year will be a boom.”

This year, the league added two junior varsity teams to its four varsity teams, something Gross said provided a more competitive experience for varsity-level players while continuing to accommodate true novices like the exchange students.

To keep expenses in check, most of the junior varsity games were played on the Mulcahy outdoor rink. For Brunetta, the Brazilian, outdoor hockey was just another part of the adventure.

“Everything is like frozen,” she said. “When you open your mouth to take a breath, your teeth freeze. Like really.”

Indoors or outdoors, the chance to play organized sports was something Prieto looked forward to when she learned she was coming to an American high school for a year-long exchange.

In Spain, sports are typically organized by clubs, not schools, and they feel more elite, she said.

“Sports are outside of school,” Prieto said. “It feels like if you are not good you can’t play. Here it’s easy to join a sport.”

Tarar ticked off a long list of sports that she plays in Pakistan — soccer, basketball, badminton, tennis. She won an age-group national championship in badminton a couple of years ago, she said.

She talks about her athletic pursuits casually, like it’s no big deal to be a Pakistani girl who plays ice hockey. But she acknowledges that not many girls in her country get similar chances to play sports.

“There are still taboos,” she said.

Like many Muslim girls and women, Tarar wears a hijab headscarf, but when she plays hockey she replaces it with a hijab cap that fits better under her helmet. To some, she’s a symbol of empowerment.

“To see her out there with a hijab under her helmet — it gives me goosebumps,” said Eyler, Brunetta’s host mother.

“I am thrilled beyond measure to see a Muslim girl who comes from a culture so restrictive to women to come out here and say, ‘I want to play hockey,’ ’’ Jones said. “Oh, yeah.”

It’s not all about breaking barriers for Tarar. She’s playing hockey because she thought it would be fun, and it is. When she scored her first goal in a late-season game, she texted the news to Jones:

“She put on the skates and I couldn’t believe she could skate as well as she did,” Moore said. “She’s a strong girl. People are banging into her and just falling down.”

“She was better than I was when I started, by a long shot,” he said. “She is a natural athlete.”

Alas, her hockey career will be one of the shortest on record. Brunetta began her year-long exchange at the beginning of January. The hockey season was halfway over and her host mother wasn’t sure if anyone, much less a total novice, would be allowed to join a team. Gross made it happen with help from the school district, Eyler said.

Three weeks later, Brunetta was being honored on Senior Night and the hockey season was almost over.

Then with a grin as big as a goal mouth, she headed to the dressing room to get ready for the game, blowing kisses as she left.

“I will do my best in my one-month career,” she said.