Once Bartlett High’s JV coach, the new boss feels like an old friend to some football players 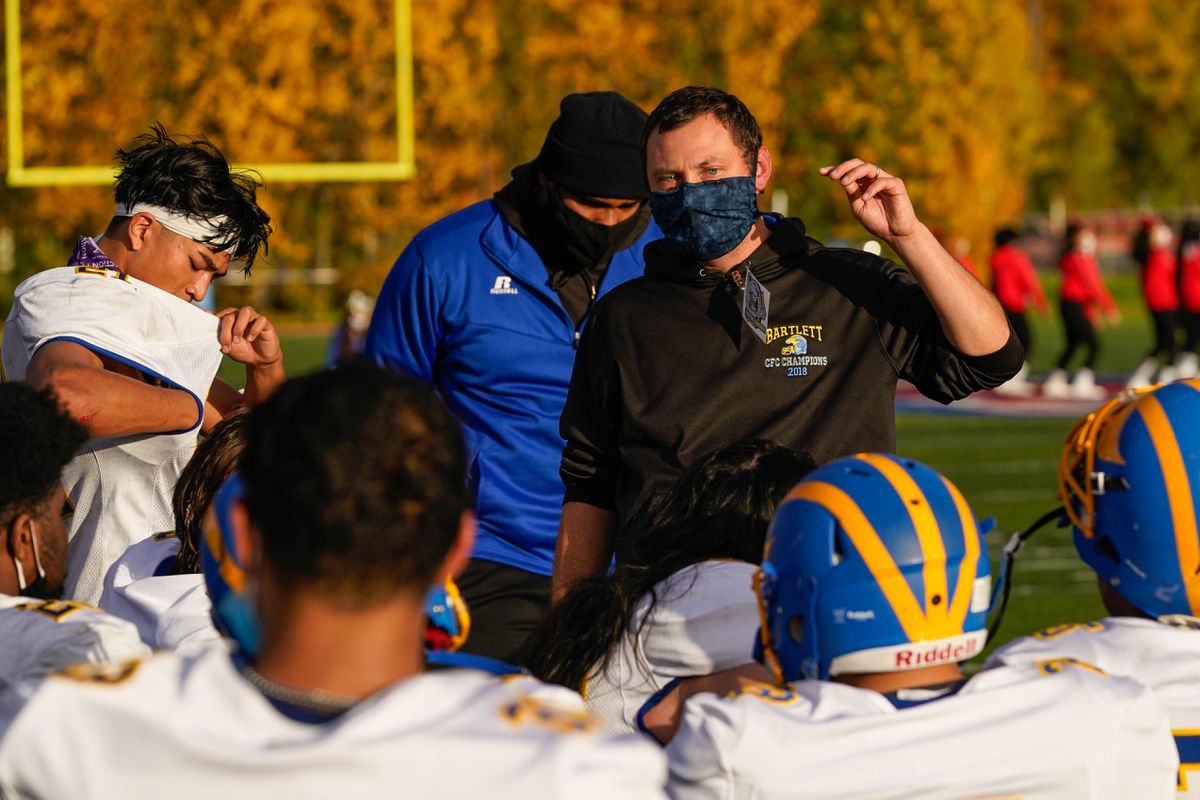 Bartlett Golden Bears coach Chance Matsuoka talks with his team during a game against the East Thunderbirds. (Loren Holmes / ADN)

Bartlett Golden Bears coach Chance Matsuoka talks with his team during a game against the East Thunderbirds. (Loren Holmes / ADN)

They didn’t have to say hello to the new head coach, because they were already well-acquainted with Chance Matsuoka.

Matsuoka, 31, has been a member of the coaching staff since 2013. He was working as an intern at the school when Jessen brought him on as an assistant.

A math teacher at Bartlett, Matsuoka worked his way up through the ranks. He coached wide receivers in his first year and was named junior varsity head coach and varsity running backs coach the following year. He spent four years as the head JV coach while simultaneously coaching the varsity running backs and defensive backs before taking the 2019 season off.

During the 2018 JV season, Matsuoka coached every senior on this year’s team. Those players were sophomores then, and some look back fondly to the days when the foundation for this year’s team was built.

“The JV years,” senior defensive end Lotomama Manogiamanu said of his favorite memories of playing for Matsuoka. “We came a long way from the team he had before that year and only lost one game.”

Matsuoka has guided the Golden Bears to a 3-2 record during the condensed 2020 regular season. They play the reigning state champion South Wolverines at 2 p.m. Saturday in a semifinal game of the Anchorage School District playoffs.

Three of Bartlett’s five games have been decided by eight or less points. Two of those were losses — 42-34 to Service in the season opener and 14-8 to East two weeks later. The other was a 20-25 win over previously undefeated Eagle River.

“Every game we’ve played, we’ve been in it until the last minute,” Matsuoka said. “And every game, whether we’ve won or lost, our kids are battling until the very last whistle.”

Matsuoka is more than a coach to many of his players. Since his days as a JV coach, he has developed bonds with them that extend beyond the playing field. He holds players accountable for their performance and behavior on the gridiron, in the classroom and in their everyday lives.

“He’s probably the best coach I’ve ever had just because he likes to make a real personal connection with just about every single player on the team,” senior wide receiver Ajay Gordan said. “He likes to focus on making each player better and everybody work better as a team.”

Matsuoka and his family have invited players to their home to share meals, and they have been there for players and their families in hard times. Junior quarterback Reason Timberlake said that when his family was going through some difficulties, Matsuoka’s wife made them dinner.

“I don’t really see him as a coach,” Manogiamanu said. “He’s more like a brother to me. Every time we see each other it’s not always about football, and that’s the kind of thing I like.”