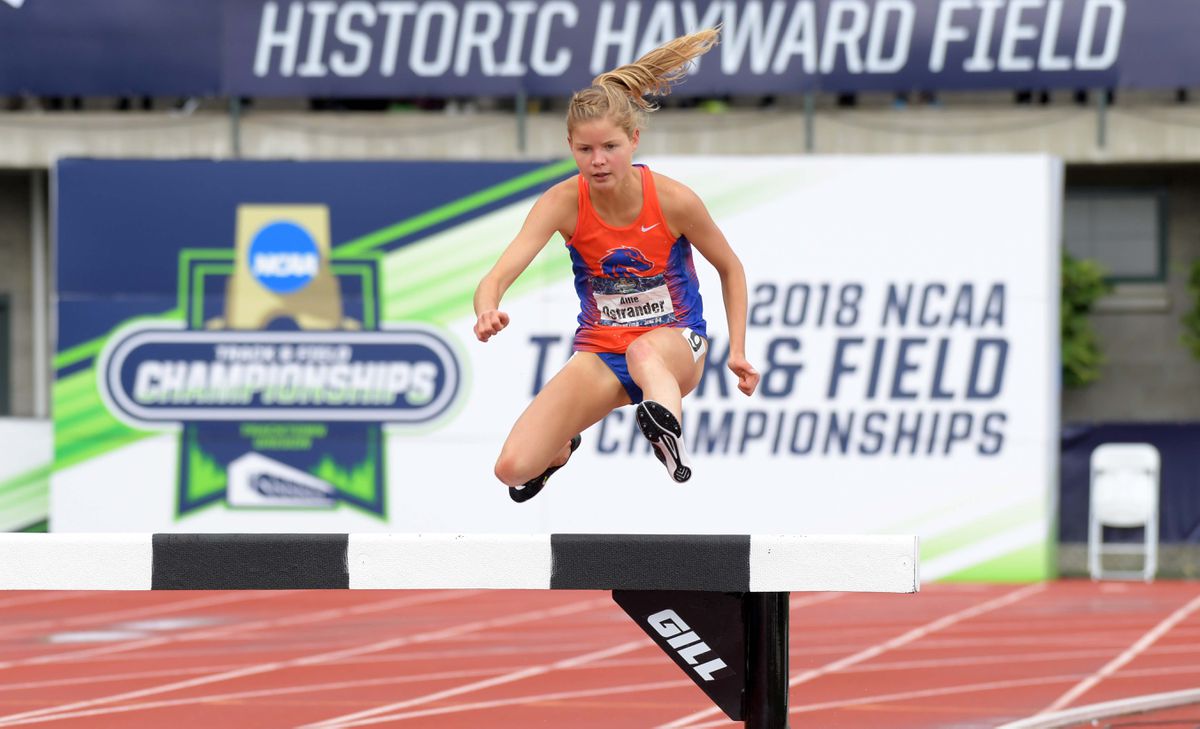 She made it look easy.

Allie Ostrander won her second straight steeplechase title Saturday at the NCAA track and field championships, shedding the competition with about two laps to go in the 3,000-meter steeplechase.

The Kenai Central graduate won the race by about 30 meters, widening the gap with every stride she took on the Hayward Field oval in Eugene, Oregon.

"I think year one was a bit more of a surprise, but winning again meant a lot to me," Ostrander told reporters after the race. "To be able to maintain my spot at the top was really special."

Ostrander, a Boise State sophomore, won in 9 minutes, 39.27 seconds. She was more than six seconds ahead of second-place Charlotte Prouse of New Mexico, who nipped Syracuse's Paige Stoner right at the end. Prouse (9:45.45) and Stoner (9:46.98) both recorded personal bests, but that wasn't enough to beat Ostrander, who has never lost a steeplechase race.

Ostrander shared hugs with her parents and sister after her victory, and then began preparing for another race.

About 90 minutes after the steeplechase ended, Ostrander earned All-America honors in the 5,000 meters by placing eighth. Karissa Schweizer of Missouri won in 15:41.58; Ostrander clocked 15:46.50 and was less than half a second out of sixth place.

No woman distance or mid-distance runner has ever won two races on the same day at the NCAA championships. Last year as a redshirt freshman, Ostrander won the steeplechase and placed fourth in the 5,000 meters.

A race that requires runners to hurdle solid barriers and splash through water hazards, the steeplechase is a natural event for Ostrander. She's an expert trail and mountain runner who is the defending Mount Marathon women's champion.

She looked relaxed as she distanced herself from her pursuers, who looked labored by comparison. Though she missed her personal-best time of 9:38.57, set earlier this season, she bettered the time of 9:41.31 she ran at last year's NCAA championships.

"It looked very under control and relaxed," Boise State coach Corey Ihmels said in a press release from Boise State. "She wasn't pressured at any point and she just kind of clicked along, and the end result was the same (as last season). But this was definitely more impressive than what we saw last year."

She's the second Alaskan to win two or more NCAA Division I championships. Jordan Clark of Anchorage was a four-time shot put champion for Arizona State (2009-13).

Chugiak's David Morris, who won the 3,000 meters for the Unversity of Montana at the 2013 indoor championships, is believed to be Alaska's only other Division I track champion.