Hikers beware: Cow parsnip can inflict pain on those who don't take precautions 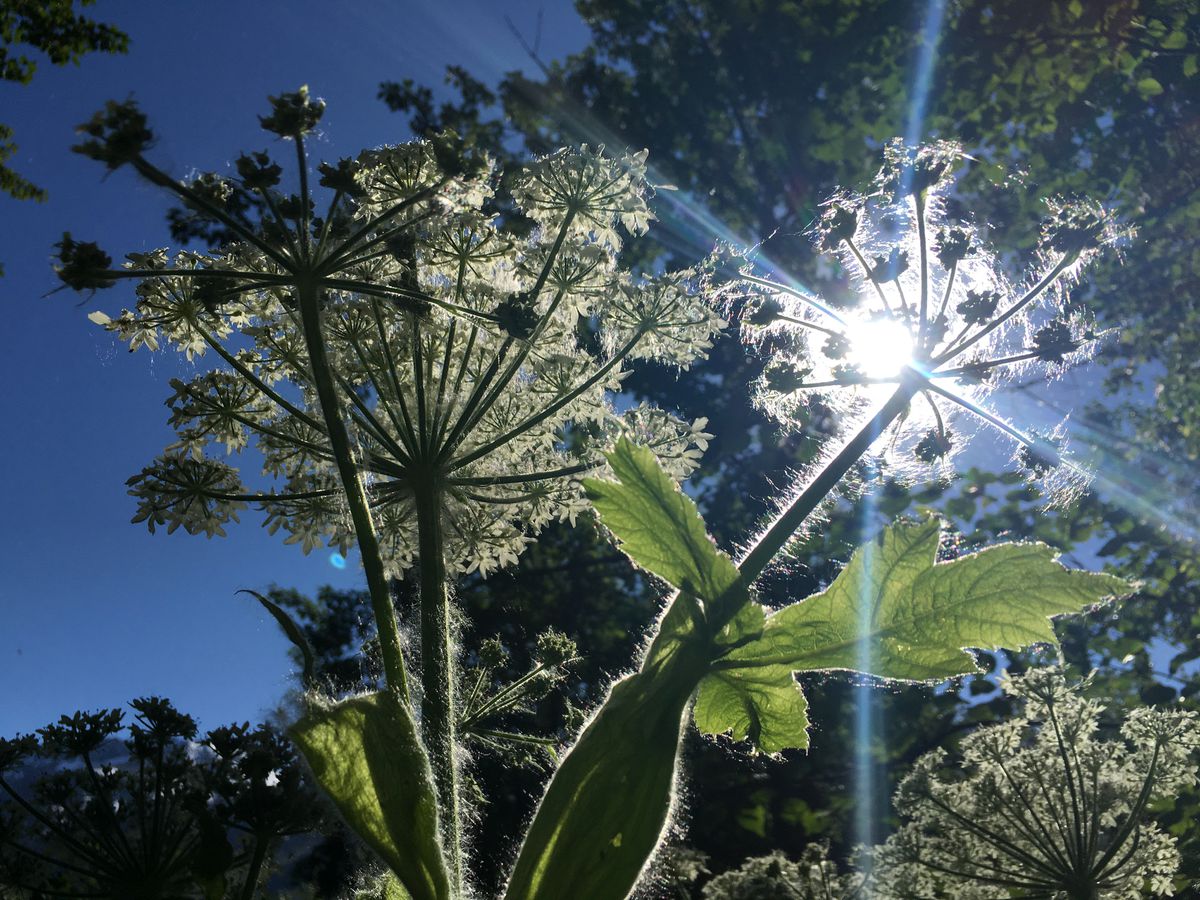 Cow parsnip blooms in the sunshine alongside the trail at the Eagle River Nature Center this week near Eagle River. (Bob Hallinen / Alaska Dispatch News)

Cow parsnip blooms in the sunshine alongside the trail at the Eagle River Nature Center this week near Eagle River. (Bob Hallinen / Alaska Dispatch News)

Within a couple miles of our 25-mile hike, I knew I was going to pay later. Everywhere I looked, I saw the large leaves and tall stalks of cow parsnip.

Initially I tried to avoid contact with the plants, also called pushki, but despite my best efforts, I could feel the plants brush against my bare arms and legs. Before long, I gave up trying to dodge the plants and told myself that I would take the mother of all showers and wash off the toxic residue when I got home.

After convincing myself that my skin reaction wouldn't be too bad, I got back to enjoying the hike and the beautiful scenery. With hiking partners Rob and Clint, we planned to hike up Moose Creek Valley, check out the Dnigi Hut owned by the Alaska Mountaineering Club, cross over Grizzly Pass, drop down to Mint Glacier and then walk out the Gold Mint Trail in Hatcher Pass.

We followed some trails (both people and game) and did some moderate bushwhacking. It was a perfect early August day, with clear skies and temperatures reaching into the upper 70s.

Awesome, I thought — until I started seeing the ubiquitous cow parsnip.

Cow parsnip (Heracleum Maximum, a genus supposedly named after Hercules) is a large-leafed plant that can reach heights of more than seven feet and somewhat resembles devil's club. The stems and leaves contain furocoumarins, a photosensitive chemical that can lead to rash and blisters on some people after exposure to ultraviolet light.

"It appears the defensive value of furocoumarins is all about using ultraviolet light to poison bugs," wrote Ed Berg, ecologist at the Kenai National Wildlife Refuge, in a paper on the topic. "Generally, insects are the main threat to plants and the fact that many species in this plant family have furocoumarin compounds strongly indicates that insect defense is the primary function of these compounds.

"Human rashes and blisters thus appear to be an accidental by-product of the plant-insect arms race."

Unfortunately, I am one of those people sensitive to the plant. Though everyone is susceptible to cow parsnip with enough exposure, some people are more prone to it.

I have only negative thoughts about these plants, but braver and more resourceful people eat the young stems after peeling off the outer skin.

[Headed out for a hike? Our interactive map can help]

I was surprised to learn that some people aren't familiar with the plant or the skin reaction it can cause. I am all too familiar with it, having had a couple of dozen minor reactions to the plant in my life. I attempt to minimize the rash, blisters and itchy, burning, swollen skin by washing in creeks and showering as soon as possible.

The outcome is usually the same, though. Within three or four days, small blisters and rash appear. Then comes another three days of trying not to scratch the itchy areas. And two or three weeks later, the plant's effects are mostly gone.

This time was different.

A day after the hike, a rash and red, itchy skin started appearing.

By Day 2, large, fluid-filled blisters appeared on my legs. The blisters were pretty freaky, with vertical sides and expanding to the point where they stretched the skin tight.

From Days 3 through 7, bursting blisters yielded honey-colored fluid. More new blisters appeared, both as single entities but also palm-sized areas where the skin was dark red, with texture like lizard skin, containing hundreds of small blisters. The ugly appearance was less important than the burning itch that accompanied it.

To calm the burn, I tried hydrocortisone cream, calamine lotion, lavender oil, burn relief spray, oatmeal baths, topical steroid cream and Benadryl. Nothing seemed to put out the fire. The only thing that brought any relief, albeit short-lived, was soaking in an ice-cold bath or applying ice to the red, itchy, inflamed areas. For several nights, the burning itch woke me up every hour or two.

I followed the same routine: stumble out of bed, get into the tub filled with cold water and stay there until the burn subsided. Go back to bed and repeat two hours later.

By Day 9, I was starting to get concerned. I still had all of the previously mentioned symptoms, but I also noticed some pain and swelling just below my belt line on both sides of my body.

My wife had had enough. She told me to stop being a dummy and go to the doctor. By this point I was a little freaked out, tired of my coworkers doing double-takes at my circus-act legs (I wore shorts because pants were too painful).

So I gave in and made an appointment. My physician's assistant told me I had a pretty bad case and that I had slightly swollen lymph nodes from fighting the plant's effects and infection. She recommended an oral steroid to calm everything down. I picked up the prescription and started my five-day dose of pills. Within six hours, the swelling and itching were reduced significantly. The stuff was a godsend!

The only downside was slightly blurred vision. But if I could do it over, I would definitely go to the doctor sooner. By Day 16, I felt much better. New blisters stopped hatching, my swelling was way down and the itch was almost gone. Fast forward to today, 10 months later, and the scars are gone but some skin discoloration remains.

This summer, cow parsnip appears to be thriving in Alaska, which offers some ideal conditions — "moist habitats such as streams, woods and meadows," according to Justin Fulkerson, a botanist at the Alaska Center for Conservation Science. The plants are widespread and appear to be larger than normal for this time of year, perhaps due to our mild winter and spring.

Given that poison ivy doesn't thrive in Alaska, cow parsnip may inflict more pain than any other plant in the 49th state.

"I've had anguish from devil's club personally," Fulkerson noted. "There is another plant that looks similar to cow parsnip but inflicts more severe damage, giant hogweed. This is a non-native species that has received a lot of news in Canada. It can cause severe blisters, burns and even blindness if gotten in the eyes. It was found in Kake in 2010 but was quickly eradicated the following year and hasn't been found again in Alaska. We do track it and keep an eye out."

My bout with cow parsnip was definitely the nastiest plant encounter that I have experienced in Alaska or elsewhere. I've learned my lesson and will bring pants and a long-sleeved shirt on future hikes.

Paul LaFrance lives with his wife Julie in the Valley and enjoys the Alaska outdoors as often as he can.