Want to park a tiny house in Anchorage? It might be hard to find a space 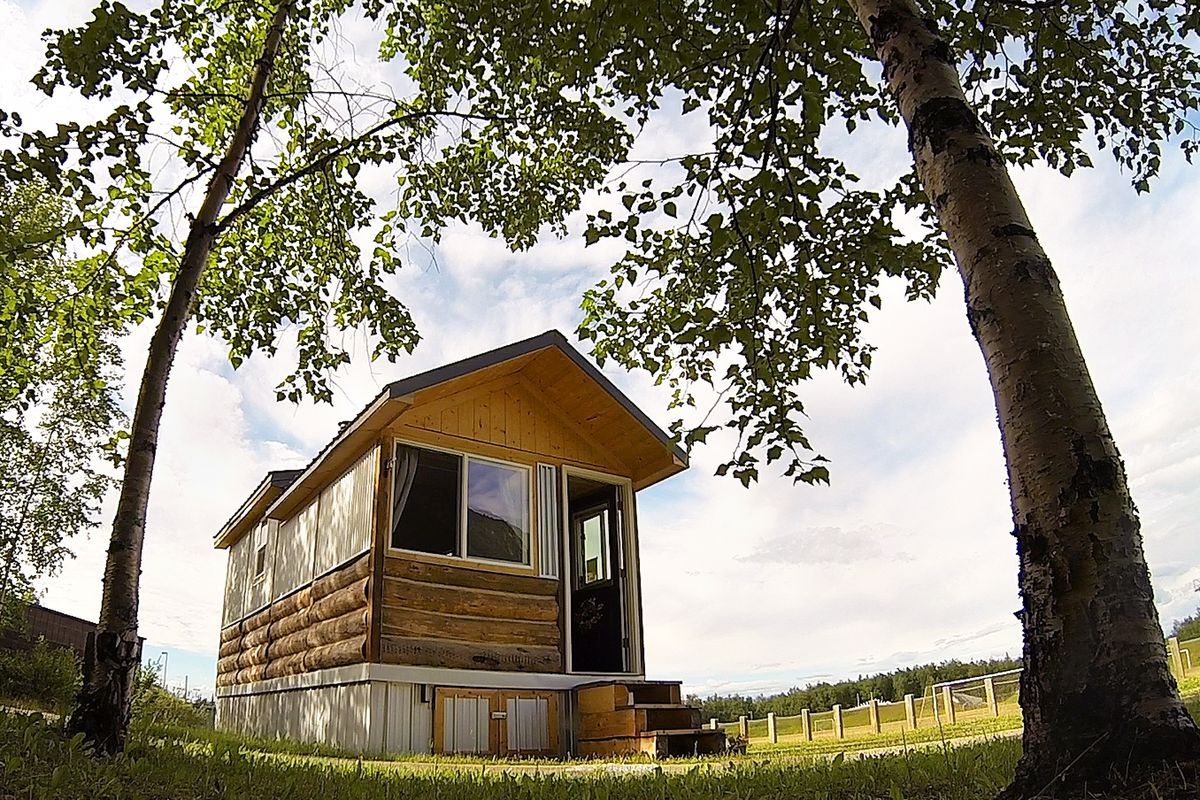 Brian and Deborah Schaffer downsized from their full-sized family home last year and moved into this tiny house after their youngest son graduated from high school. The home is temporarily at Mirror Lake Middle School in Peters Creek while the Schaffers provide security for the school district. They will have to move the house somewhere else at the end of summer break. (Scott Jensen / Alaska Dispatch News)

Brian and Deborah Schaffer downsized from their full-sized family home last year and moved into this tiny house after their youngest son graduated from high school. The home is temporarily at Mirror Lake Middle School in Peters Creek while the Schaffers provide security for the school district. They will have to move the house somewhere else at the end of summer break. (Scott Jensen / Alaska Dispatch News)

With affordable housing in mind, municipal planners are considering ways to expand housing options in Anchorage, including by making a little bit of room for tiny houses.

The mobile cottages have become increasingly popular in the Lower 48 but they're still just taking hold in Alaska, where they have a growing fan club that even includes a tiny-house designer.

The city's planning effort includes a review of municipal code that currently creates obstacles for people hoping to live in the little trailer-pulled houses that can go for $50,000.

Helping gather information for the review is Kristine Bunnell, a senior planner who one day hopes to have her own tiny house on land she owns in Seldovia near Homer.

"I've been paring down stuff for quite a few years now and I want the freedom of no mortgage payment," she said. "But I also want something that's mine."

At about 400 square feet or less — often not much bigger than a shed — the houses can be hauled more easily than a traditional mobile home, advocates say.

With their pitched roofs and wooden siding, some look like they jumped from the pages of a woodland fairy tale. But they can offer the amenities of, say, an efficiency apartment, including running water and flush toilets.

Bunnell said she's working with a builder and planning a home that will include a bedroom, a guest sleeping loft and a single-log stove.

The kitchen will include a standard-sized oven.

"I have grandkids and they like to visit Grammy," she said.

Despite their charm and a small industry in Alaska waiting to build them, there don't appear to be many tiny houses in the state.

But that may change with municipal planners taking steps that could expand housing options.

Chris Schutte, Anchorage's director of Economic and Community Development, said the city is considering how to support alternative dwelling options that can provide high-quality but affordable homes as Anchorage grows.

Tiny houses could fit in the mix.

"There is definitely a recognition that we're not producing enough housing of all types to keep up with the projected growth," Schutte said.

City code will have to be altered. Tiny houses can occupy spots in trailer parks, where they're tied into the power and plumbing.

But let's say your mother-in-law wants to live in a tiny house behind your home. Where zoning allows them, the tiny houses must be bolted to a foundation, significantly boosting costs. But in other areas, live-in tiny houses aren't permitted at all.

One idea under a more flexible code could permit groups of tiny houses, something akin to a trailer park but with a different feel, said Terry Schoenthal, manager of Anchorage's planning section.

A tiny-house park could include such facilities as a laundromat, since tiny houses don't often have washing machines. A community house might providing lodging for extra guests.

"We don't have a lot of options for affordable housing in Anchorage, and tiny homes offer that," Schoenthal said. "And there's a cool factor with them. They offer a real sense of independence and you can develop your own style."

Builders say the houses are currently a better fit for areas outside Anchorage, where the rules are more flexible. But they say interest in them is strong statewide.

Underhill said about 4,000 people visited his model tiny house at a home show in Anchorage this spring.

Deborah Schaffer and her husband, Brian, bought a tiny, $60,000 home that was built primarily by Underhill, with split-log siding and honey-colored walls made from Alaska spruce.

The former Nazarene missionaries, whose kids are grown and on their own, are accustomed to living small and moving. Their mini-house is currently set up behind Mirror Lake Middle School in Chugiak, where they are anti-vandalism monitors with a mountain view.

"I personally hate cleaning," she said. "I find it time-consuming and I'd rather be out doing things with people and friends."

The ceiling rises high at the peak, lending a roomier-than-expected feel. The raised kitchen and bathroom allow space for water tanks beneath the floor, where they can be insulated within the house structure, preventing freezing in winter.

Their bed slides under the kitchen floor to become a sofa. Stairs double as drawers.

The pocket kitchen contains an apartment-sized refrigerator — for freezing salmon — and a glorified toaster oven for baking. The table in the dining nook can be expanded and moved to seat six for dinner parties. They've had a few.

"My most elaborate meal was grilled salmon, salad and sundaes," she said.

The tight living makes for some extra work. The sawdust toilet needs dumping weekly and the 100-gallon water tank needs filling. Schaffer uses 14 gallons when she showers, more if she bathes in the soaking tub — a big Rubbermaid cow trough she bought at a feed store.

The small space cuts down on everything, including clothes.

She and Brian, an outreach pastor at ChangePoint church, are looking to buy land outside Anchorage.

But their options are limited to trailer parks and she wants a better view, she said. If the rules change, she'd think about getting her own spot, perhaps on the Anchorage Hillside.

"That'd be perfect," she said.