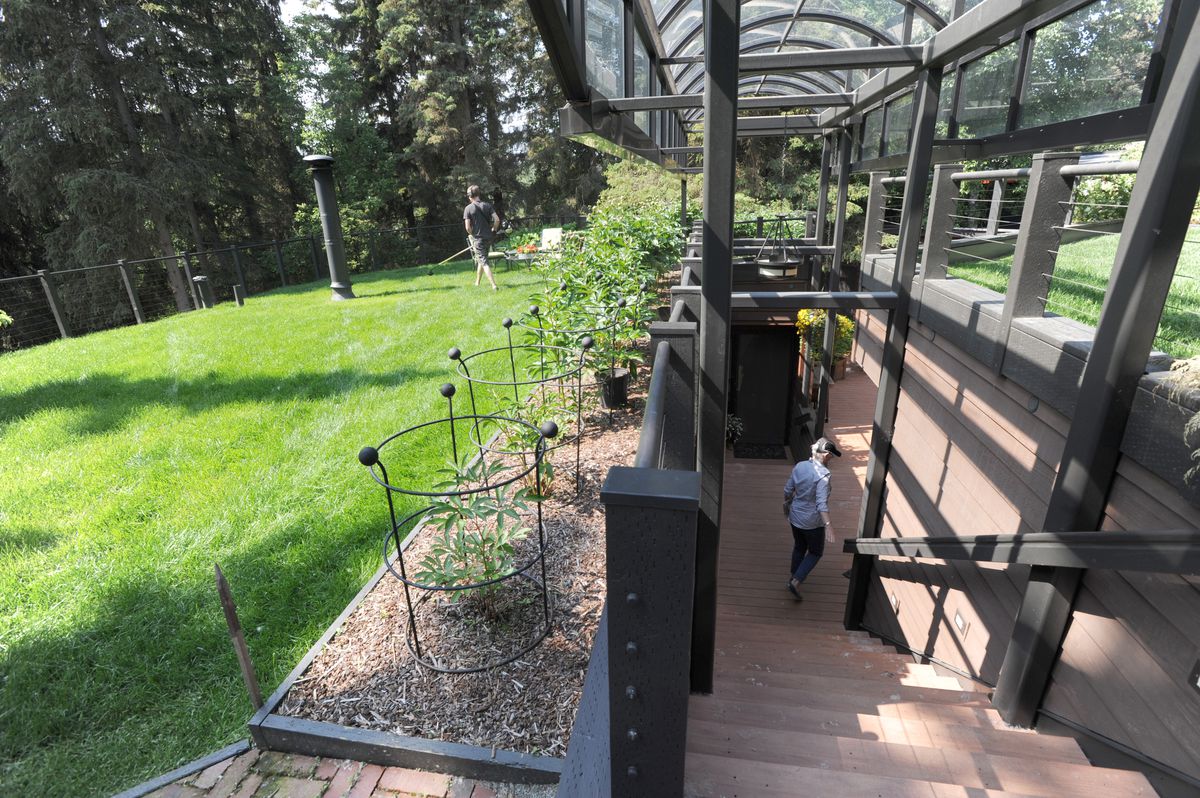 Michael Oakes, of A Cut Above Lawn Service, trims the roof/lawn of Marnie and Jon Isaacs' underground home, as Marnie walks down the steps to the front door. (Anne Raup / ADN)

Michael Oakes, of A Cut Above Lawn Service, trims the roof/lawn of Marnie and Jon Isaacs' underground home, as Marnie walks down the steps to the front door. (Anne Raup / ADN)

Jon and Marnie Isaacs were getting their children ready for school one winter morning when their son, then a second-grader, screamed.

A moose licking snow off the skylight overhead. It’s a peculiarity of living in an underground house in Alaska.

For close to four decades, the Isaacses have lived in what may be one of Anchorage’s more unusual homes, carved into a steep slope in Turnagain. From the street, the Isaacses’ home looks like a green lawn with skylights poking out of the grass, and a subway-like tunnel slanting downhill. In the summer, a red trolley passes the house two times every hour, where tour guides point it out to fascinated visitors.

The Isaacses’ memories range from curious moose to enthusiastic tourists at the end of their driveway to the unforgettable roar of the 7.1 earthquake that struck Southcentral Alaska in November 2018. They moved in when they were newlyweds. Now they plan to retire there.

“There will probably have to be an elevator at some point somewhere,” said Marnie Isaacs, sitting at the kitchen table recently with sun shining in through the roof.

In the mid-1970s, when the Isaacses bought the property, the house was a 650-square-foot basement. It was built into a steep hill that sloped down into a grove of tall spruce and birch trees to the banks of Fish Creek. The Isaacses wanted to remodel and expand their new place.

They expected to build up, on top of the basement, which was apparently the never-realized plan of the previous owner.

Then their friend, architect Pat McKittrick, came out for a look.

“He said, this is a great place for an earth shelter house,” said Jon Isaacs, a regional planner, using a term grew out of the environmental movement of the 1970s.

Marnie’s dad, a conservative lawyer in Philadelphia, thought it sounded like a hippie idea. But McKittrick pointed out the packed sand beneath the foundation, a stable soil that would also be good for drainage. He built a cardboard model to show Jon and Marnie.

The Isaacses wondered if it would be too dark in the winter. McKittrick took a flashlight and showed them how the skylights would work.

In the end, they decided to give it a shot. A bank gave them financing for it. Paul Michelsohn, an Anchorage builder, agreed to take on the project.

A 1982 Anchorage Daily News story described a complex feat, with block construction and walls waterproofed with a special rubberized asphalt developed in part by the University of Minnesota. Five layers of laminated plywood panels were applied to the exposed walls of the house and the roof, and the builders tested it with a garden hose to make sure it didn’t leak. There was a lot of careful digging to save the trees, Marnie Isaacs said.

A particular amount of effort was put into protecting the building from an earthquake. Marnie Isaacs remembers learning a lot about shear walls. An engineering team that happened to be visiting Anchorage from the Lower 48 even came by to look. They had reason to worry: The Turnagain neighborhood was hit hard by the 1964 earthquake.

Crews also built a reinforced retaining wall beneath the living room. The Isaacses moved in and started raising their two sons.

On a weekday afternoon in June, Marnie Isaacs, who retired recently from a career in community relations in the oil industry, walked out onto the tidy lawn roof.

“Right now you’re walking over the kitchen so when we get inside, this is where you are,” Marnie Isaacs said. “That’s skylight in the kitchen, so remember.”

The skylights are originals, installed in the early 1980s, she said. Her roof garden was overflowing with bright pocket flowers, mint, peonies and rhubarb.

In the mid-2000s, the Isaacses built a canopy over the stairs because they got tired of shoveling snow, Jon Isaacs said. It looks like the entrance to a subway, built by the same company that designed the skylights.

“Jon and I had the same reaction: ‘That’s a lot of above-ground stuff,’” Marnie Isaacs said. But they got used to it, she said.

The stairs lead down to a bright red door and patio area. A total of 92 steps travel between the top of the stairs and the bottom of the slope, to a boardwalk that leads to a pergola and swingset looking out over Fish Creek.

The Isaacses built an addition in 1994 that created a master bedroom and a lower-level basement area. Today, the house is roughly 2,800 square feet overall, though it feels smaller because it’s broken up into different areas, Jon Isaacs said. A person once described it as a “jewelry box.”

The main living area is a cozy, comfortable space, with smooth white walls, a fireplace, beams running down a gently sloped ceiling and a piano that Jon Isaacs plays. Big windows facing the grove of trees offer plenty of light. People come inside expecting to see something out of “Star Trek,” Marnie Isaacs said. “But it’s just a regular house.”

Twice an hour, between early May and late September, a bright red trolley stops briefly in front of the Isaacs home.

Anchorage Trolley Co. tour guides have talked about the Isaacs home for at least 15 years, said Jody Best, the company’s operations manager. She said it serves as an example of Anchorage real estate and changing neighborhoods, of energy efficiency and the broader history of earthen homes in indigenous villages.

Much of the information came directly from Marnie Isaacs, she said. Marnie Isaacs even once rode on the tour and stood up to talk about the house herself.

“It’s a good introduction to Alaskans, and how Alaskans are able to overcome anything,” Best said. “A (property) lot that’s awkward? Don’t worry, we’ll turn it into the coolest house ever.”

Once, the trolley broke down in front of the house, Best recalled. Marnie Isaacs gave all the trolley riders a tour while the trolley was fixed.

One day recently, Marnie Isaacs spotted two men at the end of the driveway waving frantically. She sent Jon out to talk to them. They were two architects from Israel, she said: “‘We saw your house on the internet! We had to come to Alaska! We had to see it! That’s why we’re here!”

The Isaacses say they like their privacy but understand the interest in the house. Lately a lot of people have stopped by wondering how the house sustained the 7.1 earthquake on Nov. 30, Marnie Isaacs said.

On that day, Jon remembers hearing “a roaring sound ... like a 747 landing on the roof.” He didn’t even think of an earthquake at first, he said. But that was the sound waves coming through, he said.

Then the earthquake hit and shook the house violently, Jon Isaacs said. They heard the creaking of the house.

“I was thinking, weight on roof, down slope ... we gotta get out of here,” Jon Isaacs said.

They safely left the house with their terrified dogs. When they came back inside, they barely found damage. No dishes fell. A few hairline cracks in the sheetrock have since been repaired. They have yet to discover structural damage, Jon Isaacs said.

The Isaacses credited the extensive cooperation that surrounded the original construction and engineering of the home, particularly city inspectors that paid close attention every step of the way, Marnie Isaacs said. McKittrick, the architect, died in the mid-1990s but lived long enough to see the house holding up.

“I can’t think of anything we would have changed,” Marnie Isaacs said.

Marnie would like to see more homes like theirs in Anchorage. She thinks it could help make neighborhoods look and feel greener.

For the Isaacses, though, the circumstances lined up perfectly, between the lot’s layout and the soil quality, Jon Isaacs said. The architect, McKittrick, told them it was meant to be.