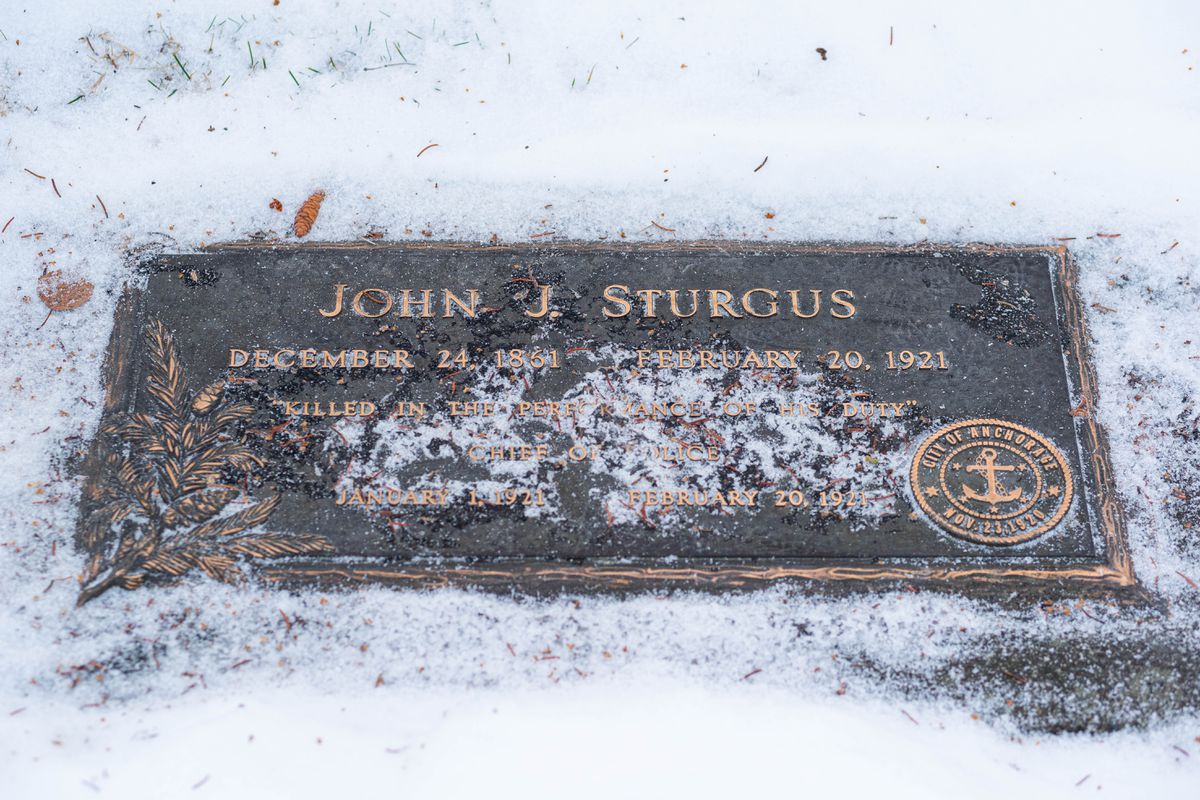 It is easy to glorify the past, to consider decades long gone as “the good old days.” Frontier Anchorage has long been mythologized into tales of hardy pioneers and individualist fortune-seekers. The reality is often grittier and darker. For early Anchorage, the story of Jack Sturgus is a more accurate mirror of what life in a relatively lawless town was like.

John “Jack” Sturgus was born in Mansfield, Ohio, on Dec. 24, 1861. He moved West on his own in the 1870s while still a teenager. Eventually he found work in law enforcement, working as a peace officer in Montana and Everett, Washington. In 1913, he moved to Alaska, part of a smaller gold rush to the Shushanna placer strike near Cordova. In 1916, he moved to Anchorage and worked as a deputy U.S. Marshal, frequently taking the night watch over the young city. In town, the Sturgus family, especially his wife, were significant, active members of the social scene; he a member of the Moose and Elks lodges and she of the Women of the Mooseheart Legion.

After the Alaska Engineering Commission withdrew from town oversight, residents voted Nov. 23, 1920, to incorporate as the self-governing City of Anchorage. The first council meeting came on Nov. 26, 1920. Anchorage at this time was more lawless than not. An area on C Street, between Sixth and Ninth Avenues, evolved into a new red-light district. As recorded for the Anchorage Daily Times, one of the first complaints made before the council detailed the threats and suggestive comments made by that area’s inhabitants towards underage girls on their way to school.

At this time, five years after the city founding, there was no consistent, effective law enforcement presence, only nightwatchmen hired by local businesses and overtaxed U.S. Marshals. It was easy for many residents to ignore the restrictions against alcohol, prostitution and gambling in town. Note that while national Prohibition began in 1920, Alaskans voted in favor of a dry territory in 1916, resulting in the Alaska Bone Dry Law of 1918. Several seemingly legitimate businesses in town were instead fronts for prostitution, gambling, bootlegging and drugs.

On Dec. 22, 1920, the Anchorage City Council unanimously appointed Sturgus as the city’s first chief of police, and he took office on Jan. 1, 1921. After three weeks on the job, he declared that Anchorage’s criminal problems were minimal, joking to the Times that he was hot “on the trail of the despised thief who steals milk from the babies, groceries from the storeroom and laundry from the hallways.” This description would become darkly ironic. On the night of Feb. 20, 1921, Sturgus was walking the town. Around 9 p.m., he passed butcher Oscar Anderson. After this chance meeting, it is impossible to reconstruct what happened in the next few minutes other than its deadly conclusion.

Sturgus’ body, still clinging to life, was discovered by a night watchman around 9:30 p.m. that night, in an alley behind the Anchorage Drug store and Liberty Cafe, near the intersection of Fourth Avenue and E Street. He was carried to the hospital, bleeding from a single gunshot wound to the chest and babbling about needing to be turned over. He did not seem to recognize any of the attendees and was unable to respond to their questions. Finally, at 10:50 p.m., he died.

The known details were scant then and all the more confusing a century later. Sturgus was shot, with his own gun, around 9:15 p.m. The gun held two empty cartridges, but witnesses heard only one shot. There were no signs of struggle or that his body had been searched. The nearby residents who heard the shot and approached agreed there were no signs of anyone fleeing the scene, despite some searching for such evidence in freshly packed snow. An autopsy revealed no signs of other wounds.

Given there was no evidence of a struggle, the subsequent coroner’s inquest raised the possibility of suicide. Testimony at the inquest revealed that on the day of his murder, Sturgus had left his billy club, handcuffs, money and identification at home. Known to carry two guns, only one, the murder weapon, was found at the scene. The second gun was never recovered. In addition, the Anchorage Daily Times reported that Sturgus’ behavior had been odd on the day of his death, including several hours spent writing letters. Still, the inquest ultimately ruled his death a murder.

The Times was generous in its requiem for Sturgus, claiming he was “perfectly conscientious in the discharge of his duties.” But in the same memorial, the paper also noted, “His manner of enforcing his duties was of the peculiar nature that he did not create the enmity of the law-breaker but on the other hand instilled friendship.” Then or now, that is an odd statement. In his Outside lawman tenures, Sturgus’ reputation was much harder, of a lethal shot who killed a criminal in Everett. He had earned the nickname “Black Jack.” But in late 1920, some locals claimed in the Times, “[Deputy U.S. Marshal Frank] Hoffman and Sturgus will be so busily engaged bucking the tiger that their minds will be in a state of coma” and unable to enforce the law. “Bucking the tiger” refers to gambling at faro, a card game that was generally more popular than poker in the West until the early 20th century.

The Marshals and Sturgus’ quickly appointed replacement were the only on-hand force capable of investigating the crime. But five days after the murder, they had found no evidence of any tangible kind. Reports from Seattle told a wilder version of events, claiming Sturgus had been “surrounded by a number of moonshiners, beaten to earth and shot with his own gun.” The city council and mayor offered a combined $1,950 (about $28,000 in 2020 dollars) reward for information, but it was never claimed.

It is also possible that Sturgus’ hands were not at full strength from the lingering effects of a late December operation on his left middle finger. But most of the speculation at the time focused on angry bootleggers. After all, Sturgus had recently raided several stills. The 1964 earthquake demolished several buildings on the north side of Fourth Avenue. Brian Porter, APD Chief from 1980 to 1986, was a patrolman then. In 1982, he recalled to the Times how Anchorage police officers discovered a basement packed with moonshining equipment, near the site of the murder. Regardless, no one was ever arrested for the crime, and Sturgus became Anchorage’s first unsolved murder.

Sturgus was paid $200 (roughly $2,900 in 2020) for his work in January 1921. The Anchorage Council agreed to pay his widow the same again as his February wages, explicitly noting the largesse was to be the only “death benefit,” Though, again, Sturgus had worked more than two-thirds of the month before dying on the job, so the gesture was more minimal than largesse.

During his short tenure, Sturgus represented the entire Anchorage police force. APD did not have its own car until 1930. That one was a used Ford, and a used car in Alaska at that time meant used rough. The department did not get a new car until 1941. The low pay, lack of support and danger made early Anchorage an undesirable law enforcement post for most. Sturgus’ replacement, Nathan Kitzmiller, lasted just over two years before a surprise resignation, what we would today call a return to the private sector. And his replacement, Harry Kavanaugh, lasted eight months in the position before also dying in a 1924 shootout. By then, the quality of local law enforcement had improved to the point of capturing Kavanaugh’s murderer.

What do you think happened to Chief Sturgus?

Correction: John Sturgus’ date of birth was noted incorrectly in a previous version of this story.