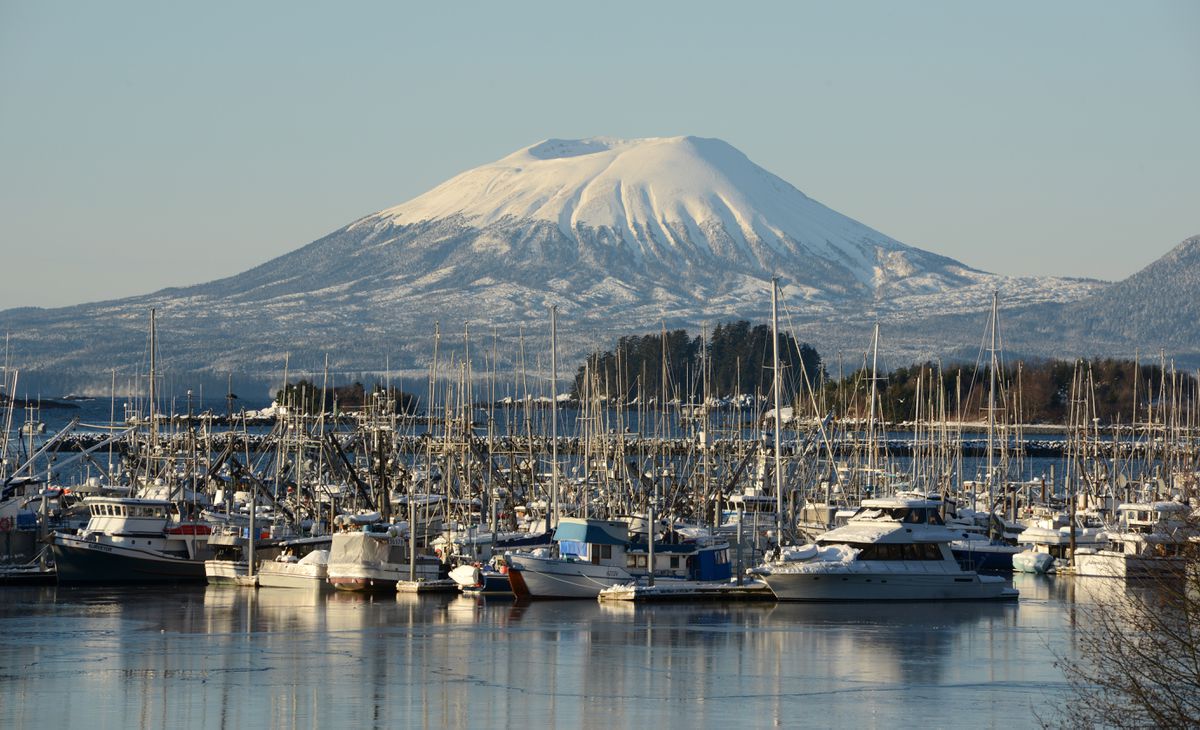 While April Fools’ Day pranks were muted this year, this is still an opportunity to recall the greatest April Fools’ prank in Alaska history. Some of you will know the story, but for others, it’s a rite of passage in Alaska to learn about the 1974 Mount Edgecumbe prank. And it’s all true.

Mount Edgecumbe is a dormant volcano on Kruzof Island in Southeast Alaska, directly across Sitka Sound from the town of Sitka. It last erupted more than 4,000 years ago. But on April 1, 1974, smoke once more rose from the volcano’s peak, startling locals.

The phones rang nonstop at the police and radio stations. The Coast Guard sent a helicopter out to investigate. When the pilot arrived, he looked down not upon lava or some smoldering caldera, but a pile of burning tires and a spray-painted April Fools message.

The architect of this prank was Oliver “Porky” Bickar (1923-2003), a World War II veteran who survived the storming of Normandy Beach. Bickar, then 50 years old, had lived in Sitka for 15 years at this point and was known for his showmanship. He was in the logging equipment business, and his favorite stunt was to cut a tree so that it hit a target on the ground, usually a hard hat.

The idea for the volcano prank came to him in 1971, and he spent the intervening years gathering tires and waiting for an April Fools' Day with clear visibility. Finally, in 1974, conditions were optimal, and he told his wife, "I have to go do it today." In the immortal words of wives everywhere, she replied, "Just don't make an ass of yourself."

Bickar and a group of friends tied the tires into two, 150-feet long rope slings. The conspirators took off in a helicopter hired out of Petersburg loaded with one of the slings, smoke bombs, diesel oil, a gallon of sterno and rags. While the chopper returned for the second sling of tires, Bickar painted the April Fools' message in 50-foot letters. By the time they arrived back in Sitka, the smoke was already visible across the sound. The air-traffic controller told them, “the son of a gun looks fantastic.”

Bickar had informed the FAA, fire department and police about the prank. However, he forgot about the Coast Guard. So, their reaction and immediate investigation were authentic. Once informed, most Sitka residents thought the joke was tremendous. An Alaska Airlines flight leaving Sitka was diverted so that passengers could see the faux eruption. Even the admiral in charge of the Coast Guard in Alaska later told Bickar that the prank was brilliant.

The incident quickly became national news and remains a constant in lists of top pranks. Being the type of person that he was, Bickar designed a commemorative jacket featuring a plume of smoke labeled as Porky’s rising from Mount Edgecumbe.

In 1975, Alaska Airlines sponsored an Alaska Brag Contest. Bickar, of course, entered. His submission read, “On April Fools' Day, I hired a chopper and flew 70 old, kerosene-soaked tires on top of the dormant volcano, Mt. Edgecumbe, that looms over Sitka. I set the tires on fire, and the billowing black smoke created one hell of a commotion in Sitka. I dare you to top that April Fools' joke."

Surprisingly, he lost. The winner bragged about surviving a bear attack, but he also could have bragged that he was The Raven, one of Anchorage’s most prolific drug dealers. But that is a story for another day.