In 1918, a deadly outbreak of influenza reached Anchorage. Here’s how Alaskans responded 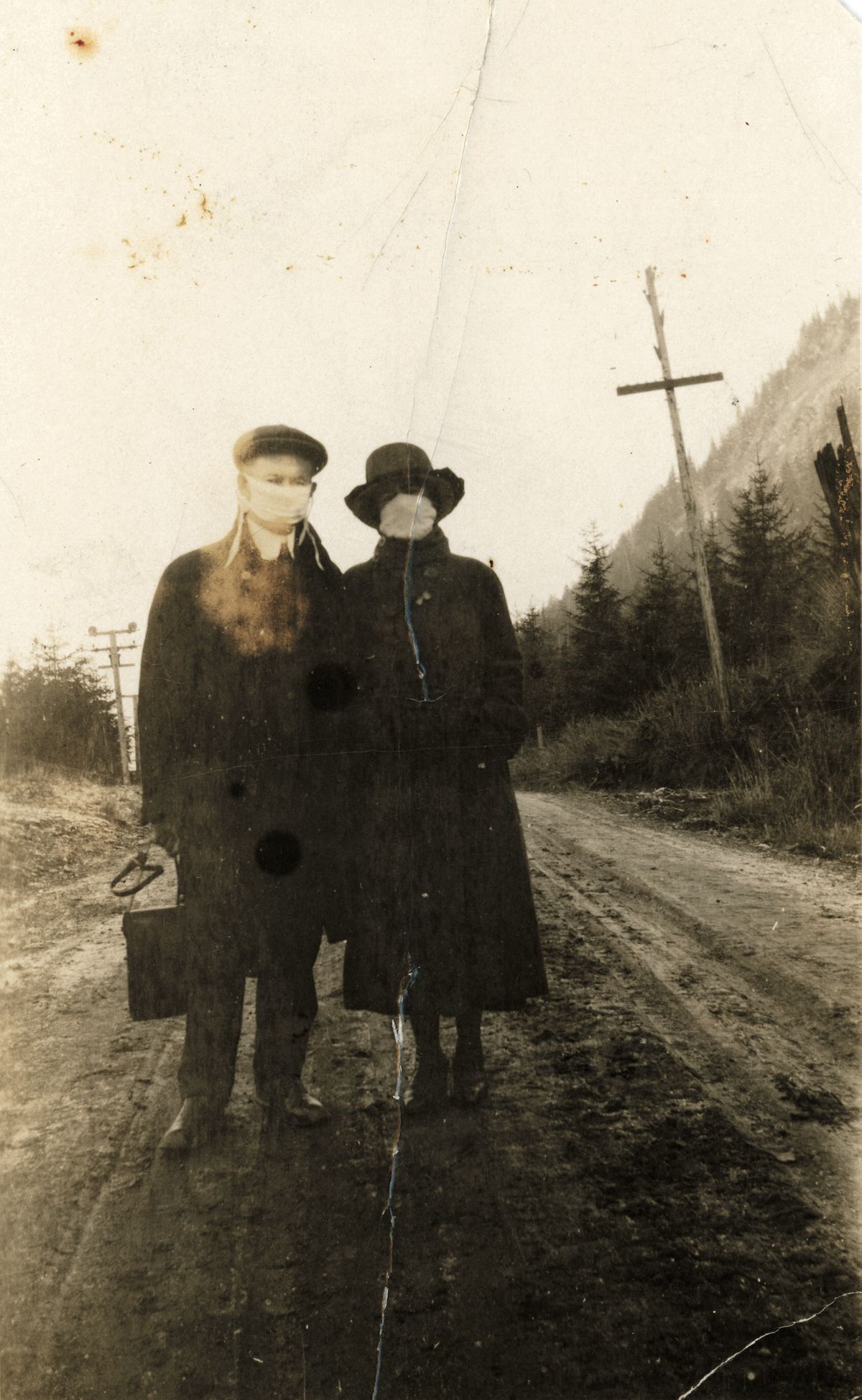 Around 10 a.m. on Nov. 11, 1918, news of the armistice that ended World War I reached Alaska. In Anchorage, church and school bells rang in celebration. All train whistles blew in joy. But the streets remained mostly empty. There were no cheering crowds or raucous parties, no parades or celebratory sermons. There was no public celebration. Instead, residents gathered in small groups within their homes, perhaps sharing a prohibited drink or two. Public gatherings — including schools, churches and theaters — were banned. Anchorage was under quarantine due to a pandemic.

The Spanish influenza, or Spanish flu, circled the globe from 1918 to 1919. Global death estimates range from 17 to 100 million.

The ongoing COVID-19 crisis is shaping the current Alaska understanding of epidemics, and there are numerous similarities, both shallow and revelatory, between the 1918-1919 Spanish flu and current pandemics. Most notably, those locales and individuals that abandoned practices that safeguarded themselves and those around them trailed greater death in their wake. Some Alaskans would have died of the Spanish flu regardless, but more died than were necessary.

In May 1918, the first news of a particularly virulent outbreak of influenza reached Anchorage, of a “mysterious malady which was raging through Spain the form and character of the grippe.” Alaskans commonly described what would today be called flu-like symptoms as a case of the grippe, a borrowed French term. An Oct. 25, 1918, Anchorage Daily Times article offered the contemporary understanding of the symptoms: “The disease is characterized by excessive sneezing, reddening and running of the eyes, running of the nose, chills followed by fever of 101 to 103 degrees, aching back and joints, loss of appetite and a general feeling of disability.”

The Spanish flu spread in waves. The virus of that first wave, in the spring of 1918, while notably contagious, was not especially deadly, more akin to seasonal flu. Primarily due to its isolation, Alaska was not impacted by the first wave. But in August 1918, a mutated and deadlier version of the Spanish flu appeared in Europe and began winding its way around the globe. On Oct. 9, 1918, Alaska Gov. Thomas Riggs wrote in his diary of “disturbing reports concerning Spanish influenza.” The pandemic, including its accompanying terror and death, had finally landed in Alaska.

Through late October 1918, Anchorage officials publicly downplayed the significance of the Spanish flu. The Anchorage Daily Times was the loudest mouthpiece for what could be called either damaging propaganda or valid attempts to prevent a panic. On Oct. 21, the Times claimed, “Old Jack Frost sure put the crimp into Spanish influenza that is raging in the states and Anchorage is immune.” On Oct. 29, the newspaper passed along the advice of local doctors: “Don’t be alarmed over influenza in Anchorage; there is none and what seems so is just ordinary, common every-day grippe.”

The doctors were wrong — either misinformed, misguided or lying. Only two days later, on Oct. 31, the Times announced that the newly created Anchorage health board had canceled all public gatherings due to the “epidemic of la grippe now prevailing in the community.” All public schools, churches, and theaters were closed. Even then, local doctors claimed the virus in Anchorage was not “a virulent form.”

After Nov. 11, passenger trains between Anchorage and Seward were canceled. A few days later, a new Territorial edict required all travelers to obtain a "health certificate from some physician that you have already undergone the siege with the flu before you will be permitted to travel.

Contrary to the published opinions of local doctors, the virus making its way through Anchorage was not the everyday cold or flu. It appears the first to die in Anchorage of the Spanish flu was Ed Walker, who worked as a shoeshine at the Central barbershop. The 30-year-old Walker, who as African-American, died Nov. 3.

The virus took the weak. Alex Jack, a “hunchback” Alaska Native youth, died on Nov. 8. The virus took the strong. After the death of “big, strong, robust” John Strom on Nov. 19, locals realized the Spanish Flu was “no respecter of persons,” of one’s muscles or ruggedness. The virus took men and women, including Mary Gold on Nov. 29. Her husband ran a dry goods store on Fourth Avenue; he sold out and left Anchorage early the next year. The virus cared little for age, killing both the 50-year-old Chief Stepan and his 18-month-old child.

In 1918, there were neither flu vaccines nor antibiotics. The primary treatment was convalescence and a pain killer such as aspirin. During the outbreak, Loussac’s Drug Store advertised “To Avoid the influenza, take a box of our Cold Tablets and a bottle of Pine Balsam with Menthol and Eucalyptus.” Other local remedies pushed by pharmacists included quinine, Dover’s Powder [a painkiller], hot water bottles, saltwater gargles, cod liver oil and “abundant food.”

At best, these measures treated the symptoms. At worst, some of these remedies were health risks on their own. The most common active ingredient in cold pills at this time was phenacetin, banned in 1983 as a carcinogen and for damaging kidneys. Dover’s Powder was a cold drug with the active ingredients of an expectorant, opium and morphine. Quinine does not affect flu viruses, but higher dosages caused vomiting. The aspirin regimen suggested by national authorities was enough to increase the amount of fluid in lungs and cause hyperventilation. Thus, aspirin may have prompted more deaths during the pandemic.

By the end of November, the virus had burned out in Anchorage. On Nov. 26, the Anchorage board of health lifted the “flu siege” and permitted public gatherings. The local quarantine in Anchorage, described initially as a “precautionary measure,” appeared to work. While 28 people died in Anchorage that month, no subsequent deaths in town were linked to the Spanish flu. Elsewhere in Alaska, the virus raged longer and was more deadly.

The path of the virus in the Mat-Su region stands in notable contrast to Anchorage. While the spread of the pandemic was curtailed in Anchorage, it was actively spread in Mat-Su. The Alaska Engineering Commission (AEC) pressed forward with the construction of the Alaska Railroad, even as they carried the disease into Alaska Native villages. Per the Alaska Railroad Record, “At times, all the Indians in some of the villages were down with the illness, and the sick were cared for and the dead buried by Commission employees.”

The Alaska Railroad Record is a dispassionate witness. In November 1918, it noted that “construction work was materially retarded” due to the pervasiveness of the Spanish Flu amongst both area Alaska Natives and railroad laborers. One Record article is titled “Influenza Epidemic Among Indians Cost Commission More Than $2000.” Of the 28 dead in Anchorage, eight were Alaska Native, and at least 11 of the remaining 20 were AEC employees.

One Ahtna narrative describes the discovery of a Spanish flu-depopulated village. “They went from village to village finding many of the villagers sick or dead from the flu. He told of rounding a bend and seeing a small boy standing on the bank sobbing. In the background the village appeared deserted. No smoke rose from chimneys, no children playing in the yards, and no campfires burned.” For Mat-Su area Alaska Natives, the Spanish flu was one of a series of post-contact epidemics, from smallpox in the 1830s through polio, scarlet fever, and other outbreaks in the decades to come.

Though the Times claimed Anchorage residents “willingly complied with the regulations imposed,” the reality is that Alaskans everywhere chafed at the restrictions. Territory-wide, businesses, especially steamship companies, protested that quarantine edicts threatened their continued existence. Prominent Alaskans petitioned the governor for travel exemptions. All such petitions were denied.

This resistance is both relatable and deadly. Skagway provides the most illustrative example. On Feb. 21, 1919, Gov. Riggs wrote in his diary, “Skagway today partially lifted its influenza quarantine.” Just more than a month later, on March 25, Riggs wrote, “More influenza. This time it is at Skagway. On the 23rd it broke out with 40 cases yesterday 50 cases and one death. The only doctor in town is down with it.”