From Wally Hickel to Miss Wiggles, the storied history of Anchorage’s first cemetery 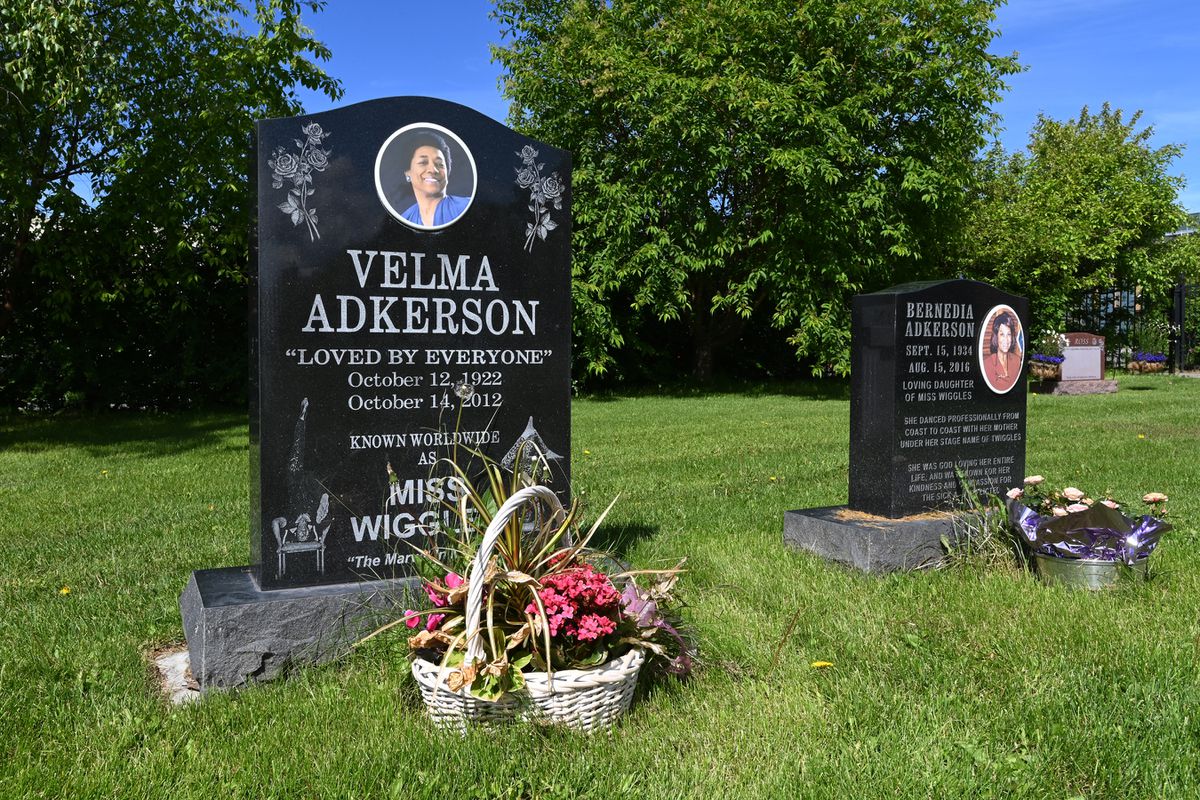 Velma Adkerson, a performer who went by the stage name 'Miss Wiggles' rests next to her daughter Bernedia Adkerson who was known as 'Twiggles' at Anchorage Memorial Park Cemetery on Sunday, June 21, 2020. (Bill Roth / ADN)

Velma Adkerson, a performer who went by the stage name 'Miss Wiggles' rests next to her daughter Bernedia Adkerson who was known as 'Twiggles' at Anchorage Memorial Park Cemetery on Sunday, June 21, 2020. (Bill Roth / ADN)

Anchorage Memorial Park, the downtown cemetery, dates to city founding. It is the rare relic in town that survived through the decades of fires, earthquakes, progress, indifference, booms and busts. The interred are as varied and colorful as Anchorage’s history, from a Civil War veteran to a shaman with weather powers, from pandemic victims to mayors, and from a governor to an exotic dancer. Nothing still standing in Anchorage is as well connected to the entirety of city history.

Anchorage Memorial Park was the city’s first official cemetery, established by President Woodrow Wilson on Aug. 31, 1915. A 1922 President Warren Harding order transferred the property to the city of Anchorage with the land reserved for burials. At first, the cemetery was simply called the Anchorage Cemetery. By the 1940s, it was increasingly called the Anchorage City Cemetery. And in 1968, it was officially renamed Anchorage Memorial Park.

In 1918, President Wilson’s Executive Order 2836 ensured that cemetery plots would be freely available to residents. Burials began by 1917 at the latest, though cemetery surveys weren’t completed until 1919. Undertakers employed steam machines to warm the earth for graves during the long winters. The 1918 order also allowed fraternal and religious organizations to purchase tracts of lots, beginning in November 1920 after the cemetery plat was was certified.

Since city founders gave much thought to the cemetery and little for recreation or parks, a 1917 observer claimed, “Anchorage has been figured to be a place to die in, but not much of a place to live in.” But while the Anchorage Cemetery appeared well planned, the day-to-day preservation was lacking. The property division also divided responsibilities. Through the 1970s, maintenance fell to tract owners. Into the 1980s, neglected graves and overgrown patches of weeds riddled the cemetery. Many graves were unmarked and forgotten.

[Related: For Anchorage cemetery director, death is a part of life]

When later city officials gave any thought to the cemetery, it was usually to dream of its potential property value. Given its prime location near downtown, many developers and politicians suggested that the cemetery might be relocated, perhaps in favor of a civic center. In the early 1950s, city planners strongly considered constructing a new cemetery near Goose Lake, going so far as to obtain Department of Interior approval for the land purchase.

However, city officials repeatedly balked at the cost of moving a cemetery. In 1967, the city attorney estimated a $1.6 million cost for the move, about $12.3 million in 2020. That was 3,200 graves at $500 each, based on a Seldovia cemetery relocation.

As the cemetery deteriorated, the location was also burdened by one of Anchorage’s most notorious urban blights, the Willow Park Apartments, a low-income housing complex created in 1952 when unused cemetery land was transferred to the Alaska Housing Authority (later called the Alaska State Housing Authority).

Dedicated in 1953, Willow Park Apartments was meant to be one answer to the city’s severe housing shortage but quickly devolved into a poorly maintained public eyesore and safety hazard. During a 1988 fire, resident Lorena Adams died of smoke inhalation. Her 5-year-old son barely survived. Another tenant leaped from his window and suffered severe injuries. Adams was the fourth fire casualty in two years at Willow Park.

By this time, the cemetery was rapidly approaching its capacity, after which the city would have no public burial space. In 1988, ASHA razed Willow Parks, and in 1990, the land was officially transferred back to the Municipality and set aside for cemetery use.

The cemetery’s recovery from decades of neglect required years of work and a patron saint, John Bagoy. Born in Anchorage to the Bagoy’s Florist founders, he operated an electrical supply store until his 1977 retirement. In 1982, his mother, Marie, died and was buried in the Catholic tract of the cemetery. He saw the neglect firsthand and felt forced to act.

First, he identified 366 unmarked graves within the Catholic Tract over three years. Then, he worked with cemetery director Dan Warden to map the cemetery and identify the nearly 3,000 remaining unmarked graves. He initiated the ongoing cemetery solstice tours, advocated for the transfer of the Willow Park Apartment land back to the cemetery, and successfully submitted Anchorage Memorial Park for the National Register of Historic Places. In 1990, he wrote in the Anchorage Times, “I can honestly say to the best of my recollection, which is over some sixty years, that this historic site has never had better care and received more attention than that given today.”

Hickel, also Secretary of Interior under President Richard Nixon, frequently joked that he wanted to be buried upright. One friend claimed that the former boxer told him, “I want to be buried standing up, so when I get to heaven, I can come out fighting.” When Hickel died in 2010, his family respected his wishes. Always wary of outside interests controlling Alaska, Hickel was buried vertically and facing toward Washington, D.C., so he could keep an eye on things. In 2017, Ermalee Hickel died and was also buried upright alongside her husband.

Today, Anchorage Memorial Park Cemetery is once more running out of space. At the current pace of burials, there will be no public space available in seven years. Still, a walk through the cemetery remains an excellent way to spend a few minutes and connect with city history.