In new documentary, ‘rewilding’ a home painstakingly crafted in the Alaska Bush 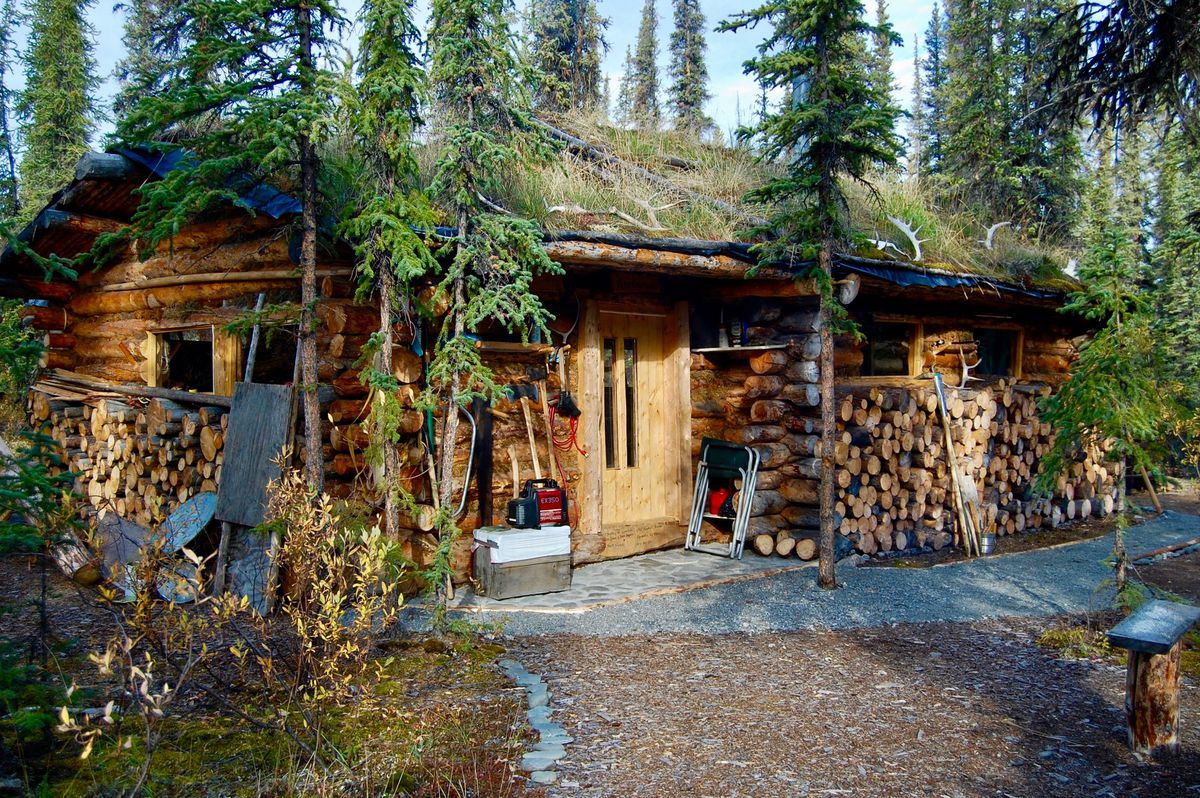 This week, 360 North will screen “Rewilding Kernwood,” the concluding documentary in a trilogy by Jean Aspen and Tom Irons. Their story is one of the many family tales about leaving civilization to build a cabin and live in the Alaska Bush. Because of the way they lived and how they left, this story is unlike any other.

It begins with Aspen’s early childhood in the wilderness. “My belonging to wild places and the urge to explore my dreams was a legacy from my parents,” Aspen said in a recent interview.

Her story was featured in a story in the 1953 issue of Life Magazine (”Back Home to the Arctic: A couple that fought wilderness now embrace it and settle down”). One full-page photo pictured 2-year-old Aspen on snowshoes, toddling behind her mother. In another, she watches her father skin a polar bear at the family’s camp on the pack ice. She was also featured in the 1953 documentary “Jeanie of Alaska,” shown on national lecture tours.

The filmmakers were her parents, Bud and Constance Helmericks. Readers of Alaska adventure know the Helmericks through their books about their explorations in Alaska’s remote Brooks Range and along the North Coast, including Connie’s 1944 book, “We live in Alaska,” and Bud’s 1969 “The Last of the Bush Pilots.”

In 1972, Aspen took a break from college and with her boyfriend, Phil Beisel, canoed down the Yukon River and lined upriver into the Brooks Range, where they built a cabin and lived off the land for almost four years. It was through her book about this experience, “Arctic Daughter: A Wilderness Journey” that I first came to know her. She told me that she chose the name Aspen, “because unlike spruce trees, aspens are always changing.”

In 1990, Aspen, her husband Tom Irons and their 4-year-old son Lucas paddled down Aspen’s “familiar old river,” stopping to visit her old cabin site. Around campfires, they talked about their dreams. One evening, camped at a spot they would later call “Kernwood,” and they imagined returning to build a cabin.

There were good reasons to leave the idea of living in the Bush to the realm of memory and dream. Irons was 44 and had never lived in the wilderness; Aspen was 40, soft and a bit chubby now. They had little in the way of savings and would have to sell much of what they owned. “Letting go of security was like prying my fingers from a ledge,” Aspen said. The venture didn’t seem sensible, “But we burned our bridges and never looked back,” Irons said.

They returned in the spring of 1992 for a year-and-a-half sojourn. A chartered bush plane flew them to Kernwood with everything they’d need for building “a woodcutter’s cottage out of a fairytale.” But this time, “We didn’t come to live off the land,” Jean said, “but to live with it.”

The family decided to cut no living trees — an ethic they lived by for the next 26 years. Over those years they would have to travel further and further upriver to find and cut the right trees, carry them to the river, then raft them back to Kernwood. Their standard required more work and strain on aging bodies, but the effort provided the satisfaction of minimizing their effect on “the community of life here, of which we became a part.”

The family brought most of their food with them but caught grayling and pike and harvested six moose over the years. Wildlife became accustomed to their presence and seemed to be drawn into their yard. A pair of weasels would scamper over their feet and follow them around. Gray jays landed on their shoulders. For nearly 20 years, a raven family, “the Blackhearts,” were their curious neighbors. A white wolf sometimes denned across the river. They lived in respectful peace with “Goldilocks,” a grizzly bear who occasionally investigated their yard. “When one lives harmlessly in nature,” Jean said, “the land knows.”

While preparing for the move, the couple had borrowed money to buy professional video equipment and taught themselves to use it. They wanted to share their experiences and whatever insights might emerge. “Arctic Daughter: A Lifetime of Wilderness” and “Arctic Son: Fulfilling the Dream” are the first two of what has become a trilogy of documentaries. All chronicle life in the wilderness, but their message is more about families, dreams and living purposefully. “We hope to inspire others to live authentic lives, honor the Earth, and be kind to one another,” Aspen said

Between stays at Kernwood, Aspen finished a nursing degree and worked as a travel nurse. Irons worked in hospice. At 17, their son Lucas set out to obtain a degree in nursing, later taking a position in Washington. Irons and Aspen settled into a rural Alaskan community with a small hospital, where Aspen got a job that enabled them to return to the river every summer.

But each year, their knees and backs sent more reminders that the couple’s days of carrying logs, hauling water and backpacking the high ridges were limited. The time was coming when the demands of Bush life would exceed their capabilities.

When Aspen and Beisel left their cabin in 1976, they had followed “the old Alaskan standard” of leaving it set up for others to use. However, when Aspen’s family floated by, they were saddened to find the deteriorating cabin surrounded by gas cans and the trash of airplane hunters. They shuddered to think of that future for Kernwood.

“Alaska has become a different place and it’s a different world now,” Aspen said. In the 1970s, she seldom saw planes. Now, every fall, hunters and hunting guides arrive in numbers: flying the river, spotting game and sometimes illegally shooting the same day or wasting meat. Irons and Aspen reported violations and cleaned up messy camps along the river. “We became concerned that Kernwood would be used as a portal for exploiting the area,” Irons said.

“And humans are rapidly changing the planet,” Aspen added. “Tom and I came to view our relationship with Kernwood from this larger perspective.” The couple tells of how the river and creek have warmed, ice is forming later, there’s more smoke from forest fires, the permafrost is melting, and muskegs and ponds are drying up. “Human behavior is degrading the systems that support life,” Aspen said. “We need to recognize that we each change the world by the choices we make.”

In the summer of 2015 these concerns led Tom and Jean to a decision: They would “rewild” Kernwood, then leave. “We decided to give the land back to itself,” Tom said. Rewilding meant dismantling the cabin and other structures they had painstakingly built, removing everything not natural to the area and replanting the ground with sod from the roofs.

I visited Kernwood, and mentioned that it seemed a shame to tear down such beautiful work. Irons had become an artist with logs; seldom had a bush cabin exhibited such whimsy and artistry. It was a bittersweet decision, he explained. “Yes, we’ll miss our life here,” he said, looking out over the river. “But dreams have a lifespan. We feel it is our responsibility to restore the area’s wildness while we are still physically able.”

In 2016 they began by taking down the storehouse. The following year they dismantled their cabin, and by the fall of 2018 the bakehouse/smokehouse, outdoor kitchen and outhouse were all gone. They pulled every nail and backed out every screw. Logs with spikes that couldn’t be pulled with a crowbar were split and burned for firewood. Others were carried down to the river so, as Irons said, “they could continue the journey we interrupted when we borrowed them.” They were carried, not dragged, because “the vegetation here is delicate and heals slowly.”

They carefully cut sod from the roofs and used it to revegetate areas where the buildings had stood. Aspen spent countless hours on hands and knees preparing the disturbed ground by burying cabin logs with wet composted sawdust, chinking moss and dirt. Then she meticulously fit each piece of sod over the irregular surface to restore the tundra mat. A few rotting logs were carefully inserted to mimic nature and support growth.

During their final years, they flew out about 8,000 pounds of supplies, metal, tools, and books for recycling and reuse, using each flight that came in to also take things out. Nothing that wasn’t native to the area was left behind. “We never had a trash pile,” Irons said, “and we were always careful about what we brought in.”

On July 24, 2018, they floated downriver one last time. Now, it’s hard to tell that Kernwood had once existed—except for one thing: facing the place where the cabin had been, a rocking chair, crafted from a single dead tree, remains. “I couldn’t bring myself to take it apart,” Irons said, “so we left it as a memento to the years we spent there. It’s only wood, so it will return to the Earth.”

“We should strive to enrich the future, not use it up,” Aspen said. “The children of tomorrow don’t need our moldering edifices. They need a healthy, living world in which to envision their own dreams.”

For more of Jean Aspen and Tom Irons:

Their earlier documentaries are available at jeanaspen.com. Also available are Aspen’s books, “Arctic Daughter,” “Arctic Son,” and “Trusting the River.” Aspen is currently working to get six of her mother’s early books back into print.