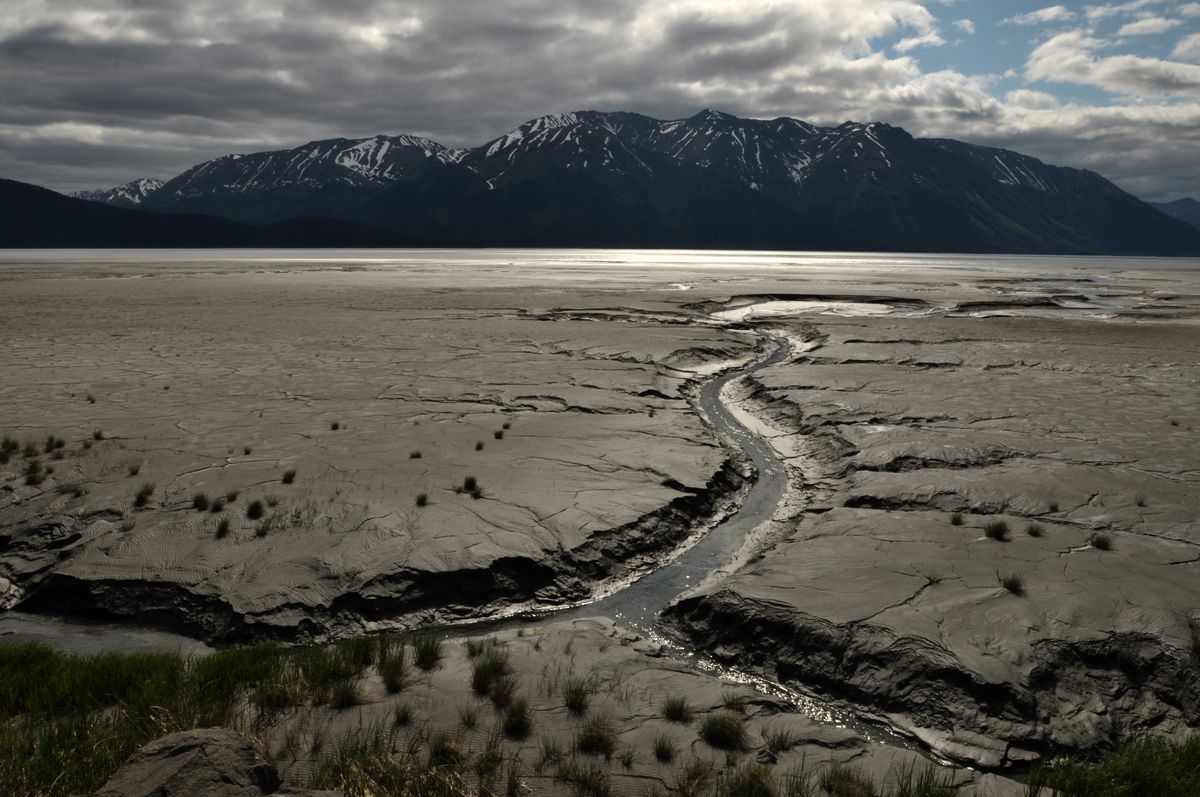 The mud flats of Turnagain Arm with the Kenai Mountains along the Seward Highway on Thursday, June 9, 2011. (Bob Hallinen ADN)

The mud flats of Turnagain Arm with the Kenai Mountains along the Seward Highway on Thursday, June 9, 2011. (Bob Hallinen ADN)

The deadly mudflats that line Cook Inlet, Turnagain Arm and Knik Arm are the setting for some of the most enduring and gruesome Anchorage urban legends. All the stories begin with an unlucky soul wandering too close to the water and becoming trapped in the quicksand-like mud. From there, victims either drown in the rising tide or are ripped in half by a rope attached to a helicopter.

People have indeed died on the mudflats, but the reality is far more horrifying and haunting.

Though similar to quicksand, the local mudflats are unique. A geologist explained the science of the mud to the Anchorage Daily News in 1988: “The grains are highly angular. When they’re deposited, they’re in contact with each other in a delicate balance. When you step on it, you cause it to become more mobile. Then, when it resettles after you’ve disturbed it, it tends to be more compacted around your foot. The grains are so angular that they’re just locked together.”

While the mudflats are extremely dangerous to traverse, stepping onto the mud is not an automatic death sentence. Some Alaskans have survived walks across Turnagain Arm, or from Anchorage to Fire Island and back. Most who sink in the glacial silt are successfully rescued, but the survival rate says more about the skill and zeal of the rescuers.

In recent decades, actual deaths have been few, though they serve as gruesome warnings. As reported in the Anchorage Daily News, July 16, 1988, newlyweds Adeana and Jay Dickison went gold dredging around Turnagain Arm’s eastern end, near Portage. The 18-year-old Adeana tried to push their ATV out of the mud, became stuck herself, and eventually drowned in the rising tide. Her attempted rescuers waited for the tide to recede to allow them to recover her body hours later.

In 1978, an Air Force sergeant tried to walk across Turnagain Arm at low tide. He badly misjudged the environment and his abilities; the bore tide swept him into the Inlet (Anchorage Times, July 16, 1981). His body was never found. In 2013, Army Captain Joseph Eros, an experienced outdoorsman and Harvard graduate according to the Anchorage Daily News, tried to walk between Kincaid Park and Fire Island with a friend. The friend lived, but Eros died.

The primary source for the legend of Anchorage’s deadly mudflats is Roger Cashin. According to the contemporary Anchorage Daily Times coverage, on Sept. 17, 1961, the 33-year-old soldier walked onto the Palmer Slough flats south of Wasilla with three soldier buddies. Cashin walked a little too close to the water and began to sink.

According to a 1981 Anchorage Times piece looking back at the incident, Cashin’s friends initially thought his predicament was hilarious. They stood on the bank and laughed at him. Their reactions are easy to imagine, especially for stationed soldiers unfamiliar with the local landscape. They surely mocked him and promised to tell tales back on base -- the mighty soldier defeated by a muddy beach. By the time a local hunter, M. C. “Doc” Puddicombe, arrived on the scene, Cashin was hip-deep in mud with the rising tide nearly to him. If the soldiers had treated the situation seriously from the beginning, they could have easily saved him.

The tragic errors continued, according to an interview with Puddicombe in the 1981 Times article. One of the soldiers finally left for help but drove to Wasilla instead of stopping at the nearest home. A helicopter was called, but the pilot misheard the instructions. Instead of “up to his neck,” he heard “up the Knik” and flew several miles the wrong way. A passing seaplane saw the spectacle and attempted to land, though Puddicombe waved him off. The brand-new Sea Cub flipped in the frigid water.

Meanwhile, the assembled could see the helicopter in the distance circling over the Knik River. Puddicombe dispatched one of the soldiers to light some nearby brush on fire, which might have signaled the helicopter over sooner.

“And can you believe it,” Puddicombe told the Times, “the one guy first dropped the match in the brush and then tried to pour on the gas. It blew him several feet backwards, the dumb (expletive).”

While Cashin held onto the edge of Puddicombe’s boat, the hunter took the barrel off his shotgun, thinking Cashin could breathe through it as the tide rose. But makeshift snorkels are material for cartoons or Hollywood. Cashin by then was shaking violently in the icy water, too hypothermic to hold the barrel or breathe steadily. Puddicombe, his two young sons, and the other soldiers nearly died themselves in the cold water but finally had to watch Cashin drown before their eyes.

One moment Cashin was there, alive, and in another was covered in the silty water. “He did not ask us to shoot him,” said Puddicombe. “That is bull, he was a pretty good man, and he fought to the end.”

The terror from that day haunted Puddicombe and his family for decades, he told the Times. For many years, his sons refused to return to the flats. One had frequent nightmares, screaming, “The mud! The mud! The mud!” in his sleep.

The day after Cashin’s death, a helicopter attempted to lift the body out, but the cable snapped. The day after that, army engineers built a platform out to the body and recovered it “in a manner best not described here,” according to the Times. Cashin’s story, including the snapped cable and mangled corpse, is the primary source for local mudflat legends.

To live in Alaska is to be in constant proximity to many of nature’s potentially lethal representatives. Even in urban Anchorage, there are bears, moose, violent tides and, of course, killer mud. Lapses in respect, even a momentary lack of caution, can result in the ultimate cost.