A Washington cat named Panda sailed solo to Kenai. The story of how his family was found is strange too. 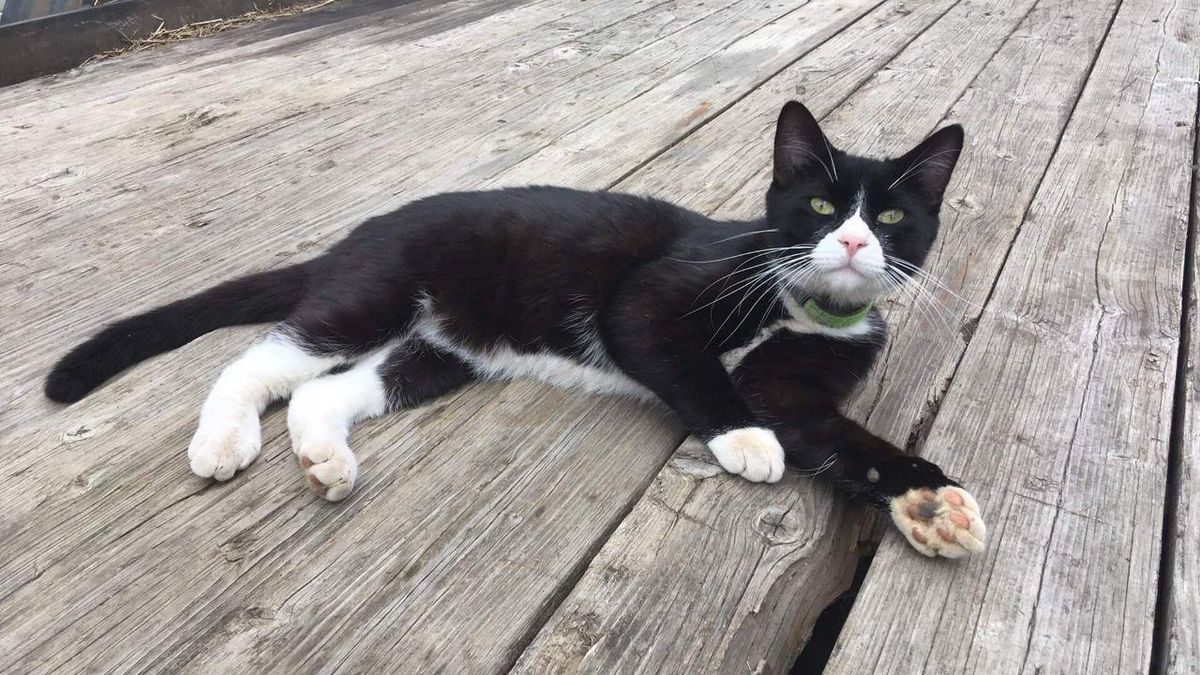 Panda went without food or water for over a week during his journey from Washington to Alaska. (Courtesy of Christina Clevenger)

Panda went without food or water for over a week during his journey from Washington to Alaska. (Courtesy of Christina Clevenger)

This article was originally published by public radio station KDLL and is republished here with permission.

KENAI — A Washington cat walks into a shipping container. More than a week and 2,500 miles later, he’s in Kenai.

It’s a story that could have ended in tragedy. But it didn’t, thanks in part to the help of some local businesses and the magic of social media.

Panda, a tuxedo cat, went missing from his home in Thurston County, Washington, in the Olympia area, on Oct. 13. His owners, Christina and Josh Clevenger, had been searching their neighborhood and posting in Facebook groups for over a week when they were on the verge of giving up the search.

On Oct. 24, Panda showed up bewildered and hungry in a shipping crate at the Kenai Home Depot. An employee posted his picture in a group for Seattle lost pets, which is where D.D. Ponder, also from Thurston County, saw him.

“I had been communicating with the owners of Panda for a few days and giving them advice and tips and whatnot on how to find their lost cat,” Ponder said. “And then, coincidentally, Christina’s aunt had noticed a post in another lost and found pets group up in King County and then we were able to determine that, in fact, this is definitely Panda. And how the heck he got to Alaska, we have no clue, but more importantly, how are we going to get him back.”

Clevenger was shocked when her aunt showed her the post.

"And was like, ‘Wasn’t Panda’s collar green?’ and I go ‘Yeah …,’ she said. “And she turns her phone around for me to look at it and she goes, ‘Isn’t this Panda?’ I dropped my phone, I dropped my poor little Chihuahua Annie, who was in my lap, I just … I started bawling.”

Aside from operating the lost pets group, Ponder is also the leader of United Angels, a Washington-based nonprofit that raises money for medical pet emergencies. United Angels got to work raising money to get Panda home, including costs for his flight from Anchorage and veterinary expenses.

Ponder said a Home Depot employee, who wanted to remain anonymous, took Panda to the Kenai Veterinary Hospital to get a health certificate so he could be cleared to fly. The clinic also updated his vaccinations and gave him a microchip.

That same employee offered to drive Panda to Anchorage from Kenai. But Grant Aviation offered to fly him for free.

“The morning of the flight, we heard from Grant Aviation that the trip was going to be complimentary,” Ponder said. “And that basically all the employees pulled together to make it all happen.”

They also got help from the Kenai Animal Shelter, which lent a kennel for transport.

“First of all, we don’t know how he got onto that container, from a 48 property in Rochester, Washington,” she said. “I mean, it’s farm country where he lives. And there are no semi trucks, I mean, not that they don’t drive by. But it’s not like they live close to a truck center.”

She thinks he could have gotten on a mail truck that was headed to a transit center, and from there may have jumped into a container.

“But, what we do know, is he was in that container for nine or 10 days,” she said. “It traveled to Kenai via a barge, and so he was stuck in that container for a week and a half — no food, no water. And dark and cold. And then to top it all off, we happen to find out about it. And for him to then, after all that traveling, for him to get home is just as crazy.”

One of the most surprising parts was that Panda fared just fine in that shipping container. He was hungry and scared but OK, Ponder said.

Panda is back with his owners and their eight other pets in Washington. Since he got back, Clevenger said he’s been a little grumpy.

“He’s definitely had to get readjusted. He’s not getting along with his brother cat, my cat Batman. And they grew up together, like they’re the only two that we didn’t have any problems with. But apparently he’s copped a little attitude on his little vacation. But other than that, he’s been amazing.”

Clevenger says she’s so grateful for everyone in Kenai who helped them get reunited. As for Panda, he won’t be leaving the house for a while.