In WWII, Talkeetna draft dodgers led the FBI on a wild chase by plane and dog sled 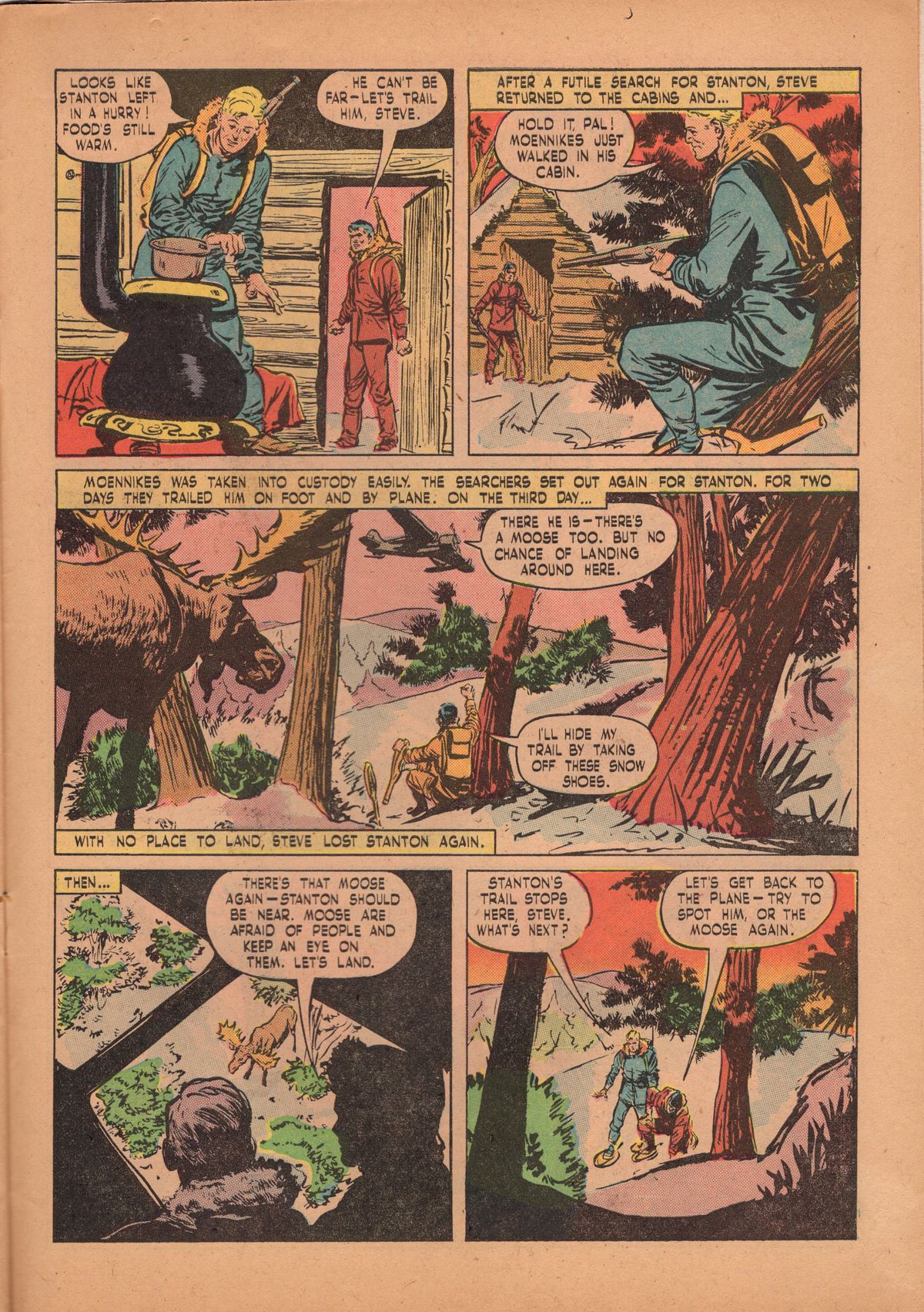 A comic book story was based around the story of FBI agents chasing and catching draft dodgers in Alaska.

A comic book story was based around the story of FBI agents chasing and catching draft dodgers in Alaska.

The Federal Bureau of Investigation was created in 1908, and for most of the first half of the 20th century maintained a minimal presence in Alaska. Due to budget constraints, the FBI opened and closed a Juneau field office twice between 1920 and 1938. During that time, their most notable case in Alaska was perhaps a 1930 murder near Ketchikan that was solved thanks to an incriminating can of sliced peaches. As there was no FBI office in the territory, Alaskans sent word to Seattle for aid.

The onset of World War II in 1939 led the FBI to establish a permanent base in Alaska, once more in Juneau. In 1944, that office was relocated to Anchorage. Though forgotten today, one of their most unique cases during the war was the capture of two draft dodgers near the base of Denali. While there was no role for a can of peaches, the FBI did receive some timely assistance from a curious moose.

The standout character in this story is Frank Moennikes, already a well-known, Talkeetna-area resident who became more locally prominent in the years after his capture. The German-born Moennikes moved to America in 1924 and made the journey north to Alaska in 1934. He found his way to Talkeetna, where he and two fellow Germans lived in the still-standing log building known today as the Three German Bachelors’ Cabin.

On June 28, 1940, President Franklin Roosevelt signed the Alien Registration Act, also known as the Smith Act, into law. All foreign nationals were required to register with the federal government. Moennikes did nothing. After his arrest, he claimed, “Everybody assumed I was a citizen and I didn’t correct them.” He added, “I hated to disclose myself as an alien after everybody came to accept me as a citizen. I had a good reputation and I wanted to keep it.”

To preserve his reputation, Moennikes went so far as to register for the military draft. He was classified 1-A, acceptable for military service, and ordered to turn himself in for induction. Many decades later, it is impossible to know with any surety what he was thinking. Maybe he thought the war would end quickly, and he would not have to serve. Maybe he thought he would be deemed unfit for service. Regardless, his charade fell apart at this point. He had no intention of enlisting and disappeared in June 1942. By August, the local draft board was seeking his whereabouts before finally turning his case over to the federal authorities.

After his capture, Moennikes claimed he would have willingly fought against Japan but could not raise arms against other Germans. His two brothers both served in the German army, and he further worried that news of his service would reach around the world and possibly endanger his family. Said Moennikes, “I don’t know just how the word gets to Germany but it gets there. When I was living in Chicago before coming to Alaska, my relatives knew all about how I was behaving and what kind of work I was doing whether I told them or not.” He added, “I’m the black sheep in my family and I am not going to bring any trouble to my parents or brothers.”

Draft evasion excuses came in a variety of unconvincing forms. The FBI once found a draft dodger hidden in a haystack. Their quarry swore, “I was just getting ready to give myself up.” Another draft dodger who hid on a farm said he had heard of food shortages and wanted to patriotically milk cows. Other dodgers offered jokes: “I was too busy dodging my wife to report.”

Moennikes holed up in a remote cabin on Cache Creek in the wilderness around Talkeetna. Whether his later excuses were genuine or not, he was willing to spend many lonely months avoiding the consequences of his actions. The time passed slowly, hours filled with hunting, fishing and reading. “I had a pile of magazines that dated back as far as 1926,” said Moennikes. “I read many of them five times. We never throw a magazine away out there—just pile them up.” He also visited another draft dodger, Harold “Bud” Stanton, located 10 miles away in his own backwoods cabin. As with most avoiding military service, Moennikes had no apparent endgame in mind.

Meanwhile, the FBI was well aware of Moennikes and his general, though not exact, location. The winter of 1942-43 arrived in time to prevent a manhunt. However, they wasted no time as the seasons changed. In March 1943, on the first day with favorable weather conditions, bush pilot Clarence Rhode carried an FBI special agent and an Alaska Game Commission representative north from Anchorage toward Talkeetna.

They quickly found and circled Moennikes’s cabin. Two dogs were tied to the door, but no one came outside to wave at the plane, as was the Alaska custom. The search continued elsewhere, but the party soon returned to investigate the cabin on foot. It was now empty with a fresh dog sled trail pointing west.

Back in the air, the FBI-led team found Moennikes after crossing the Kahiltna River. The hunters circled their prey and dropped a message. He was to disarm himself and head back to the Kahiltna where the plane could land. Instead, he abandoned his dogs and made a mad dash into the woods, up a steep embankment and toward Stanton’s cabin at Chelatna Lake. Agents already on the scene captured him as he approached.

The agents had arrived shortly before while Stanton was nearby cutting wood. The other draft dodger instantly fled with no supplies or equipment. He hiked through the subzero night, breaking into cabins along the way for supplies. For two days, he zigzagged across the countryside avoiding traps. Agents almost caught him at another cabin, this time while cooking his first hot meal in days. After Stanton escaped again, agents ate his food. A note left behind said, “I’m going to Hell now. If you want to know where that is, follow my tracks.”

Stanton continued toward the mountains dashing from tree to tree for cover. Rhode circled in the air as agents on the ground attempted to flush Stanton into the open. Then, as Rhode circled near the Yentna River, he noticed a moose ignoring the plane and staring intently at a group of trees. Angling closer, he finally saw their man. The agents approached and eventually discovered Stanton huddled into a sleeping bag, intent on waiting out the hunt.

In all, the federal agents made 27 landings and mushed for 32 miles in their hunt for Moennikes and Stanton. Like many captured criminals, Moennikes immediately expressed regret for his actions, saying he was “ready to face the music.” This change in attitude conveniently came when he was already in custody, after months of hiding and days after attempting to evade capture. He coincidentally declared, “When you begin living a lie, it leads to more and more lies.”

Moennikes was indicted on three charges: violating the Selective Service Act, failing to register as an enemy alien and perjury. By itself, the failure to register as an alien carried penalties of up to 10 years in prison and a $10,000 fine, more than $150,000 in 2021 dollars. Despite the extreme lengths of the chase, Moennikes and Stanton were each sentenced to only a year at the McNeil Island federal penitentiary near Tacoma, Washington.

Through the rest of the war, the FBI occasionally cited the Moennikes and Stanton manhunt as an example of how far they would go to close a case. The chase even became material for a comic book, the February 1946 issue of the True Comics anthology. Though not exactly flattering, “The Case of the Tricky Draft Dodgers” marked one of Alaska’s earliest portrayals in comics.

During World War II, the FBI closed nearly half a million cases of draft evasion. Most offenders were channeled into the armed forces. Moennikes and Stanton were two of the more than 12,000 individuals sentenced to prison terms for dodging the draft.

After serving his sentence, Moennikes quickly returned to Talkeetna. His issues with the American military seemingly passed without making a dent in his local social status. He and a partner bought the Fairview Inn, converting the lobby into a bar circa 1951. He managed the Inn through several changes in partners until selling out in 1973. In 1953, he was naturalized as an American citizen.

Late in life, after decades of life in Talkeetna, an Anchorage reporter asked Moennikes if he had seen a lot of changes in the small town. Moennikes replied, “No.”