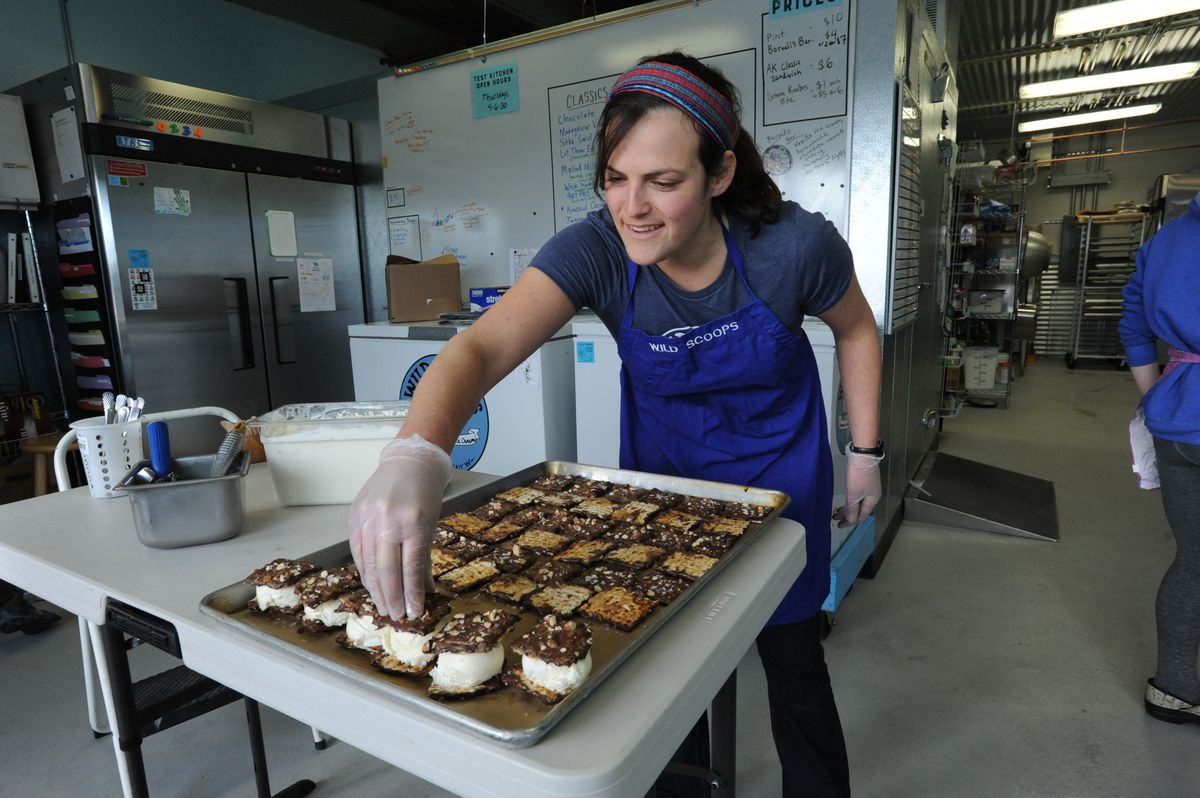 Tucked in the heart of Fairview is a strip mall with serious foodie flair.

Wild Scoops Homemade Alaskan Ice Cream, Alaska Pasta Company and Alaska Sprouts have set up production in the same building on the corner of 15th Avenue and Gambell Street.

SJ Klein, owner of Alaska Sprouts, bought the building in 2014. Since 2009, Klein has rented space in Spenard from former Alaska Sprouts owner Bernie Sauphanavong. As the business grew — providing fresh sprouts and other microgreens to restaurants and grocery stores around Anchorage — he said he realized he had two options: buy the building he'd been renting or find his own space.

So when the strip mall in Fairview came up for sale, he jumped on it and immediately went to work tracking down other food-oriented tenants to move in with him.

Klein has remodeled most of the unassuming strip mall. Corrugated metal siding has replaced much of the building's exterior. Construction is still underway for Klein's sprout business, with plans to finish this summer.

The Fairview neighborhood isn't known as a food hub. But Klein is happy to be doing business there.

"For what it is, the property especially in that Ingra-Gambell corridor, is great value if you're willing to do the work and be there and make something happen."

And it happened that both Wild Scoops and the Alaska Pasta Company were looking to expand.

Elissa Brown, owner of Wild Scoops, had been making 10 to 12 gallons of ice cream a day in commercial kitchen space rented at Mad Myrna's since May 2015. But her business quickly outgrew it.

Before the move, she was constantly running a single ice cream machine capable of making less than a gallon at a time. A 5-gallon churn was hard to fit in the commercial kitchen space at Myrna's. She used three small chest freezers for storing the ice cream.

Now at the new space, the Wild Scoops "test kitchen," there's a walk-in freezer with the capacity to store hundreds of pints.

The test kitchen is only open to customers once a week. But having the Gambell space will allow Brown to start a "scoop shop" downtown off E Street that will be open daily this summer.

"There was no way we could open without (the test kitchen)," Brown said.

Finding affordable commercial kitchen space in Anchorage is tough, Brown said, so when Klein told her space was available, she went for it.

Plus, she likes the idea of collaboration. Her ice cream flavors will sometimes have pieces of cakes and cookies from Fire Island Rustic Bake Shop mixed in. She has a seasonal ZIP Kombucha sorbet and a "Sitka Swirl" flavor that uses sea salt made in Sitka.

She and Klein have been talking about some sort of basil-based collaboration, once Klein starts operating.

Matt Martell plans to expand the Alaska Pasta Company, too. The local pasta manufacturer has focused mostly on wholesale customers since it was started in 1987 by Martell's father, Verne. For years, the company has made pasta for restaurants like Orso and Suite 100.

When Martell took over the business from his father in December, both had the vision of adding more retail. Last summer, they started selling pastas at the South Anchorage Farmers Market. It was successful, Martell said, and they began planning a storefront.

An empty display cooler sat in the front of the company's kitchen Thursday. Martell said about one person comes in a day to buy pasta, which he keeps stored in freezers and refrigerators.

Martell said right now traffic is based mostly on word of mouth, but he expects more once the summer hits and they return to the farmers market.

He's already heard from friends who've spotted the pasta company sign as they've driven along the busy street. Before, the company operated in a small commercial warehouse off Arctic Boulevard.

"We definitely view (the new location) as an improvement over Arctic," Martell said. "We're not tucked away in a corner."