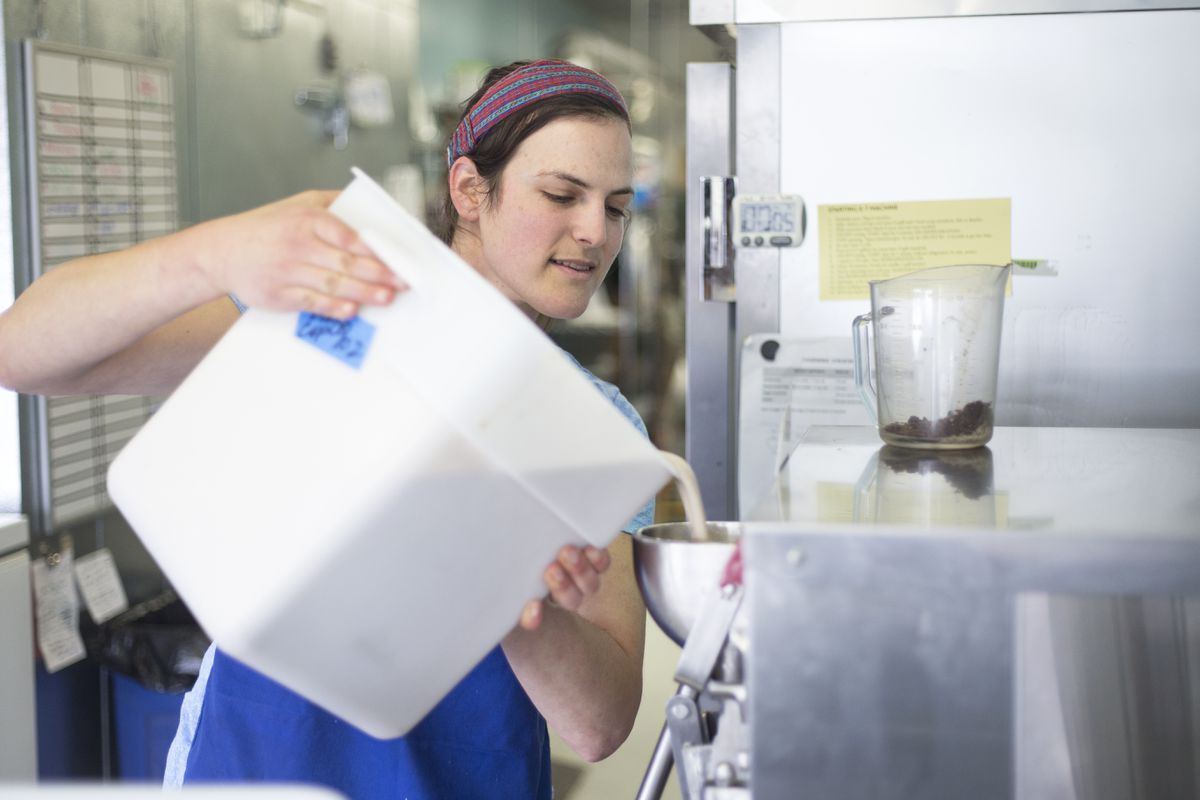 When Elissa Brown, owner of Wild Scoops Handcrafted Alaskan Ice Cream, moved to Alaska in 2014, her life was changing, but ice cream kept her balanced.

Brown, a former middle school science and Spanish teacher, arrived without knowing what her next career would be. She thought about applying to be a teacher again and spent time in a "hodgepodge" of jobs.

While she figured things out, she started experimenting with ice cream, a hobby from her days in North Carolina. She enjoyed playing with local ingredients, like toffee made from birch syrup collected from the forest outside Talkeetna or a swirl of caramel seasoned with sea salt extracted from waters near Sitka.

"It was really grounding," she said.

As Brown, 29, concocted recipes, she kept thinking about ice cream as a business. Anchorage has ice cream makers, but none making small-batch, locally sourced pints.

Her then-boyfriend and now husband, Chris Pike, suggested she give the idea a shot. She bought her first small, commercial ice cream machine in spring 2015 and opened Wild Scoops.

Since then, the brand has evolved into one Anchorage's most recognizable — and popular — ice cream shops.

In the beginning, Brown would churn 12 to 15 gallons of ice cream a week in a machine that made less than a gallon at a time and store it in one 7-cubic-foot chest freezer. Brown's eclectic flavors — recent offerings include rhubarb crumble and Yukon Gold, which has toffee-coated potato chips — have grown a loyal following in Anchorage.

Since then, the business has grown from being at the South Anchorage Farmers Market, pop-up events and a few wholesale sellers, to having a dedicated downtown "scoop shop," open six days a week since May.

Brown's company serves hundreds of cups and cones a day. She and her staff of 20 have a 5-gallon machine working almost constantly. They've made as much as 200 gallons a week — and sometimes that's not enough, she says. She's up to at least seven freezers, including a walk-in freezer at her Fairview test kitchen.

Brown worked at Fire Island's front counter for six months in 2015 and developed a mentorship with Fleischman that continues today. Fleischman said they often discuss issues related to starting a food business in Anchorage — whether that's sourcing ingredients or navigating the city's food and building codes.

She said it's not uncommon to see Brown scooping ice cream at the South Anchorage Farmers Market and recommending flavors to customers. She will sometimes put aside a pint of someone's favorite flavor, knowing they'll want to pick it up.

"So much of the world doesn't even know your name, but here's someone who saves a pint of ice cream for you," Fleischman said.

That personal attention seems to have paid off with a loyal following.

Business was steady at the downtown shop on a recent cloudy Wednesday afternoon, with dozens of people trying flavors and remarking on the smell of freshly made cinnamon and star anise-spiced waffle cones. Leah Knight, the scoop shop’s morning shift lead, said almost every evening starting around 6 or 7, the line wraps down the block, rain or shine.

The counter workers keep track of record-setting days. On July 23, the shop served 381 waffle cones and a record 99 "baked Alaska" cones — a single-scoop waffle cone topped with a swirl of torched marshmallow cream. The Fourth of July holiday set a record for the number of cups and cones sold, over 800. Knight estimates that thousands of free samples are given out every day.

Jasmine Hatton, 29, and Wil Brown, 28, walked several miles to downtown recently to get a scoop while waiting for their car to get an oil change. Hatton said she has been going to the farmers market stand almost every Saturday.

She tries to get a new flavor every time she goes. Last Wednesday she sat on a small bench outside the downtown shop, eating two scoops in a cup — red raspberry sorbet and cardamom.

"I've never had one that wasn't good," she said.

Stephanie Thomson and her twin sister, Melissa Montgomery, 32, were downtown shopping for souvenirs when they stopped into the shop with their daughters. The sisters shared some Sitka Swirl while Thomson's daughter, 2-year-old Olivia, had vanilla, and Montgomery's 6-year-old daughter, Lillian, devoured a kid-size chocolate cone.

Thomson moved to Alaska in October 2016 from Houston. She started going to the South Anchorage Farmers Market and quickly became a Wild Scoops regular.

"To us, it's already an icon," Thomson said.