The internet loves this apple pie recipe and you should too 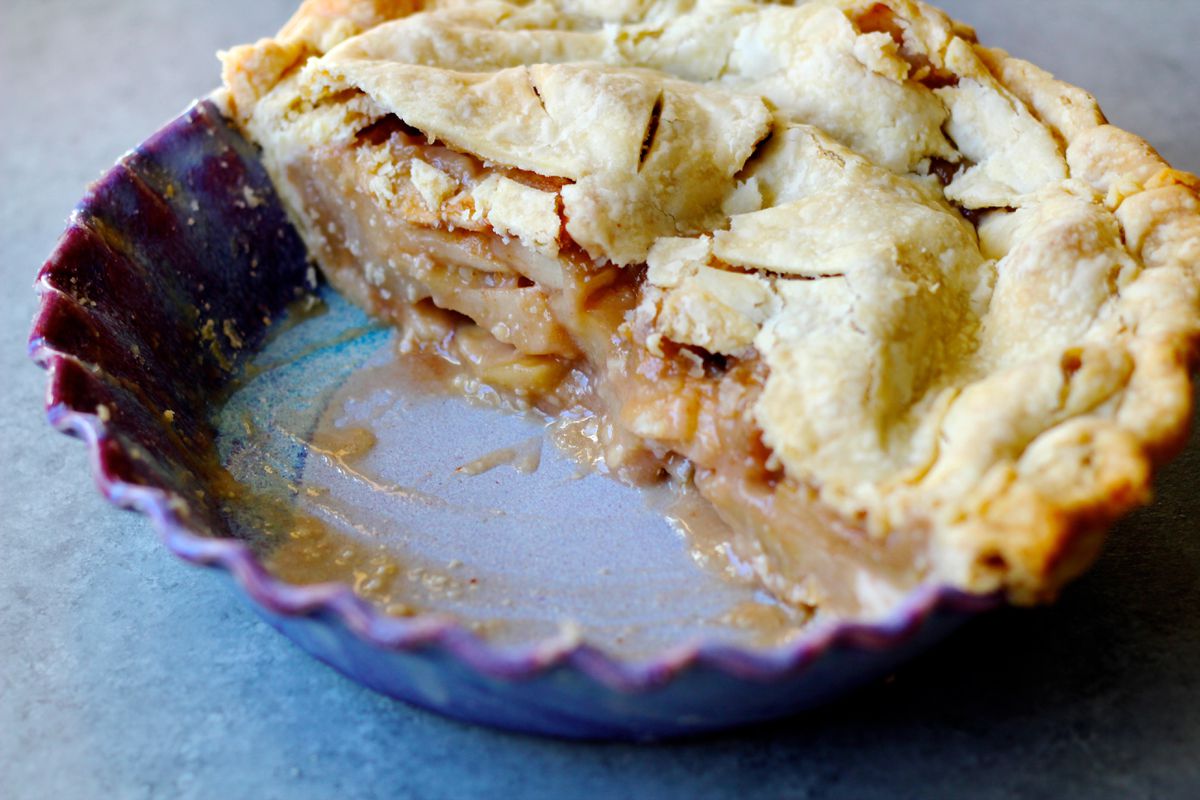 I've been making an adaptation of Grandma Ople's apple pie from Allrecipes for so many years I don't recall ever having made a different one. The recipe has 10,000 comments and has been made at least 20,000 times.

This week, my wife and I started making my version, with a dough for the pie crust, a butter and leaf lard  (rendered pork fat) version from The Art of the Pie that she had made several times before. As anyone who makes pie crust often knows, it's different every single time, regardless of whether you use the same recipe (the author of the recipe we were using even said so).

She wiped down the counter, readying it with flour and a rolling pin while I sliced apples and dusted them with cinnamon. When the dough was chilled and it was time to roll, it broke and tore and crumbled. Frustration set in. This is why people are afraid of pies. Pouring rain gave way to a howling windstorm outside.  Was it the weather?

I grabbed an edge of the pie dough and popped it into my mouth. There was an unwelcome flavor. What was it? A faint hint of cleaning spray. I asked my wife if she had sprayed the counter before rolling out the dough. "Yes," she answered, casually, before she realized why I was asking.

She tried a bite. I tried to lighten the mood by joking that I'd write a recipe for Windex-apple pie. My timing was off and she was too discouraged to think it was funny.

Later on, once we had some workable dough, we set the oven to preheat, and I mounded the apples into the dish. The recipe called for 8, which was clearly too many or my apples were too large. I hadn't intended to be making a mile-high apple pie. But alas, here we were. While we were rolling out the uncooperative top crust, trying to bend it to our will, I glanced over to see if the oven was preheated. Instead of displaying a temperature in bright green digits, there was nothing, just a black screen. The power was out.

It was 9:30 p.m. before the power was on and the gigantic apple pie emerged from the oven. We were not optimistic as we dished up a steaming slice to share. One bite in, we forgot about the stubborn pie dough, the damn cleaning spray, and the power outage. The apple pie tasted divine.

Some notes about this recipe: Grandma Ople's recipe, as written, has no cinnamon or pie spice. There is some discussion about whether that was an inadvertent omission or whether it was meant to be. I've made it without cinnamon and it's lovely. Feel free to try it just as written. I added cinnamon this time around, but I recommend adding it to the apples, not to the melted butter and sugar mixture. Also, unless your apples are on the smaller side, you probably don't need 8. Go with 6 or 7 instead. And finally, Grandma Ople's pie suggests a lattice top. But because our pie dough wasn't cooperating, we didn't dare do a lattice top and went with a classic top crust instead.

Preheat oven to 425 degrees. Roll out half of the pie dough and place it into the bottom of a 9-inch pie plate.
In a saucepan, over medium heat, melt the butter. Whisk in the flour until a paste forms, cooking and stirring for about 90 seconds. Mix in the water, sugar, and brown sugar until the mixture becomes syrupy. Turn the heat down to low and allow to simmer.
In a mixing bowl, toss the apples in cinnamon until coated. Mound the apples into the pie plate. Pour the hot butter sugar mixture over the mound of apples. Place the top crust over the apples and crimp the edges to seal. Slice 4-5 vents in the top of the pie.
Bake the pie for 15 minutes. Reduce heat to 350 degrees, then bake another 35-45 minutes, until crust is golden and the apples are tender. Place the pie on a cooling rack. The pie slices best after it has cooled and set. Great served warm with vanilla ice cream.