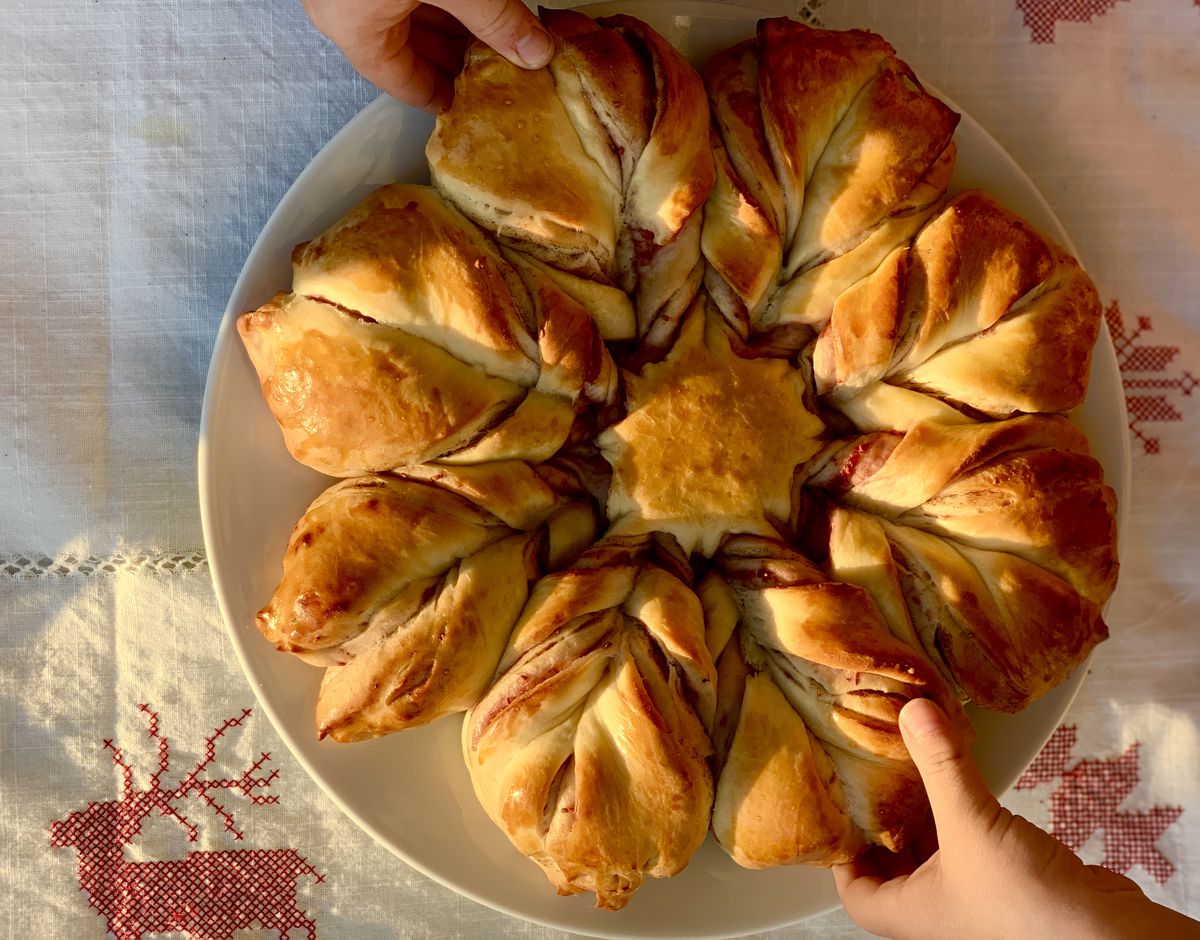 Here’s a flavor that’s pure Anchorage nostalgia for me: sweet rolls from The Bake Shop in Girdwood. I don’t think I have skied since I panicked, alone, at the top of the Alyeska chairlift when I was 9. (Thanks, Dad, for ski-carrying me down the mountain. I see now how hard that was.) But I have spent A LOT of hours of my life in Girdwood, killing time while family members ski. Those hours taste like a certain soft, not-too-sweet, anise-scented dough, threaded through with cinnamon and raspberry jam, that you can get only at The Bake Shop. I need mine with a great big smear of salty butter.

I have been riffing on star-shaped breads a bunch lately. They really aren’t that hard, and they look cool and make a great gift. Recently, I decided to do a mash-up Bake Shop tribute star. (Their sweet roll recipe is online at thebakeshop.com if you want the real thing, btw.) I don’t glaze mine or sprinkle almonds on top, favoring butter, but you could do that if you wanted stay closer to the original version.

This dough recipe is really flexible and forgiving. Some people can’t deal with anise, and you can absolutely leave those spices out. You make your star savory with pesto and goat cheese or Parm. You can make one with Nutella. It’s a great thing to bring to a Christmas party. The main thing, though, is you have to leave yourself time for the dough to rise. If you want help with how to form the star (it’s easier that it looks), there are many videos on YouTube.

Juice of one lemon

To make the dough: combine warm milk, sugar, melted butter and yeast in the bowl of a standing mixer. Wait about 10 minutes or so, until the yeast is bubbly. Attach the paddle attachment and mix in the eggs on low speed. Add the salt and spices. Add the flour a cup at a time until a soft dough forms. Remove the ball of dough from the mixing bowl, scrape it out, spray the bowl with cooking spray, and return the ball to the bowl. Cover with a damp dishcloth and put in a warm place. Allow to rise for an hour until it doubles in size.

To assemble: Make the filling by combining the melted butter with the brown sugar and cinnamon, and set aside. Turn the dough out onto a sheet of parchment. Slice it into four equal pieces and gently shape them into balls, taking care not to over-handle. Roll the first ball out on the parchment until it’s a rough circle, about 9 inches in diameter (you can use a round cake pan for a guide if you want). Place the whole thing, parchment and dough, on a sheet pan. Spread with a nice layer of the cinnamon mixture. Roll the next layer on a new piece of parchment and turn it over onto the first cinnamon-covered layer, carefully peeling off the parchment. Spread it with a thick coat of jam. Repeat with the next layer, spread with cinnamon mixture. Finish with the last layer. If you’d like, you can place a 9-inch cake pan over the stack of layers and cut around it to make a perfect circle. I prefer my stars a little more free-form.

To form the star: Lightly press the base of a small, round drinking glass, roughly 2 ½ inches in diameter, in the center of the stack of dough sheets. That part won’t be cut and will become the center of the star. With a large knife, big pizza cutter or metal pastry scraper, working from the edge of that circle to the edge of the dough stack, make four slices like a clock, at 12, 3, 6 and 9, cutting into four equal parts. Then slice each of those sections into four equal parts for a total of 16 sections. Gentle take two sections at once and twist them away from each other twice. Pinch the ends together and tuck them under to form the points of the star. Once you’ve formed the star, brush with beaten egg and allow to rise for 30 minutes. Preheat the oven to 400 degrees. Bake the star for 20 minutes, or until the middle sounds hollow when you tap it.

Optional garnish: Stir together powdered sugar and lemon to form a glaze. Drizzle it generously over the star after you pull it from the oven. Sprinkle with slivered almonds.