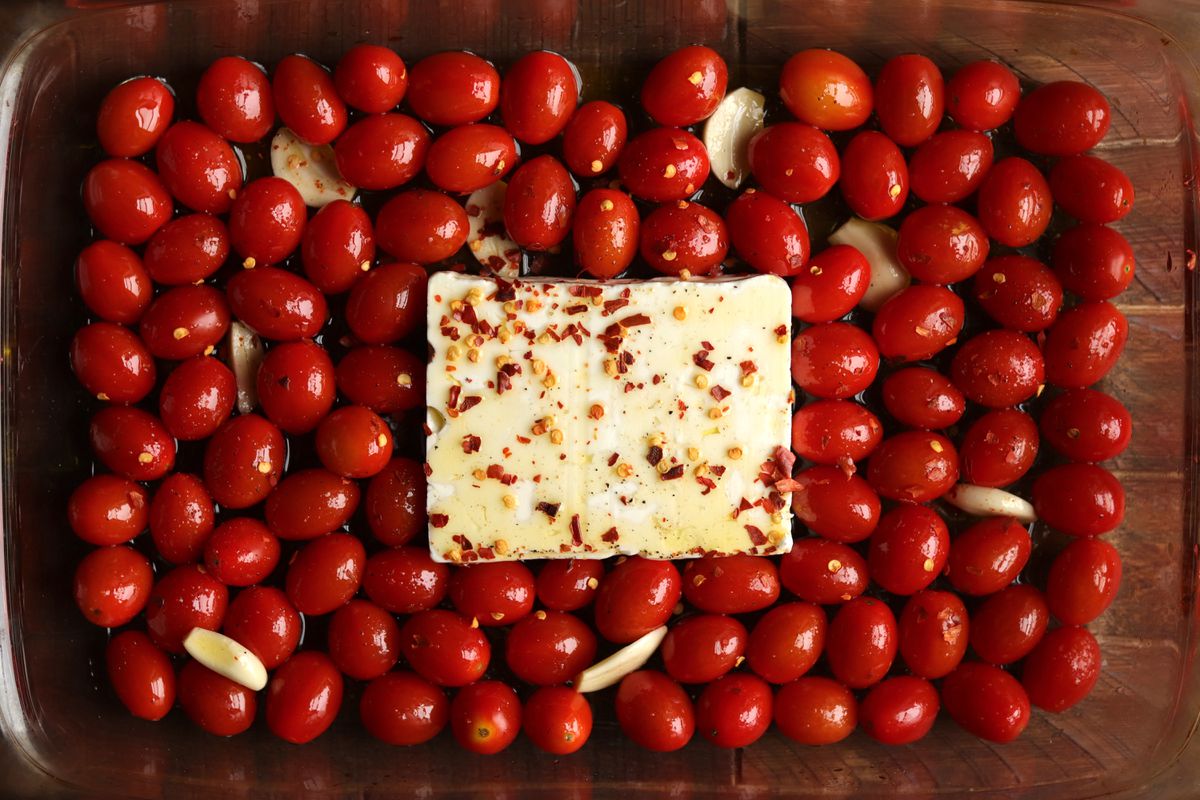 A recipe for pasta with a baked feta and tomato sauce went viral on social media. (Washington Post photo by Aaron Hutcherson)

A recipe for pasta with a baked feta and tomato sauce went viral on social media. (Washington Post photo by Aaron Hutcherson)

My initial sentiment toward viral food moments tends to fall between immense skepticism (the tortilla “hack”) and downright disdain (mermaid toast). The latest trend to hit the social media airwaves, baked feta pasta, is an outlier in that I was a believer from the jump. It’s a low-effort recipe for pasta with tomatoes and cheese - what’s not to love?

Though Tiiu Piret posted a version of the dish on her blog in February 2018, fellow Finnish blogger Jenni Hayrinen is credited with making uunifetapasta (Finnish for “oven-baked feta pasta”) go viral in her country after posting her simplified version a year later. “The stores actually ran out of feta cheese here,” Hayrinen told Today.

The baked feta pasta phenomenon came stateside once MacKenzie Smith, the blogger behind Grilled Cheese Social, posted a video to her TikTok of yet another rendition at the end of January (though she posted it to her blog in June 2019). Smith’s single video has now gained nearly 3 million views as of the writing of this article, with the #bakedfetapasta hashtag collectively amassing 52 million views and counting on TikTok.

The premise is simple: Toss a block of feta, tomatoes and a bunch of olive oil together in a pan and throw it in the oven until softened, before mixing it all together with pasta and fresh basil. There are minor differences based on whose recipe you choose to follow. Hayrinen’s version calls for the inclusion of a fresh chile pepper, while Smith opts for more pantry-friendly crushed red pepper flakes. Other differences arise with the garlic (roasted in large chunks with the rest of the sauce ingredients or minced and added fresh at the end) and basil (stirred into the hot pasta and allowed to wilt or carefully placed on top of the pasta just before serving). Whichever path one chooses to take, the destination is bound to be delicious.

The one aspect of this dish that initially gave me pause was the tomatoes, given the time of year. On the one hand, I prefer fresh tomatoes during the summer when they’re at their peak, but on the other, I don’t think many people will notice much of a difference in the taste of this overall recipe given the assertiveness of the feta. (And only now am I realizing that I grabbed grape instead of the prescribed cherry tomatoes when testing this recipe. Some say cherry tomatoes are sweeter and juicier than their grape counterparts, but I don’t think it makes much of a difference, especially when considering one out-of-season, mass-produced variety versus another.)

Some critics of the recipe can’t get over the perceived grittiness and brokenness of the sauce. However, that’s solved by using the right cheese - Greek feta cheese, which is made from at least 70 percent sheep’s milk, has a creamier texture than feta-style cheese made from cow’s milk - and mixing in some of the pasta water at the end to help bind it all together.

While some written blog posts mention these details, many of the social videos I’ve seen do not, giving those prone to dismiss the dish altogether reason to do so. Don’t blame the baked feta pasta, blame the social media users who don’t - and sometimes can’t, given the constraints of the medium - include all of the specifics in a single TikTok video.

How good? My roommate made a version of this recipe (with zucchini noodles in lieu of wheat pasta) a few days ago before I even knew I would be covering the topic for The Washington Post and was utterly raving about how much she loved it. “It’s so easy even my 10-year-old nephew could make it,” she says. “I’ll definitely be making it again.”

Storage Notes: Leftovers can be refrigerated for up to 3 days.

This viral social media recipe is low-effort and packed with flavor. A simple pasta sauce full of salt, tang, acid and a little bit of spice is made from baking feta cheese, tomatoes, olive oil and crushed red pepper flakes until soft before mashing it all together with a fork. For a creamier texture, be sure to use Greek feta (which is made from at least 70% sheep’s milk) in lieu of feta-style cheese made from cow’s milk. Any pasta shape you have on hand will do, but we recommend a medium-length pasta that holds onto the rustic sauce for optimal enjoyment.

12 ounces medium-length dried pasta, such as campanelle, rigatoni or rotini

Position a rack in the middle of the oven and preheat to 400 degrees.

In a 9-by-13-inch baking dish, combine the tomatoes, garlic and 1/4 cup of the olive oil. Sprinkle with some salt and toss to coat. Place the feta cheese in the center of the tomatoes and garlic, top with the remaining olive oil, and sprinkle the entire dish with red pepper flakes and a little black pepper. Bake for about 40 minutes, until the garlic has softened and the tomatoes have burst their skins.

Meanwhile, bring a large pot of salted water to a boil. Cook the pasta according to package directions until al dente. Reserve 1 cup of the pasta water and then drain the pasta.

Mash the feta and tomatoes with a fork and mix until evenly combined. Mix the sauce with pasta, adding the reserved pasta water as needed if it looks a little dry. Taste, and season with additional salt and pepper, if desired. To serve, divide among bowls and top with plenty of basil leaves.